I have consulted with TiVo to fill in the ......ahem!.......gaps of my recollections from the desert.

First things first: for those Dawg fans who were stuck east of the grand canyon, you would be very proud of your fellow Dawg lovers who made the trip.  By 2pm on gameday, the local bars and eating establishments were readily admitting that they were not expecting 20,000 college football fans clad in red and black. I personally would never frequent an establishment like Hooters.........., but rumor has it they had brought in a total of 3 staff members to handle the Saturday afternoon pregame business. We chose a local establishment called "the Library" as we were looking for somewhere we could read up on the history and lore of Camelback mountain. Instead we found thirsty customers drinking beer that was warm because the cold supply had been consumed by the big machine in red and black that had come down the tracks.

Can you imagine the restaurants and waterin' holes in and around Broad St surviving with such a casual attitude towards the religion that is College Football?

Certainly there is a different attitude towards Saturday pigskin once you get...well...outside of the SEC. The businesses in Phoenix/Tempe and specifically in and around Mill Avenue close to Sun Devil Stadium are likely still counting their profits. What's more is there are thousands, yes ....... thousands of Dawg fans looking for a place to sell the remaining ASU season tickets they own. So if you are planning a trip out west around Thanksgiving..... the mighty UCLA Bruins invade the House of Heat!!

The atmosphere for the game was special. I try to get to at least one away game a year and seeing one this far from Sanford was truly unique. National television, the view and the weather made it even more unique (not to mention being in the same stadium as Kirk Herbstreit's hair, I've never seen a UGA quarterback who gets highlights, must be a Big Ten thing). ASU fans were almost wholly clad in gold....I guess you call that a gold out! I told several of them how exceptional the Pac 10 was and they smiled back. So they have a sense of humor.

Back to business, the game on the actual field was not as close as I predicted of course. Although the game was never really in doubt, the Dawgs never stepped on the Sun Devils throat. I think we can all agree that we were the superior team from the start. We had greater size, speed and athleticism. You can't really hear it on the broadcast, but there was a collective gasp when Knowshon "soared" into the endzone. The O line adjustments seemed to help against a good (not great, but good) defensive front. And the defensive line clearly has missed the talent of Kade Weston. It was good to get him back on a regular basis.

That being said, there was still a lot of carelessness. Untimely timeouts, a couple dropped passes and PENALTIES!!! When I think of teams who are heavily penalized I think of teams I grew up really not liking. Miami comes to mind. I don't know about you, but I'm really uncomfortable with us being ranked so low nationally in penalties. What's more is we will NOT survive against the Bamas, the LSUs and the Gators giving up that many (free) yards. I know a lot of the calls have been questionable....but still...?? What do you think?

Before the taste of this most recent victory gets too stale, let's give some shout outs. The first goes to the Redcoat Band. They do a great job in Sanford of course. But there's something special about hearing our tunemakers on the road. Glory Glory! And to get to sit so close to the redcoats on Saturday reminded me of the days sitting in the student section. The second goes to AJ Green. I imagine nights like Saturday were why he chose UGA so early, but it's also why Dawg fans were so glad he chose us over the team we beat in Columbia, among others.

A BIG Fat Tire Hater shout out to Ann McElroy. A woman not just brave enough to go on a guys weekend in the desert, but to survive it so gracefully.....remarkable! ......and thanks for Tylenol Saturday morning.....   ;  )

And I would be remiss if I did not give a special thanks to the voice of the Bulldogs, Larry Munson. I guess we knew this day was coming. Your voice and "get the picture" will be missed. 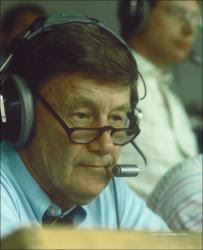 Special Honorary Trivia Question: What was the name of the play that made Munson's Hobnail Boot call so famous? First correct comment wins.....

Bernie
Hunker'd Down by Bernie at 8:30 AM