After all of the interest in my little soccer team it is only fair that I bring ALL of my readers up to date on their success before we turn our attention to our favorite ample bodied Appalachian. The Big Green Machine was as successful on the field as they were remembering that we were the visitors this week and needed to wear the white jerseys for the first time this season. Still tired I guess from running laps all week after giving up so many goals against the Dolphins, the little sweeties gave up a number of goals to a big, physical group of girls that quite possibly may have Chinese versions of "tricked up" birth certificates. Soon our speed, superior skill and consistent coaching took over however. Final score - Capri Suns and pringles for everyone!
Emergency bulletin from Sanford: yellow flags are making the turf die due to lack of sunlight exposure!!
So we go from leading the nation in egregious offenses and total penalties to.......less of an egregiously penalized team. Eleven penalties for 76 yards. Still too many flags, even though two of them were self imposed. As a consolation, Tennessee was penalized 10 times for 96 yards. I went back and checked the video of the MoMass penalty. My first reaction was surprise that he was able to jump back up. Beurlein (CBS color commentator) disagreed with the call of helmet to helmet. In slow motion he may have a point. The bottom line is it was a vicious hit that evidently only knocked the breath out of our senior wideout.
But the most flagrant penalty came at the tailgate. Jenn is assessed the season's first roughing the Bernie penalty. But judging from the reaction, she will gladly take the penalty and the yards. OUCH! To be fair, I had just whipped her at cornhole. However, I did not foresee the consequences............
Back to the game. Well it certainly wasn't the blow out that was predicted here, but it was a win. The Dawgs had a chance to bring a smile to Johnny Majors' face by blowing the coonskin cap off of Phil "Et tu Brute" Fulmer, but red zone woes hurt the Dawgs, as well as those who bet on them to cover the spread. 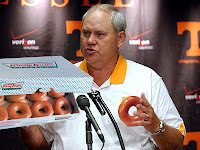 As I checked the box score Sunday morning I promised I would not bash Bobo or Martinez since both the offense and the defense performed so well. Just a sampling of the stats: over 42 minutes of offensive possession, Tennessee possessed the ball LESS than 7 minutes the second half, 1 (uno) yard rushing for UT, 458 yards of total offense, 29 Dawg first downs to their 10. But can someone explain to me the fascination with screen plays so close to the goal line? You know, that fake screen to the right and then a quick screen to the left is nice and flashy.....when it works. Stafford has arguably his best game as a Dawg, but it was marred by two bad calls by Bobo - if you ask me. #7 couldn't have been expecting their defensive end to drop into coverage and has to throw that ball quickly as the play is designed. And the Eric Berry interception was just as bad of a call. Green was outplayed when he had about a 50/50 shot of scoring from the play's outset. For my money, I'd be less upset if we get into the red zone and settle for a field goal after handing it to #24 three times. Much better than a screen pass or a fade route.
And one more (mild) critique of the defense. They did remarkably well against the run, but how much of that was due to Tennessee's apparent disinterest in running the ball? We committed 8 or more to the run and forced Nick Stephens to beat us, we expected that. But Foster touched the ball 6 times, and half of those were receptions. He and Hardesty combined for 24 yards on 9 carries. I'm as proud of Martinez's defense as the next fan, they definitely showed an intensity that was lacking ....I don't know .......say, two weeks ago. But I'm not jumping up and down for joy at our success. Better, MUCH better offensive teams await.
In fact, if you look at the schedule ahead and the one behind, we definitely ate our dessert first 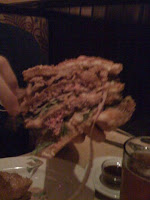 so to speak. Nothing but well built, indigestible, Tempe cheeseburgers ahead of this team of Dawgs. And the injuries continue to mount. Saturday against the 'dores we'll start our fourth left tackle. Vance had done really well, and his season-ending injury will force Searels to ask the most commonly asked question in Butts-Mehre this season, "Tripp! What number do you want to wear this week?"

Your prize is a special one Mr. Wynn. Lost in Mr. Hannon's adaptation of the events leading up to that game against the North Avenue Trade School, is the fact that there were three turkey sandwiches made by Mrs. Seiler back in November of '57. One for Sonny, one for Uga.......and one for you! (Allow 4-6 weeks for delivery, then enjoy!)
Have a great week loyal blawggers. Rest up. The road ahead is filled with adventure, ups, aches, pains, joys, monday evening quarterbacking, downs, fried dill pickles at Gnat's, cornhole, zone coverages, lots of travel, MRIs, yellow flags, sunday evening coaching, PBR and of course, leg tackles!
Bernie
Hunker'd Down by Bernie at 8:48 PM

The only question is, do I really want a fifty-year old turkey sandwich? I mean...

Hope you are doing well. Study hard and tell Josh, Tammy, et al "hello" for me when you see them.