...........by a little gridiron gravy.
'nuf said Monday, right? As long as we're clear on who plays and who stays tomorrow morning, we'll keep this short and sweet. I've got some leftover turkey waiting on me and I'd also like to fit in 18 holes before the rain.
Almost a year ago things were Utopian-like in Athens, at least in the realm of football against the in-state rival. Coach Mark Richt had notched his 7th win in as many tries against the hated bees. Chan Gailey was doing just enough to continue on as the leader of the flats. And although Reggie Ball had moved on, his replacements had not produced a win against the Dawgs either.
Then Gailey was shown the door. I remember a conversation with Chris "Buzz" Miranda during the subsequent search for leadership. I asked him who he liked to get the job. During the history of our friendship we have disagreed on many things ranging from the sublime (whether Joe Hamilton actually played 7 seasons or not) to the ridiculous (who's triple bogey putt was more difficult). It turns out we agreed on one thing: Paul Johnson was the candidate best suited for the job. 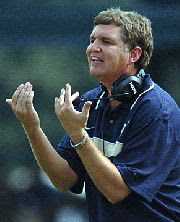 Of course our angles were drastically opposed. He wanted Radakovich to hire Johnson right away. I hoped the talks would break down and Johnson would stay in Annapolis. I tried to place a call to Tech Athletic offices to voice my undying support for Gailey being rehired, but the phone just rang......and rang.
Come to think of it, Miranda? Did you give me the right number?
In the end of course, Johnson was hired. "Buzz" even reports that he was the only candidate of the seven to interview with Prez Clough and was offered straight away. And now on the precipice of another match-up between the Dawgs and Jackets, the two teams stand with nearly identical records.
I've spent a lot of time reading this week. One of the hot topics has been which side needs a win the most. The Dawgs are looking for another 10 win season and a Capital One bowl berth. The Jackets want to beat Georgia for the first time in this millennium.
But it is also worth wondering, who (individually) needs this win the most. BDB argues for Coach Willie. I know that Johnson has marked this game from the time he was introduced as GTs most important. And I know a win tomorrow would cement his first season on the flats as a tremendous success. But Willie doesn't just want a win. He needs it. 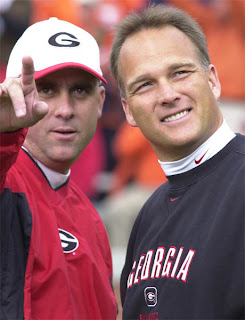 If the Dawgs D can put together a strong performance against an offense that shredded Miami on national TV it wouldn't necessarily put Martinez on a pedestal. But it would dampen the shrieking coming from his critics.
Another question......... which game is more important to Tech: The one between the hedges or the one up in Blacksburg? If given the choice between the two, would the average Jacket fan take a win versus the Dawgs over a Cavalier upset against the Hokies? Just a question.
If you force me to put the shoe on my foot, as a Dawg fan, would I rather have a W against Tech or a W against the gators? Well, ........I would insist on both. : )
The vegas line has shrunk since the beginning of the week. I still believe the Dawgs can put up some good numbers, but if they are to cover the spread (something the Dawgs have a knack for not doing) they will need to tackle .......WELL! Dwyer and any other pigskin carrier that had a turn was rarely touched near the vicinity of the line of scrimmage against Miami. And when they were it was fleeting.
If there is a bright side to facing this offense it is that our defense's Achilles heel this season has been it's pass rush. That will be but a small factor tomorrow. I expect the Dawgs to struggle some against Johnson's triple option attack, but not on the scale that the Hurricane D did.
And I also believe our offense will fair well against the bees' D. I remember Moreno not playing much last year against Tech so I think he will come out hungry; in fact he and the other skill players in silver britches should do very well. And if we can convert red zone opportunities into TDs it should keep our defense relaxed and on their toes.
Dawgs count to eight and send Johnson's Jackets back to Hotlanta empty handed.
Dawgs 28
pesky pests 24
Trivia this week brought to you by Bernie himself. Larry Munson shut off his mike earlier this year and will be honored in between the 1st and 2nd quarters tomorrow. One of his greatest lines came at the end of the '97 Tech game after the pass interference and the Bobo TD pass to Corey Allen. What did he describe that we did with our heart? Winning comment gets a hobnail boot. God bless ya Larry!

If you eat a hamdog, please don't forget your Monday morning cholesterol check. And if you show up at Sanford at 11:30, you will bark like a Dawg.
Bernie
Hunker'd Down by Bernie at 8:01 AM

Might as well close out the season with another trivia answer...

"Here we are only 14 seconds for 8 yards," Munson said. "We spread four men out, the ones in the right are kind of wide. ... Shotgun, Bobo. Bobo going to take it and look and throw it in the corner. And a touchdown! Oh my God! A touchdown in the corner! My God! In the corner. Oh, my, it couldn't have happened! ... Our heart that was torn out and bleeding, we picked it up and we stick it back inside! I can't believe this! We won 27 to 24, and at the end we had no business winning this game!"

Hamdog prep is beginning my friends. Time to fire it up. Just don't tell anyone we will be fryin' them up!!