From the highest ranked team in the nation...... 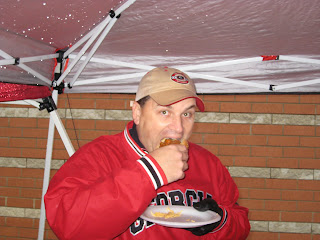 .....to the second best team in the state of Georgia. It's a good thing Georgia State's football team is still in the building phase......

Fans who had withstood dampened tailgates, wet sacks and eggless HamDogs were rewarded with a misleading first half and a lackluster, uninspiring second. I'll be glad in years to come when I can tell my daughters I was there when Larry Munson walked out onto the playing field for the first time during a game and I stood to tip my hat. And I'll be proud to also tell them that I saw Mohammed Massaquoi nearly single handedly beat Tech with a stellar performance in his last game in Sanford.

As the final seconds ticked off the clock Saturday I tried to find Stafford and Moreno on the field. I figured this is likely the last time to see them dressed out between the hedges. I wasn't able to find Stafford in the chaos, but Knowshon could easily been seen sprinting out to the center of the field as a large number of Tech players converged on the "G". I also noticed that he was largely alone and that he was pretty effective in convincing his opponents to celebrate in other ways.
Many Dawg fans spent the remainder of the weekend finalizing their Santa Wish Lists. Knowshon returning for '09 had likely been atop most lists. I would reckon that now "Martinez leavin'" tops the lists. Richt quickly quashed that debate, but guaranteed changes in practice habits AND results next year. Hopefully tackling teammates to the practice turf on Bloody Tuesdays instills some intensity that can last for an ENTIRE game. 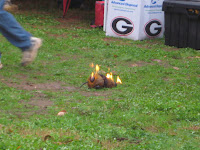 Against Tech we built a pretty good lead heading into the locker room. In fact I was pretty pleased with the defense that had allowed a mere 6 points in helping build a 28-12 halftime lead. But whoever spoke to the team at halftime should be checked for an engineering degree. That third quarter was pathetic. By the fourth we suddenly realized that just going through motions wasn't going to garner that 8th consecutive win, but by then it was too late. The killer buzz had turned into Killer Buzz that would not be denied.
Sure, if we had gotten one more shot in the waning seconds we may have put together a miracle. But MoMass and Stafford can only do SO much.....right?
And let's give some props to our beloved senior wideout. Eleven catches for 180 yards and 3 TDs. Wow! A day to remember for Massaquoi. I'm just glad his team gets one more chance to send him out a winner.
And speaking of that upcoming bowl game, remarkably Saturday's result (likely) did little to affect our destination. Of course it all trickles down from the top. If Bama loses to floriDuh they will surely get an at-large BCS (Sugar Bowl) bid. And the same can be said for the reverse scenario. So even with the loss to Tech, it's hard to imagine the Dawgs not going to the Capital One Bowl to face Michigan State. The only team within one game of the Dawgs is Ole Miss and they seem bound for the Cotton.
I had made the argument that Martinez needed this game more than the yeller jackets. I stand by that assessment, but it is apparent that Martinez's D lacked the ability to prove they could earn it. Halftime adjustments have been an area where our coaching staff has been getting outdone all season (see Jacksonville, Auburn, Kentucky). Saturday around 1:30 we had the chance to step on these insects and notch that 10th win. We were up two big scores and had just exploited a depleted secondary. What happened? 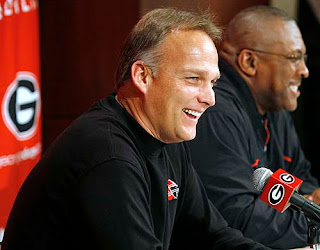 Would that be a bitter pill for Richt and especially Martinez to swallow? Sure. Would it keep the staff intact, the '09 commitments and the returning roster happy? To quote Sarah Palin, "you betcha!" Those that want Martinez gone are entitled to their opinion and I have certainly chimed in on that side of the field. But who would we get in his place? Muschamp was the hot name and is now off the market. And after seeing Texas give up big numbers (albeit to very good offensive teams) I'm not sure that is who we want. Plus he didn't exactly turn the SEC offenses on their ear while at Auburn. John Chavis is looking for a job off Rocky Top. He kept the Fulmer ship afloat for over a decade. Or how about stealing one from another SEC school: Ellis Johnson at South Carolina or the gators' Charlie Strong? Yeh right!
I'll take Richt's decision to keep Martinez, afterall it is his staff. But something's missing. It's been missing all season. We used to GATA. Now we just watch their ass run towards the end zone. It can be argued that some change is necessary. Give Garner a chance at an expanded role.......
Enough of the bad, let's get to the ugly. Suspensions:
And due to the weather and dire conditions we must give a few shout-outs:
It's been a long trip this season BDB readers. What started as a pea brained idea, grew wings with the help of VP Trammell and now our readership rivals that of the Saskatchewan Gazette's Op-ed pages. BDB will be back on occasion in the month of December with ramblings and other general nonsense. If you're interested in that sort of First Amendment entitlements, y'all come back now, ya hear? 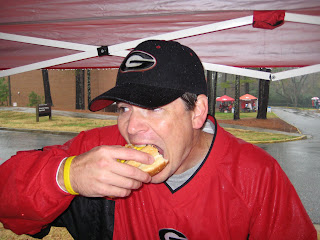 Bernie's Dawg Blawg - it's what Jefferson and Washington were thinking of when they put pen to parchment and it's what Al Gore envisioned when he sat at his desk to invent the internet.
What better way to finish off the regular season than with a Chris "Search Engine is my middle name" Nama BDB trivia victory. His fingers did the typing and his iPhone discovered that "we picked it (our heart) up, and we (stuck) it back inside" when we nearly lost on the flats back in '97. Congrats my friend. It is no longer legal to mail hobnail boots as they are considered a weapon in SEC land, so you'll have to stop by the BDB offices to pick up your prize. Just call Betty, our front office admin asst at (800) BDB-rocks ahead of time to give her your boot size.
Happy Holidays readers! Next Monday we'll take a look at the juniors around the nation who may take their talents to the pro level. Your homework for next week:
We here at BDB wish you and yours all the egg nog you can swallow and as much fruit cake as you can stomach. Merry Christmas to all and to all a good defensive bowl game.

Bernie
Hunker'd Down by Bernie at 8:48 PM

It was a pleasure to help you take down the "machine" in cornhole!

Yup. I'm pretty sure they cheat. That leg kick Nama has is his trademark but he has side-swiped me with it a couple of times and that's at best poor sportsmanship.

I agree. A "brushback" is perfectly legal and understandable, but when physical contact is used, well, that is just plain dirty.