Yes, Virginia......Bernie is Coming for Christmas 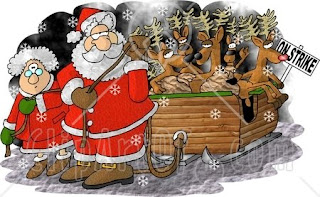 Surely you've noticed the haste with which this edition has found its way to the foot of your tree. BDB will be taking a much needed break to venture north along that beautiful stretch of interstate between the Mall of Georgia and Petersburg.

The journey may begin Friday afternoon, but between potty stops, gasoline fill ups, the notorious DVD switch from The Little Mermaid to Madagascar, dinner at some Wendy's the '90s left behind, the less popular DVD switch from Madagascar to Cinderella II and a Charlotte NC traffic jam or two .......

It'll be early Saturday morning before the Tahoe loaded to bear with suitcases, Christmas presents and empty french fry containers pulls in to the in-laws. How Santa does it, I'll never know.

News outta Athens this week..........Stafford, Allen, Atkins and Moreno have officially dipped their toes into the waters of the NFL. They'll have until January 15th to decide if the feedback they get is worth putting on their NFL swimsuit a year (or two) early or not. For the best rundown, check out David Hale's Media Notes on his Bulldogs Blog. (BTW - I asked DH about Owens, he said he would check the next time the big guy was available to the media, likely Friday. UPDATE - Bulldogs Blog reports that Owens says he's definitely staying. Use the link to discover another nugget.....)

This week I've begun reminiscing of a few years ago when David Pollack was faced with the decision of forgoing his amateur status for NFL stardom or staying in Athens to study and attend class. Particularly with Stafford and Moreno, there has been this feeling since '06 like they would leave 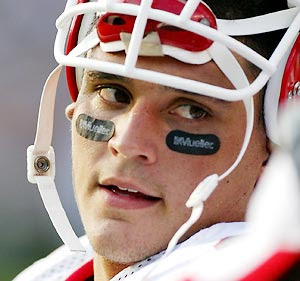 Athens as beloved as any other Dawg. Should they choose to go, it won't take as long to clean out their locker as it did Greene, DJ, Pollack, Musa, Brown....others. Knowshon would leave some breath taking highlights, Stafford some impressive throws. (image SI.com)

When Pollack decided to stay, he became even more endearing to the Bulldog Faithful. Willing to sacrifice a nice paycheck for another year on campus was both enlightening and encouraging amid today's society of instant gratification. 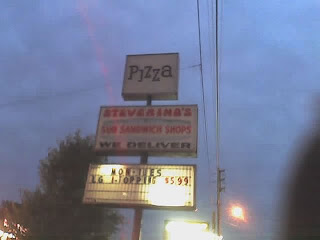 Sudden Death Playoff Trivia - It's been two issues of BDB since the question was asked and we spent some time airing some grievances Monday. Well........turns out BDB does indeed have Seinfeld fans that thumb through its pages. Within hours of Monday's blog posting, we had a number of comments and emails, like .........nearly eight.
YadaYadaYada....Let's get to the prizes. The following made Bernie both chuckle and laugh uncontrollably, in no particular order:


Enjoy your Festivus Pole everyone. At the BDB family dinner, you all will NOT be listed among those who have disappointed me this past year. You're all winners in my book! 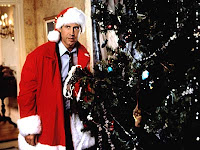 Trivia - When Rusty says, "Dad, this tree won't fit in our backyard. " How does Clark Griswold respond? Winner gets a brand new dual bag vacuum....to give to your wife for Christmas. "It's the best vacuum cleaner you'll ever have baby."

And with that another chapter of BDB comes to a close. We'll be back after a long weekend with a special Holiday version of BDB. Until then I leave you with the wise words of George Costanza: "Do you ever get down on your knees and just thank God that you know me and have access to my dementia?"

Gotta run. These pretzels are making me thirsty!

Bernie
Hunker'd Down by Bernie at 1:07 PM

Dude - I especially had to laugh at the Plax comment!

And now I am severely craving Steverino's. Hmmmm, only 616 miles -- I could be there in just over 10 hours if I wear Depends and don't stop for bathroom breaks!

Oh! And Nama cheats. But fortunately for him, cheating is encouraged with BDB trivia. : )

I hope cheating is encouraged! I hope you didn't expect anyone to just KNOW the train that Sonny took Uga to the 1957 Tech game on. I had to get lucky by finding an eBay item that listed this train.

As for favorite Dawgs, you're going to laugh at this, but mine is Demiko Goodman, current #85. I ate lunch with him one day at Snelling. Since I've never eaten with Stafford, Greene, or Herschel, I had to go with Demiko. Aside from him, though, I'd have to say Herschel Walker. I mean, who else can get away with challenging Steve Spurrier to a fight? Really?

Adam, you're being modest. You and I both know that the Nancy Hanks II and other trivial relics are easily retrieved from your memory banks.

And I like the shout out for Demiko. Good choice. The next time I have Herschel over for lunch, I'll make sure to invite you. I'm not a big boxing or MMA fan, but if Spurrier were to ever take #34 up on his offer, that is one fight I would be willing to pay to see.

Whoa, whoa, whoa!! Simmer down on the cheatin' talk! If you ain't cheatin', well you ain't tryin!!!

As for the poll, I didn't see it. Must have been too busy figgerin' out the trivia answer. Oh well...

I can't believe Zeier didn't make your list to start... He has always been one of my favs. Mike Robertson always said Patrick Pass was our savior 'tween the hedges...

Larry Bowie! He had a pretty respectable career as a Redskin after suitin' up in the silver britches.

Zeier and Pass...well, what can I say? They just didn't make the cut. Great players though.