Time to give some props:

Congrats to Allen Randall of Lawrenceville as this week's winner. He had the quickest fingers, dialed up some Dawg history and found that the last time we travelled this far for a regular season football game it was a loss to USC 10-3 in southern California. I guess it's possible he knew that off the top of his head...... Allen, check in with the Head Chicken's athletic office to claim your prize.

Joe Luskus, formerly of Waterloo, digs up this tidbit from College Football News. There’s the classic line that the only person to ever stop Michael Jordan was Dean Smith. I’m starting to get that feeling with Matthew Stafford and Mark Richt. Against South Carolina, Stafford threw a ball to A.J. Green up the right sideline that maybe ten current NFL quarterbacks could’ve made. Stafford also showed off surprising straight-line speed on a key run. However, with this Bulldogs team, bombing away takes a back seat to the running game. I guess we'll soon find out if the "coaching reins" continue to restrain our NFL bound phenom.....

And while we're handing out kudos.......Cord Trammell of HamDog U is BDB's first VIP subscriber. Cord is also the copyright holder for BDB and has managed to keep up to date on "all things Dawg" while not getting fired....

The Sun Devils peeked ahead a week and got caught by UNLV last week. The Dawgs left Columbia still hungry, or maybe that was just the fans.... ASU Head Coach Dennis Erickson likes Stafford's arm and says it is as strong as any he has ever seen. Hearing of this critique,

Stafford fired back with compliments to the job Erickson has done turning around the ASU program. SIMMER DOWN gentlemen!

Meanwhile Coach Richt decides to treat this like any other trip to the southeast and leave on Friday and return after the game. Leaving a couple days early in order to acclimate to the local weather was ruled out when Richt's staff was able to acquire enough hairdryers and underclassmen to stand aside the practice field to simulate the "dry" heat of the 'zona desert. Me...I'm just packing two anti-perspirants.

What’s my take?.......glad you asked. The Sun Devils are surely mad and have been waiting for this game for some time. I expect them to come out focused and CMR and staff better have the Dawgs ready to match that level if they are to stay in this game. 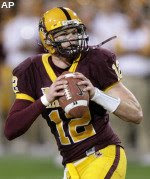 Carpenter is no Smelley and has been waiting to go up against a team of this caliber (aside from USC of course). And from what we saw last week he could have plenty of time to evaluate our zone and make a decision on which receiver to hit.

But I think Coach Martinez will show some variability in his defensive schemes and bring some pressure. Between that and Rudy’s eagerness to shine I think he will make some mistakes. The temperature in the desert will not be a factor. It’ll be in the upper 80s/low 90s by the time the bands finish playing at halftime. The scoreboard will heat up late though as Blair Walsh steps in to make a late field goal that stretches the UGA lead to 24-20. ASU gets the ball back with a little over a minute left, moves into Dawg territory but is not able to produce a TD.

Game over! Cactus juice flows freely! Last one to leave Tempe, please make sure Knowshon is on the plane……..

Bernie
Hunker'd Down by Bernie at 4:24 PM

Chicken dinner was less than filling......

I was more than a little off in my prediction..... and my vision of the hook and lateral never came to fruition. If you're talking to your bookie based on my opinion....you need help!

After watching the game again.....

Offensively, the drops stand out. Stafford made some great throws that didn't show up in the stat sheet yesterday. But the playcalling late in the game really frustrated me. Either Bobo doesn't yet trust the O line to knock guys off the blocks, or he trusts the passing game a little too much. When Curran layed the wood at the goal line and Asher recovered the ball in the endzone, how many expected us to really grind things out, move those chains and chew up even more clock? Mimbs gets the punt of a lifetime and the once again we're back where we started. UGH!!

Our defense played "bend but don't break" style which is kind of like eating a dozen hot wings as a late night snack. Overall - satisfying, but once you finish you feel like you have two stomach ulcers battling for gastrointestinal supremacy! Let's give credit to the defense for only allowing
7 points on the road. I agree with some other things I've read that Martinez's plan was to take away the big play and make the chickens work for everything they got. But gamecock mistakes contributed to our success. Our front four provided just occasional pressure which resulted in a couple of incompletions and NO sacks. We're about to go up against a couple experienced QBs in Carpenter and Wilson and they'll lick their chops standing back there unabated. We must develop a pass rush with our front four if we are to contend for the East title.

And we have to stop causing those little yellow flags out of the zebras pockets if I am to survive this season. Seriously....it's nervewracking!! The roughing the passers I thought were just good football, but we can't be giving up 112 yards to some of these teams down the road.

So....time to start packing for Tempe. To account for air travel, this week's BOLD prediction will come a day early. To tide you over until Thursday, here's some trivia, brought to you by Old Crow. Winning comment gets a slightly misshapen Gamecock visor...

This weekend's road trip will be Georgia's longest regular season trip since 1960. Who was the opponent and what was the result?
Hunker'd Down by Bernie at 7:31 PM 1 comment: