No Shortage of Orange Overalls These Days

Yes.....times is tough in the land of ole rocky top. Pass the jug and the pork rinds.
I guess word of the BDB suspensions last week eventually reached Knoxville, by telegraph. By holding our offensive and defensive coordinators accountable for their part in the loss to Bama, I

had no idea it would be such an inspiration to Fill-it-up Fulmer that he would start holding his players accountable for academics of all things. Two reserve linemen couldn't pull their Hillbilly Literature grade up to passing before travel arrangements had been made for Athens, so Fulmer left them behind. Let's hope the extra effort paid to this one class doesn't affect their grade in Appalachian Anthropology - a Study in the Dynamics of Shallow Gene Pools.
CMR was also evidently inspired by the BDB suspensions as he dropped two schollies this week for conduct unbecoming of a bulldog. Baldwin had already been suspended indefinitely and really wasn't much of a surprise. Hill had yet to catch a ball (that this blawgger is aware of) mostly due to injuries, after redshirting last year. It's never good to see a young man lose his scholarship, but on the bright side we're slowing making room for a full class for next year.
Dawg fans will once again descend on Sanford tomorrow afternoon in hopes of cheering for more than just their team's attendance. BDB's inside source says those black jerseys have been locked up like a prisoner in Johnny Cash's own Folsom Prison; who knows if they'll ever be seen again. One Dawg who we'll see more of is Brannan Southerland who returns after a second foot surgery. Chapas has certainly filled in admirably, but Southerland will be the offensive captain Saturday without having played a single offensive down this season. Tells me something about how much he is respected by the players and the coaches.
Another Dawg worthy of respect is Bruce Figgins. Saturday will possibly be his last game of the season, before (likely) electing for season ending shoulder surgery. With Chandler out this week, Tripp still learning to adjust his size to the position and White still on the smaller side of a tight end frame, Figgins will suit it up and play through the pain. Maybe a cortisone shot will help too.
Before we get to this week's prediction (to tell the truth I'm stalling until inspiration hits me...) I want to thank everyone for the outpouring of support for my little soccer team. The ideas for teaching them to leg tackle were as numerous as they were humorous. Devoted reader Paulie Walnuts even suggested he and Christafuh coach them up this week on how to make the other team sleep with the fishes........unfortunately this week's practice was rained out.
I know!! I was as stunned as you are. Soccer can't get rained out! Rain makes sports like soccer, football, curling, bossaball more interesting. Not to mention it would be easier to leg tackle on the

slick surface. But evidently girls don't like their hair wet. Not to mention their Hannah Montana soccer shoes. All I can say is the first "cutie pie" to give up an uncontested breakaway, doesn't get a Capri Sun after the game.
OK....back to the gridiron. I'm relentless in my optimism for the Dawgs. I was the guy that predicted we'd surprise Spurrier's gators 'tween the hedges back in 1995. You know...when the visor hung 50 on us. Dumb, huh? Well not as dumb as putting a trampoline on a volleyball court.

But even without my half full glass, there are just some games that smell like a victory to me; this is one of those games. But everytime I begin to convince myself that we're about to serve a heaping helping of whoopass to the great big pumpkin, I remember last year in Knoxville; 2006 in Athens; and two weeks ago against Nick Satan's Tide. In 2006 we rolled into the locker room at halftime riding high. The second half was like getting a root canal without the goofy gas (Tennessee fans use Wikipedia .......ooops...sorry!..............use an e n c y c l o p e d i a to research this reference to dental care as I am aware that such a thing has become obsolete in your.....uhm.....neck of the woods). And last year the bus driver was the only one on top of his game. He drove us to the stadium. Not much else positive happened after that.
But there's that smell again. Do you smell it? It's not an upset. It's not the potpourri Jenn put in the half bath. It could be the bratwurst.......
But I believe the week off cures what ails us. I'm eager to hear the trumpeter in the southwest corner of the stadium. I wanna see UGA VII show a little spunk and piss on Fulmer's sneaker. I can't wait to feel the stadium erupt when Southerland bellies up from two and half yards for a TD. Oh yeh! It's more than a smell of victory now. I can taste it. Dawgs send the vol fans to their local flea market to sell their orange overalls, broken 8 track player and likely their coach's playbook.
Dawgs 41
descendants of their uncle and first cousin 14
This week's trivia is brought to you by Ainsley. I've challenged her to dig deep into Daddy's Dawg library for a doosie. She tells me we won't be disappointed. Take it away sweetheart.
"We love Uga! And we really don't like the yellow jackets. But in the 1950s they dominated the

Dawgs and entered the 1957 contest looking to extend an 8 game losing streak for the Bulldogs. Theron Sapp scored the winning touchdown and has since been called The Man Who Broke the Drought. (you're doin' great honey!) Mr. Seiler brought Uga I to the game at Grant Field, but couldn't make it by car. He and Uga rode on a train and each had a turkey sandwich for lunch. What was the name of the train they rode on to witness one of the greatest games in Georgia football history?"
Nice work Ainsley. Now go tackle your sister. Big game Saturday morning.
See the rest of you 'tween the hedges!!
Bernie
Hunker'd Down by Bernie at 2:01 PM 2 comments:

Rookie blawgger mistake using my best Fulmer jokes during a bye week. But fear not Faithful Reader, I'm sure something spontaneous will fill the void that is.........that is.......ahhhmm......what was I saying?

Sorry if my mind is a bit more cluttered than usual. I was able to devote all of my mental energy this weekend to the 4 year old girls soccer team I'm coaching. Their progress since the beginning of the season astounded me! Sure, I proudly tell the parents and other more casual observers that it must be the superior coaching, but deep down I realize that is about as true as saying Coach Fulmer's fanny is just hot because of the extra spicy hot wings he ingested for breakfast. Tennessee - 2-3, 0-2...OUCH!! Word outta Knoxville is Fulmer hasn't had a Cracker Barrel tab comp'd in weeks.

Back to soccer.....practice is tomorrow and I'm wondering what to have the little Pele's in pigtails do. They scored like 20 goals Saturday. To make things more challenging, Ainsley's Anma and 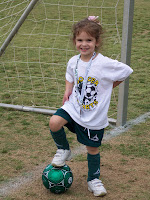 PawPaw will be in attendance this Saturday morning to see their little grandgirl take the pitch, or FIELD for all of you soccer novices (HEY! I'm no warm body type of peewee coach.......I study futbol history. And my wife/team manager also helps by keeping up to date with everything David Beckham....so dreamy!) Offensive drills seem too mundane for this crew of GOal getters. So I think we'll focus on the art of taking the opponent down with a combination of momentum, timing and four year old legs. You know! Let those other little girls in ribbons taste some turf. We may have scored 20 against the dolphins, but we gave up nearly 10. That's gotta stop before the 2016 World Cup.

And......back to (American) football. Some interesting articles seen 'round the net and in my driveway since we last talked. Probably my favorite was this one on Knowshon Moreno. Prior to the season I recall debating with Mr. Boston himself, Joe Luskus, on the likelihood that 24 would return for his redshirt junior season. His main point was that with all the talk this season of national championships and #1 rankings, really next season should be the season things really line up for the Dawgs. Two wild cards though...... Stafford and Moreno are both eligible to depart if they so desire. When the debate turned to Moreno, I was on the side on the fence that said he would not return in 09-10, assuming he had the kind of RS Soph season he had as a freshman. It's a lot easier for a running back to jump to the pros early and make a difference. And with another stellar season, it would seem a surety that Knowshon would be a top 10 pick, easy! Joe called me a dumbass - which is his soft-hearted way of saying Knowshon wants his degree and is on track for finishing after next year. Mr. Hummer's story seems to support that side of the fence.

In a separate conversation with Mr. Boston, he seemed cautioned that although the vOwels are lower than low, they always play TOUGH in the trenches. And......that's an area that didn't go so well with the last team we played. Fulmer may have trouble finding his whistle underneath all of the chicken bones (they really just write themselves folks....), but his linemen play a physical brand of football on both sides of the line. I've been able to see them play some and it seems like the reason for the record has more to do with their lack of difference makers. But the big guy is not worried about his quarterback, at least he's not mentioning it to the media. And for all of you Erk fans, here's a piece on another Georgia legend now leading the Longhorn defense. Although Will Muschamp never played under Coach Russell, it seems the former D captain and four year letterman may have developed a knack for bleeding on the sidelines, just without the pounding headache from cracking his skull against a defensive lineman's helmet.


Trivia sponsored by Conner was, as it turned out, incredibly easy. I tried to discipline her for not putting her full effort into the task. She responded by saying, "Daddy!...you wrote that." Touche' my favorite first grader. TOUCHE'!! Things won't be so simple this week though, just a word of caution.........stay tuned.

Chris Nama elected not to take his lovely wife Christine to Krystal for their 10th Anniversary. It turned out to be the second best decision he made last week. He correctly determined that all four of the UGA retired jerseys belonged to running backs. Conner is tricky, just not tricky enough for our camel loving friend from Marist. Nama will receive a bonus this week for also listing the Legends' numbers, position and year retired. And then without missing a beat listed the jerseys Kiante Tripp has worn in his time at UGA. Incredible! Don't eat all of those cheese doodles in one sitting my friend.

Coming events: Friday's Blawg will contain an in depth analysis of the match up 'tween the hedges this weekend as the tick infested hounds stumble south for what has become an annual butt-kicking of our beloved Dawgs. Indeed...the last two years have been atrocious, but will this year's meeting end with a different result? You'll find the answer to that question and MORE, right here at Bernie's Dawg Blawg!!
Hunker'd Down by Bernie at 4:01 PM No comments: