While neighborhoods across the land are filled with the sounds of fall (crunching leaves) and All Hallow's Eve (BOO!), the sounds around the Georgia and Florida athletic offices have been muted. The memories of the end zone celebration are still vivid. But the words that may translate that recollection have been locked away, tight. The bad news is that the media has not been able to provide any fodder for the Bulldog Bulletin board. The good news is that the media has largely had to focus on the game itself.
While seeing Trinton Sturdivant shake, rattle and roll with 50+ teammates may be my most lasting memory of last year's GA/fla game, it was Knowshon's 188 yards and 3 TDs that

contributed the most to the win. And another performance like that may be necessary Saturday.
This year's game is HUGE. We've heard/read the experts this week trying to decide if this is the biggest GA/fla game of all. I say it is, undoubtedly. Sure there have been others with similar implications and national rankings, but this just seems bigger. Maybe it's the anxiousness of seeing how each team will play after last year's drama. Maybe it's the fact that the game that has been circled on the schedule for both teams is finally here. At the beginning of the season there were hopes on both sides that this might be a #1 vs #2 match up. Both teams lost at the end of September within hours of each other, but have taken care of business since then. Florida in grand style, the Dawgs in more workmanlike fashion.
Some things that scare me a little:
As I get a little closer to boarding Delta flight 1667 for Jacksonville, I realize there were a couple more things to clear out of the BDB closet. So real quick -

SO! Deep breath. Here we go ....... I think it is fairly obvious that our offense matches up better against their defense than our D against their O. Martinez has fared pretty well against Meyer's spread attack, but this year's gator is much faster and their emotionally sensitive QB is healthier this year and has a more diverse supporting cast. Mainly, the gators aren't relying on Tebow's legs (and heavy shoulder) as much to get those yards on the ground. Moore and Moody are the more traditional size RBs, but have been nicked up a bit. So Demps and Rainey have filled in admirably, despite their size. Meyer and OC Mullen clearly attempt to get these speedsters in space and let them go to town. It would be nice to see a red-jerseyed LB dart through and lower the BOO-YAH on these guys.
If it turns into a shoot-out, I still give us a shot at winning. But I think to ensure a win we have to be the more physical team, control the chains and the clock. Let Tebow rest up for their match up against against Vandy next week and give Knowshon the ball early and often. Meyer says that #24 makes our O-line look better than they are, well let's smack 'em in the mouth and open up some holes that even the gator coach's ego could fit through. Stafford should fare well through the air, especially if the running game sets the table.
PREDICTION TIME- Walsh has made some big kicks, it's time for the biggest of his career. Dawgs handle the gators with a workmanlike effort that makes Meyer write another book in the off-season complaining that Jacksonville is not a neutral site for him anymore and outlines his reasons for moving it to Utah. We keep our aspirations for a trip to the SEC Championship game (and our dreams of anything bigger) alive. Make sure to tip your bartender!
Dawgs 24

Swamptrash 21
This week's trivia brought to you by: The Corn Hole Outlet(.com), where non-athletes go to make their dreams bigger! Last year's Heisman winner is a one of a kind QB. And I'm sure 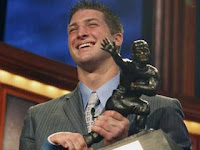 replicating his tendencies and talents in practice to help your defense prepare is a daunting task. Who "filled Tebow's shoes" on the scout team for the Dawgs this week in practice? An extra bean bag if you can add what the Dawg players were chanting after this player's skills were displayed.

If you're in St. Simons, save a booth at Gnat's and some fried dill pickles for me. And as always, be safe.

I'll Gamble on the Dawgs!

Turns out the "Tiger Bait" bit back. Hard! In my prediction piece Friday I underestimated the offense and overestimated the defense, I guess. Didn't like seeing all of the long plays go against us, especially the long run for a TD at the end. But it's hard to fault a D that puts 14 points (the difference in the game BTW) on the board. Gamble started the game off in grand style by showing he could read the eyes of Jarrett Lee easier than a recipe for crawfish etoufee. Pick 6, Touchdown Georgia! Up in the booth, Gary and Verne hadn't even taken their suit coats off yet .......... Gamble shows his sportsmanship as well by waiting another 3 hours before returning another pass for a TD. Two interceptions returned for touchdowns by a linebacker was good enough to tie Gamble for an NCAA record AND good enough to send the ragin' cajuns out of Death Valley to drown their sorrows in swamp juice a little earlier than planned. Oh! And Gamble also had 13 tackles. Not bad for an Ellerbe fill-in.

BDB beat reporter Scoop McGee caught up with Les "was more" Miles after the game. Scoop: "Coach Miles, your thoughts?" the Hat: "I WILL be the head coach at LSU, I have no interest in talking with anyone else." Scoop: "So I can consider this a Scoop McGee exclusive?" Miles: "I've got championships to play, and I'm excited about the opportunity of my DAMN strong football team." Scoop: "Even your secondary that 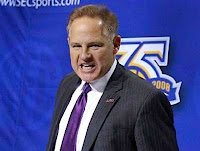 just got torched? Any truth that your D backs are not talented enough to handle being placed on an island, blitz after blitz?" Mad Hatter: "It was unfortunate that I had to address my team. I really have nothing more to say." Scoop: "Will Lee or Hatch start next week against Tulane?" the Hat: "I represent me in this issue. Please ask me after...I'm busy" Scoop: "Coach you seem distracted, aloof, or possibly just dazed. Haven't you used this speech before." Miles: "Thanks. Have a great Day."

Scoop then reports that the conference ended with Miles growling about giving up 2 TDs and nearly a hundred yards rushing to a linebacker. I suspect a difficult week ahead in Baton Rouge. 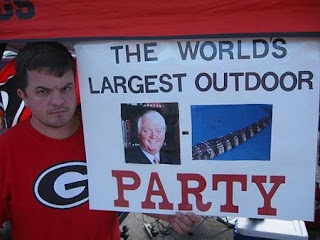 So, attentions turn to a game ....let's see.....let me find my notes......what game is next?.......OH! That's right. Florida! The annual cocktail party has been renamed by BDB as The Annual Convention for Successful UGA Students and Alums and another 50,000 or so Jean Short Wearin' Tebow Lovers. Catchy, but kinda long ....... Let's put that to our readers. Tell us what you would rename Dr. Adams Politically Correct, PoliteFest Social Event with a Football Game Teaser.


So many of you have asked, it's only fair that I share: yes, I will be able to participate in Halloween festivities with the kids AND take in the game. Thanks in part to Delta. However, the catch was to be able to do it without even one carry on bag. Thanks to Ann and Da Crew for taking my bag down to St. Simons on Thursday. Feel free to use my toothpaste. So that I can pull this off though - it's time to clean out the BDB closet of all extra "luggage". So hang on, this could get ugly!

Enjoy your Florida week Dawg fans. Make sure you save those Snicker bars Friday night for those cute UGA cheerleaders and decked out linebackers that come to your door. And go ahead and practice slamming the door on those little yellow jackets and gators. "This is the Department of Family and Children Services, intake." ......"Yes I'd like to report a case of child endangerment."

Hunker'd Down by Bernie at 9:43 PM No comments: