....we scored twice as many points against Florida than KenYucky did. Wahoo! 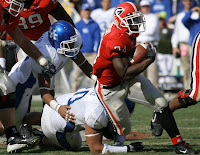 Moreno and Richt voted absentee in my poll this week. They both did their best to reassure me and other concerned fans that there is no cause behind my concern. I stand (er....sit) here today, unconvinced. #24 is our best threat on the ground and is one of our best assests in the passing game, receiving for one but mostly as a blocker. When he gains a sizable chunk of yards to get us within a breath of the end zone Saturday and then goes to the sideline to give the "rotation" a rep, that's unacceptable. King has proven he's a good backup. Samuel has proven he can avoid the allusive redshirt. Neither of those two options are going to put a defense into a matchup problem. Moreno draws attention....unless he's on the sideline. He needs to regain his breath in the huddle or a coach needs to get in his facemask and tell him he didn't do those mat drills for nuttin'.


So it's hogwash to me that he needs a breather. Using my previous example, Moreno should bounce back up after that long run and get back in the huddle so Bobo can call his number again. Then we are able to stuff it down the lizards throats and score a TD instead of settling for a missed FG. CLANK!!


One last point on this issue: last year Knowshon knew touches! He got over thirty-something in Jacksonville. This year....uhh...not so much. As usual, Chip Towers was one step ahead of me; he explores this issue and provides a more popular poll on ajc.com, here.


Too lazy to click today? Here's my favorite snippet:

On the game’s second series, Moreno had just gained 25 yards to get the Bulldogs down to the Florida 9 when he decided to leave the game. Freshman Caleb King came in and whiffed on a pass block, allowing Matthew Stafford to be sacked for a six-yard loss. Stafford lost five more yards on the next play and Georgia was forced to settle for a field goal try. It missed.

Scrap that! One more topic to rant about this Friday. I'll start by comin' clean. I've gone from a Martinez Hatemonger to one of his supporters at the beginning of this season. I was turned around by the stats that had his Ds among the tops in the land every year. "Well, move over Dawgs Discouraged with their Defense! I'm climbin' back on board." I'm tired of bending, breaking and downright gettin' gashed! We got to get back to manning up, bringing the heat and flat out knocking guys outta their boots.

I listen to a lot of 680thefan. And someone made the point on air this week of comparing BVG to Sweet Willie. VanGorder's intensity could make 17 year olds die to play for him. Now kids come to UGA cuz they wanna play for CMR. That's great.

But on D we need some intensity. And I just don't see it. Sure we have our moments when we go up against a Hawaii or Okie State of last year. But consistently it's just not there. I wanna see our D knock someone in the teeth, dictate the tempo and overall wreck havoc on the opposing linemen. Instead, we see a defense that reacts to what is going on and tries to contain the action within the first down markers and the end zones. Boo - Hiss!


Stay tuned with that one BDB readers. I'll agree that our preseason expectations were a bit lofty for our team's caliber. But with another loss (say to GA Tech for instance) things could get ugly with a capital UGH! CMR will always stand by ol' Willie, but it'll be interesting when he begins to feel some pressure into doing something in the off-season. By pressure I mean a big $$ booster, by public opinion or both. And by something I mean anything from firing/hiring to having Willie change his philosophy somewhat north of a tweak.


Speaking of GA Tech, BDB has at least two new ramblin' wreck readers. To make sure they have stayed on board after that North Avenue Trade School comment last week, I need to run a system test. Please stand by: Stop me if you've heard this one. A guy calls the Tech ticket office and someone picks up right away. "I need 4 together for this Saturday's game." the gentleman says. Ticket Office employee: "No problem sir, we have 4 together." Tech fan: "Great! When does the game start?" Employee: "Well....when would you like it to start?"

BA dump BUMP! If I know this reader like I think I do, he'll be redder than the visitors' section at Grant Field two days after Turkey Day every odd year.


But this week it's the Wildkitties. You know, Rich Brooks has done a great job at this school renowned for its basketball tradition. It took him a while to convince everyone that you could put 11 players on the field at one time, instead of the five they had been using. But once he did, they've not just beaten some teams, they've put some butts in seats.


Two more stops on this tour of manic-depression for the Dawgs. Jury's still out on whether we can survive this LONG trip with just one loss. KenYucky's a solid team and they know that the Dawgs can be beat. Many of these cats were around the last time we ventured into Lexington. In 2006 we thought the hardest part of the trip would be convincing the home team to use the oblong ball instead of the round one. Turns out the hardest part was putting more points on the board than the home team. OUCH!


Call me crazy (You CRAZY Bernie!!), but I'd be more worried about this game had we not just had our jock straps handed to us. We've heard this week about there still being things to play for this season. I think the people who still believe our SEC hopes are alive are not paying attention to the machine in the corner of the room that has the flat line............BEEEEEEEEP!


But there are still New Year's Day festivities on the table. Not a bad set of scraps either once those big boys (you know...Bama and Florida) finish eating. Capital, Cotton, Outback are all there for the taking if we can take care of the kittens, war tigers and the bees. Granted that if is a little bigger this week than last. But we're the better team, we have more talent, we're angry and we should be focused. I think we fight through the bluegrass and bring back a win.

News and Notes:
This week's trivia brought to you by PlayStation. Without that and NCAA Football, I don't know that I ever would've worked through my frustrations after last week's loss in Jacksonville. TAKE THAT URBAN! HOW DO YA LIKE THAT TIMEOUT? Some final stats from my own version of a Jacksonville beat down: Tebow 9-23 for 108 and 3 INTs; Knowshon 25 carries for 117yds plus 3 receptions for 92 yards, 3 total TDs.


Who had a dream about Matthew Stafford this summer that ended with #7 punching him in the nose and telling him, "You don't hit women."?

Have a great weekend everyone. Don't forget to stop by the online store and purchase your BDB slippers and robes to get ready for the holiday season and those frigid winter nights.

Bernie
Hunker'd Down by Bernie at 5:01 AM

A rich (and largely edited) sampling of a conversation overheard as we tucked our tails and ran for the exits. You want another? Ok.


"I don't know if I'll ever come back to Jacksonville again. EVER!"

Yeh, it was that bad, maybe worse. I think I was right about two things: 1) red pants would've been a bad decision and 2) Blair Walsh was a big factor. Of course, those missed field goals seemed to loom large as I visited the mens room at halftime. But turns out we were just on the first step of a spiraling, disastrous descent into a nightmare that still lingers today.

I feel a deepening need to get real honest. Might as well start with this: it's not a great feeling watching your team get outmanned and outplayed. It makes it much worse when you realize you're also getting outcoached. Then it gets really stark when you remember this is the second time this season this has happened. The only redeeming factor is that against the reptiles you can never get outclassed. I wasn't in the stadium at the time, but later heard that Urban called a couple timeouts to prolong the misery of the fans who had stayed to watch the 5th quarter. That's clASSy!


For those of you who came here for the rosy disposition, with wins over Kentucky and Auburn we can establish ourselves as the clear cut 3rd best team in the SEC. The rest of you probably already realize that we're at least a step closer to the 8th best team as we are the first. In the first half of the Bama game and the second half of the game Saturday we gave up 9 TDs. NINE!! Who in the world ever said Martinez coaches pretty well against this offense? Probably the same guy who said we'd win by a field goal. IDIOT!


In other news, Fulmer and UT have "mutually agreed" that it is not in the University's best interest for him to come back next year as head coach. In a completely unrelated story, Cracker Barrel announced more than 60 restaurant closings in the Knoxville area.


Other thoughts, some of which may actually be coherent:

Knowshon was a Knon-factor; his fault or Bobo's? Good question. I'll vote for both 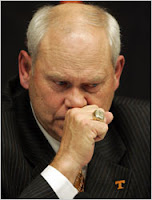 Another thing that concerns me is seeing Knowshon take himself out of the game. The first couple of times I dismissed it for the most part. But it seems to happen more and more. CMR commented on it a couple of weeks ago and said that it was #24's decision. I don't mind King getting some carries, but there's times you really want Moreno in the game and it seems like those times are the ones where he jogs to the sideline. What do you think? Have you noticed? Do you think it is a cause for concern or is this blawgger just overreacting?

For the second time this season it is time to dish out some suspensions. After the last loss BDB's suspensions helped propel the Dawgs to a 4 game win streak, including a solid victory over the bye week. This Saturday is stop 3 on a magical mystery tour. And the last time we were in Lexington we left limping. Let's hope these suspensions send a clear signal that here at BDB, we e 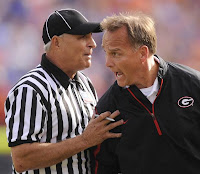 And lastly, congratulations to Cord Trammell and Chris Nama for answering the triv

ia question correctly. They somehow knew that Baccari Rambo simulated the play of Tebow during practice last week. They also knew that the team was touting him for Heisman by the end of the week. Turns out all of that was just to renew the junior gator's repeat bid as the trophy's candidate. But it was enough to earn these BDB readers a sack full of Krystals. Enjoy!

Email ThisBlogThis!Share to TwitterShare to FacebookShare to Pinterest
Dawg Tags: HillBillys have tooth, this rotgut moonshine is making me sick, too much tailgate
Newer Posts Older Posts Home
Subscribe to: Posts (Atom)