Can you imagine a funnier holiday movie than the one showing right now on the plains in Auburn? I've always considered A Christmas Story the greatest Christmas movie ever. Nothing gets me in the spirit like the scene with the Chinese waiters singing to the Parker family, "Deck the haws wit bows of horry, ra ra ra ra ra, ra ra ra ra."

Seriously, Tebow, McCoy or Bradford may walk away tomorrow with the hardware, but I challenge anyone to find a person more 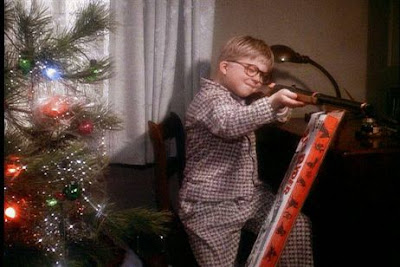 valuable to their program's decline than Mr. Jacobs. The SEC is supposed to be the most professional of the major conferences, and yet Auburn's AD is getting outplayed by Syracuse's Daryl Gross.

I mean even Mississippi State has found their man with a sense of organization, a modicum of professionalism. They named Dan Mullen, the Florida OC earlier this week. MSU fans will get really excited about that news next week when the newspaper gets printed and word begins to spread.

As far as the pleasantries in New York, Tim Tebow has a real shot at pulling an Archie. You have to figure Colt and Sam will split the mid-west, and the left coast is always a crap shoot when a trojan isn't in the mix. So if Tebow's smile and boyish charm can sweep the eastern seaboard........we might have our first repeater since '75. Wonder who Archie's voting for?

And if lil' Tim does repeat as Heisman winner then goes on to win his second MNC......he comes back to Gainesville next season to......trim his fingernails? Work on his video application to Dancing with the Stars? Provide trailer park circumcisions to jort wearing fans?

Speaking of underclassmen about to cash in their collegiate chips: Owens, Moreno, Stafford, and Allen.......Isn't Athens a nice place to live?

I was working on a piece to project next year's starters for the Dawgs, but it would be hard to outdo this piece from David Hale. I will add this however: in 2005 we had a starting QB who had been extremely patient (DJ) and a tailback by committee that got things done. They gave LSU and Nick Saban a beatdown of glorious proportions in the Georgia Dome to bring home the banner. So all's not lost should Stafford choose the Lions and Moreno starts singing, "J-E-T-S jetsjetsjets!!" Not to be greedy, but it would help if Owens and Asher didn't follow.

Friday's Feedbag
Have a great weekend BDB reader! I wish you all good parking spaces and recession style prices on what is to be a merry shopping weekend. Me....I'll be safe at home relentlessly punching buttons on my remote control. Yes, the honey-do list is shortened. I managed to fix the gas logs last weekend. With my cold-natured and circulatory challenged wife, that should buy me another week and a half. 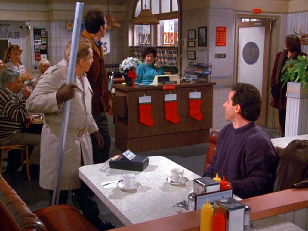 Trivia this week embraces the spirit of the season with the holiday for the rest of us. The reader with the best explanation of the origins of Festivus wins an aluminum pole that requires no decoration. In the words of Frank Costanza, "I find tinsel distracting."

.....but Tebow is a legend.
Turns out the only thing that kept Alabama from yet another SEC championship was a decision a teenager made some 3 years ago. The Crimson Tide stood toe to toe with the best team in the country and absorbed blow after blow with counter-punch after counter-punch. It was a game you could sense was being taped for replay as an instant classic. The drama was thick. The star players lined each sideline hoping to build upon already impressive resumes that would rest comfortably in the hands of most NFL GMs.
And as the third quarter came to a close, I felt pretty good about my Friday prediction. Tebow had touched the ball less often than a Gatorade cup since halftime and Coffee was well on his way to MVP type numbers.
But as a senior in high school Tim Tebow chose sunny Florida over Titletown Tuscaloosa without even really realizing that his decision would be the difference in the SEC title game three years later. Saturday night he welcome the game unto his shoulders and may have established himself as the first repeat Heisman winner since ol' Archie. (AP photo, John Bazemore) 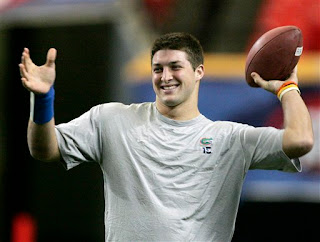 Make no mistake about it. Bama played well enough to win. Their game plan was sound. They set up the play-action early. And they avoided
getting down by too much early. Even after Florida scored the first touchdown in seemingly effortless fashion, Bama didn't budge. They steadied themselves like any tremendous pachyderm would. Then took two giNORMous steps towards the opposite end zone and balanced the scoreboard in less than a minute.
In the end, Tebow was the quite certainly the difference. As good as John Parker Wilson is and as good as the Crimson Tide has been this season, Tim Tebow is just too good and the Florida Gators too fast, well coached and determined to lose this game.
And now the national sports media turns its attention to the BCS big 'un. The finale in Miami. The game for the Mythical Nat'l Championship.
All season the pundits have ruled the SEC inferior to the Big XII. The midwest major conference just had too many star QBs and too many prolific offenses. Well, we're gonna see aren't we. I still subscribe to the theory that offense sells seats and defense wins championships.
There's no question that the two teams from Oklahoma and the two from Texas (no....not Baylor) are well oiled point scoring machine. And I understand the argument that the SEC defensive numbers may be deceiving given the lack of talented QBs in the conference this season. But historically the SEC is faster and more dominating on defense than their counterparts in other conferences. Florida's defense was gashed Saturday night, but is far improved from last season's trial by fire. They'll go against Oklahoma's high powered offense. Last team with the ball may hoist the trophy.
Shout-outs
Monday's leftovers
This weekend's Mall Santa Special: two tickets to next year's Bernie's Dawg Blawg OldCrow and HamDog Bowl. Coming to a back yard near you.
And the trivia winner from Friday is.........Bernie! It took him the entire season to stump Nama, Cord, Jenn, Allen and others. But he did it. Turns out he should have abandoned the medium of choice (internet) and used the BDB preferred medium (sports talk radio) earlier. The answer is a newcomer to 680theFan, but an old voice on Atlanta radio waves, Chuck Oliver. When news broke of Tuberville's exit in Auburn, some callers and co-hosts kidded Oliver about Petrino being their new guy. Oliver played nice until enough was enough. Then he let listeners know exactly how he felt about the Falcons coaching seat warmer. And that was your Sports Talk Radio Quote of the Week.
BDB rules specifically frown upon an employee taking any prize as a result of a contest or otherwise. When contacted at home late Sunday evening and informed of the "lawyereze", Bernie replied, "Sue me!"
Here's to you Bernie. Everyone else - steer clear of mall Santas that smell of whisky, have fake beards that are askew and have torn ponchos.
Bernie
PS - if someone with a key happens near the suspension desk, please let Miranda out. I think he has a date for Saturday night. Hate for him to miss it.
Hunker'd Down by Bernie at 10:46 AM No comments: