Parking fines, Gravy and too much Nog!

Coaching News...
All is pretty quiet around the BDB offices this week. The head man has given most of the staff some well deserved time off. The only sounds are the taps of the keyboard and the Gurgh! of the water cooler every now and then. Oh! Someone left cookies out...cool!
I had hoped we'd have some news regarding Coach Searels by now. But evidently CMR and Damon Evans are still putting together a package to try and keep the O line coach in Athens. That or Coach Searels is pondering the two offers. But just the fact that we haven't read that he is moving to Opelika is good news for the Dawgs. If CMR could escape this off season with both line coaches still in the fold it would be his best recruiting effort to date.
And says a lot about the state of the Bulldog Nation.
Weighing in Auburn's favor:
Weighing in Georgia's favor:
Surely we'll have an answer by the time the team reports to Orlando Friday...
Testing...onetwothree...testing
"Is this thing on?"
BDB posed the question, who is your favorite all-time Dawg? If it weren't for Adam, all we would have heard was (...chirp...chirp) crickets. We even put a poll up with a smattering of 'tween the
hedges All-Stars. Ten votes...and about five of those are Bernie's (4 for Pollack, 1 for Herschel).
Come on folks, if BDB is gonna shell out the benjamins for these sexy gadgets, the least you could do is use them.
And for entering the discussion, Adam and Demiko both get their tabs at Steve's picked up at the field trip this winter. The rest of you dolts are on your own. 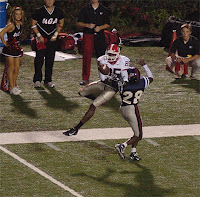 My favorite Demiko play was the catch against OleMiss in Oxford. Great game, great place to watch the Dawgs play, after tailgating in the Grove. Southern hospitality at its finest.
Don't Park So Close to Me
I had planned to steer clear of any more text devoted to Dawgs pondering NFL futures. But I was afraid my readers may have missed this tidbit by DH of Bulldogs Blog and Macon.com fame. Georgia Athletics have a good number of beat writers bringing the red and black news to our hearts and minds. Hale is at the top - IMHO.
This story may have fallen in his lap, but I found it interesting. Will the parking police tow away our hopes of having Stafford and Moreno back next year?
Trivia
Nama once again hopped on the Trivia Train. By now his closet is stuffed with useless prizes from BDB trivia. But since he knew Clark Griswold's response to son Rusty's question, "It's not going in the yard, Russ. It's going in the living room", he takes home a beautiful new dual bag vacuum. I suspect Christine's heart will skip a beat!
Shout-outs
Since it's Christmas Eve, BDB has added a special section to this edition. As fans, we tend to be greedy at times, whiny at others, unrealistic, pithy, and really whiny at other times. That being said, given our hugely unsuccessful (insert sarcastic grin) 9-3 season, BDB has put our concerns, thanksgivings, well-wishes all together into one list.
Red and Black Christmas Wishes
Feel free to add others as necessary. Merry Christmas Dawg fans!
Bernie

Hunker'd Down by Bernie at 2:12 PM No comments: