Spartan Mothers and Their High Expectations 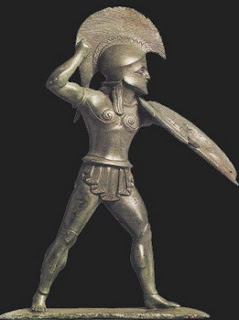 As Greek young men prepared for their first battle, their nurturing mommies were rumored to have given them an ultimatum that challenged their manhood and undoubtedly made the little hairs stand up against their tunics.

The ancient muthas referred to the soldier's shield. To return with it equated to a victorious warrior; to return on it meant they had perished, but in honor.

....and we would complain when our mothers would insist we finish our grits.

But to return without their shield meant they had performed what would later become known as "pulling a Petrino"; they had seen the field of battle and decided to drop their weapons and scurry home...to mommy. Or in Petrino's case, the warm, loving arms of a late night WooPigSooie!! 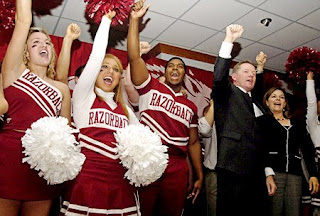 Well, the Dawgs have landed in Orlando where they will do battle with the Spartans of Michigan State, all against the backdrop of Mickey, Minnie and...doh, garsh! Goofy.

For the Dawgs, Coach Searels is still in the fold, which last week's BDB poll overwhelmingly predicted (if six of seven votes can be associated with overwhelmingly). Stafford and Moreno are still in red and black...for now. No academic leave 'em behinds and the number of green jerseys in practice is....dwindling.

And did we mention that the bowl preparations have been...spirited? A fracas or two (you know...a donnybrook) during scrimmages is a clear sign that the boys are taking this game seriously.

For their part, Michigan State brings a solid running back who ran for more than a mile against Florida Atlantic. Against Penn State...well, barely to the mailbox.

Shield or no shield, the bottom line for this Spartan offense is - as goes Ringer, so goes the Spartans.

Coach Martinez will undoubtedly use his defense to force Spartan QB Hoyer to make plays. It would be a great time for an INT in the secondary (hey! I asked for it for Christmas and it wasn't under the tree...maybe Santa left it in Orlando) Meanwhile Coach Dantonio will hope to keep Stafford and Moreno on the sideline weighing professional options.

But, in the words of the esteemed and slightly senile Lee Corso, not so fast my friend! Spartans can't slow the Dawgs' roll. Stafford, Green, Moreno, MoMass...heck! Maybe even Dobbs again...they all score.

The good news for Michigan State...they return to East Lansing...but without their shields. Let me know if you want one as a souvenir.

More specific (accurate...???) predictions:
Trivia this week brought to you by Hannah Montana. Santa invested a lot in her this Christmas. It's her turn to give back.

How does Spartan tight end Charlie Gantt plan on getting the Dawgs to "back up a little bit"?

Winner gets a video clip of my daughter playing guitar for Hannah's band. Pace yourselves on New Year's Eve Dawg fans. Hate for anyone to miss the opening kick...or have to explain to their mother how they lost their shield.