For college football fans, the ultimate experience for each of us is a national championship for our team. To see players wearing the colors you cheer for every Saturday hold up ADT's crystallized football is the reason we get up early each Saturday to head to the tailgate. It is the reason we sit in a stadium filled with thousands of others like us, acting like raving lunatics.
Every victory over an arch rival gets us excited for the fruits to our team's labor. Each win puts us a little closer to that moment our coach brushes away the confetti from his hair and, wearing a shirt very similar to the one we are wearing (minus the gatorade stain), addresses the national audience.
And each loss makes us rant about having to wait another year.

Wednesday, Matthew Stafford and Knowshon Moreno made official what Georgia fans had long suspected: they will continue their careers professionally. Stafford's last pass between the hedges has been thrown, Knowshon's last leap leapt from its hallowed turf.
The junior quarterback and redshirt sophomore leave behind many wins and few losses, but Georgia fans are undoubtedly conflicted between the highlights of two incredible athletes and the one win they were expecting to relish when the two players stepped on campus three years ago.

Stafford's arm was well discussed before he even arrived in Athens. Most Dawg signees are much ballyhooed and evaluated at great lengths on message boards and over the company water coolers.
But Stafford was different. His size, talent and big time arm have had him labeled as a future NFL #1 draft choice since before he graduated high school. Georgia fans couldn't wait until that talent translated into victories. Banners. Championships. Even confetti.
And for the victories, they didn't have to wait long.
Stafford was never really in danger of a redshirt. He started eight games as a freshman and played in all 13. By the time he helped engineer a dramatic comeback against Virgina Tech in the 2006 Chick-Fil-A Bowl, fans were sure they would soon be able to hold #7's name up there with the likes of Buck Belue, David Greene and DJ Shockley.
All SEC Champions. All beloved in the hearts that bleed red and black.
Meanwhile Moreno was finishing his redshirt season and rumors were starting to circulate about his performances on the practice field. A scout team running back did what? The seniors are talking about who? Isn't he the kid that signed from up north somewhere?
But most fans were focused on the upcoming senior season for Thomas Brown and Kregg Lumpkin, not to mention the recruitment of Caleb King. Surely this kid from Jersey would just push for some playing time; maybe hold the position warm until King developed into the next star tailback from Georgia.
So while Moreno was making his Georgia coaches second guess the decision to redshirt him, fans were preparing for the next Worley, Hampton, Hearst, even Walker. But by the end of the 2007 season opener against Oklahoma State, fans would have the same perspective, but for a different player.
From that game on there was an audible gasp in Sanford Stadium every time he touched the ball. Tickets were scalped and seats were sat in just to catch a glimpse at what he might do next.

Moreno only started six games as a redshirt freshman, but he played in all 13. He gained 1,334 yards. Scored 14 touchdowns. He broke defenders' ankles. He hustled, juked and jived. He played as if each play were a gift to be made the most of and never to be taken for granted.
And in so doing, he endeared himself into the hearts of every Dawg fan.
In August of 2008, as #7 and #24 jerseys were flying off the racks around Athens and the Georgia Bulldogs were being speculated as the best team in the nation, injuries were quickly and indirectly becoming an issue for Stafford, Moreno and the team as a whole.
Left tackle Trinton Sturdivant went down during two-a-days with a bad knee. Defensive tackle Jeff Owens in the season's first few minutes. The list grew each day it seemed.
In Sturdivant, suddenly Stafford's blindside insurance policy and Moreno's seal blocker was gone for the season. Although both stars enjoyed success individually during the season, the preseason expectations were grossly unfulfilled. Losses to Alabama and Florida had forced Georgia out of the driver's seat in the SEC bus.
Worse, a loss to in state rival Georgia Tech had left fans bitter and wanting more. Much more. The reality of a decision their star players would soon make was setting in and they felt the window of opportunity for crowns and glory was closing, if not closed.
Could Stafford leave with a losing record against hated Florida? Would Knowshon take his energy, enthusiasm and highlights to some NFL team's field? Where was the crystal football, the SEC Championship appearances, ...the confetti?
On the other hand, could Stafford pass on a possible top pick in the NFL? Could Moreno use another season in the short "lifetime" of a running back as a collegiate player? Could they pass up millions of dollars...to go to classes?
At the end of the Capital One Bowl we gathered close to hear Stafford accept the bowl's MVP trophy. With bated breath we listened intently, hoping that with the swell of emotions at the end of the season the young man would tell his fans he wasn't done at Georgia. We all chanted "One more year!" as if our desires could prompt a momentary loss of reason. He took the microphone, but was working off of a different playbook.
We wanted him to audible, but he stuck to the play.
On the first of this month we had a chance to watch the first tailback to gain over 1,000 yards in consecutive seasons since Herschel Walker play another game in silver britches. With each yard Moreno gained we inched closer to the edge of our seat. With each signature sprint back to the huddle we smiled a little wider, as if to hide the anxiety at what we might be witnessing.
Six days later the two stars gave us their word. They made it official. Their time on campus was over. They were prepared to take the next step.
Did they, along with their fans regret the opportunites missed? Absolutely. Was it a difficult decision given careful thought? Without question, yes.
But when you have an opportunity to play a game you love and get paid handsomely for it, the choice is made easier. As nice as it would be to finish what they started three years ago, come back and lead their team to more victories, provide fans with more statistics to pore over and give YouTube junkies more sick moves to watch countlessly; the lure of another challenge awaits.
Matthew Stafford and Knowshon Moreno leave Butts-Mehre Heritage Hall with no more SEC Trophies than there were in 2006. But while many fans will say that this tarnishes their exemplary career and legacy, they cannot be judged as any less of a player.
They are Dawgs.
Stafford engineered a last minute comeback as a freshman, against the engineers of Georgia Tech. Moreno's first touchdown in Jacksonville sparked a celebration both in the stands and on the field. Stafford used just one throw in overtime to beat Bama in Tuscaloosa. Moreno defied gravity once for over five yards in the desert heat of Arizona, finally returning to Earth for a Georgia touchdown. Stafford calmly stood backed against his own end zone and fired a bullet to Massaquoi against the Gators. Moreno once returned a phone call to LSU's student body from
their team's endzone.
Yes, they ARE Dawgs!
How fitting that the Georgia quarterback's last pass as a Dawg was a beautiful spiral that was placed perfectly into the hands of his tailback. And how fitting that Georgia's tailback's last reception as a Dawg was a spectacular catch only outdone by the footwork that made it into a touchdown.
No BCS trophy. No SEC Championship ring to signify the event. No confetti falling from the Orlando sky. Just a signature moment for two talented players.
Two Dawgs their fans will always remember.
Bernie 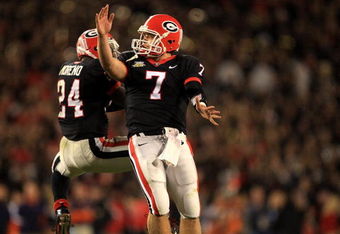 That was beautiful, and deserving of some kind of ballyhoo all it's own. It was sad to read. I'm not gonna lie to ya, I really was kinda bitter about them leaving. Still am. I am reminded of a quote I heard once on a TV show (but I think they stole it from Shakespeare or Frost or Kermit, one of those loquacious sages), "And lo returned the masses who had all the aspects of Dawgs (my spelling) but loyalty."

Kermit....you crack me up. Great quote.

Yes, next season would've been great with them. But I don't blame a guy for taking an opportunity to make himself and his loved ones more comfortable. I think it will be seen as a good day for Georgia when all is said and done.