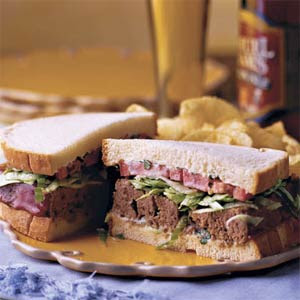 There's nothing like discovering a four leaf clover the day before St. Patrick's Day. A warm plate of meatloaf should fall well short of that...
March Madness is upon us. The brackets are completed and the SEC evidently has two left feet. Your humble blawgger can relate. But the good news is while the rest of the collegiate world is focused on balls bouncing on hardcourts, we can focus on spring ball on the gridiron.
After all, what says spring has sprung better than skeleton passes and dummy drills. Yeh baby!
Before it burns, let's get right to the main dish. 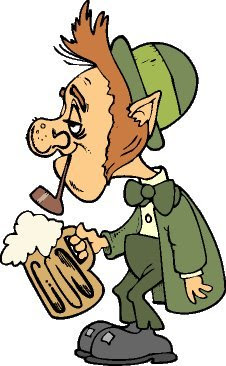 Lastly, never go up against a Bernie when beer is on the line....
Yes, I successfully defended my tasting title at Supper Club. They changed the game from wine to beer, but the results were the same. So if you're keeping score at home, that's a $5 Barefoot Merlot for the runaway win in January and a Samuel Smith's Pure Brewed Lager in the 22oz bomber for a win that required a recount. I personally didn't know Al Gore was a beer drinker...
Shout-outs to Erin and Chris Miranda for hosting the BeerFest. Although Ainsley evidently took exception to some of the decorative items around your house....
Speaking of beer, Spring Break is over...spring practice starts Tuesday, something like 25 days until G-Day, and 173 until Stillwater. Wow! With enough imports from Tadcaster North Yorkshire, we may actually make it!
Bernie
Hunker'd Down by Bernie at 9:47 AM

Leprechauns do not exist. It is just short irish people were standing at the end of a rainbow and that created the myth.

Thanks for clarifying Tadcaster man. I gather you're from "across the pond". My wife and I spent a long layover in London this summer on the way to Italy. We plan to get back over someday soon for a longer stay and Tadcaster will definitely be on the list of places to see.