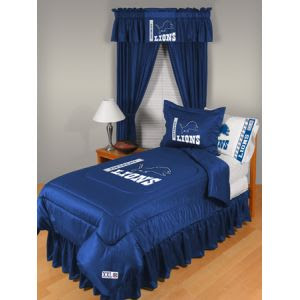 A smattering of ingredients are blending together that may indeed make Matthew Stafford the numero uno on NFL Draft Day. But the end product may be as tasty as a three week old egg salad sandwich...
The facts are these:
Whether Stafford is the best QB in the draft has been debated, but I think it's clear he has talent that others will never possess. I agree with RidgeDawg @ GeorgiaBulldog.com, no way Stafford falls below Sanchez. However, whether he is worth the first pick is entirely debatable in my mind. The history of early entry QBs is far south of successful. And the Lions could certainly profit from trading the pick in hopes of adding more than one starter to the lineup from this draft.
Stafford's Future Office 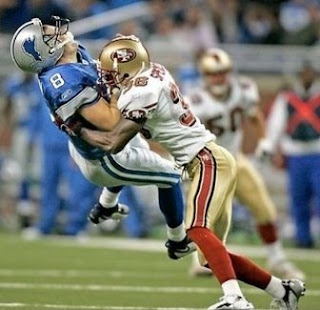 But there's no one willing to trade up. There's not a HOT prospect in this year's crop that begs the temptation. Kansas City traded for a QB last week. St. Louis and San Fran could be in the QB market, but are probably content waiting their turn.
If you're Detroit, do you spend the pick on a QB with Stafford's tremendous ability or on another area of need that may have less of an impact?
So you can see the sea swelling and the clouds forming. Roger Goodell approaches the podium and a young man from outside of Dallas, Texas sees his dream come true - the first pick of the NFL draft.
Here's your light blue jersey son. We'll get someone to block for you next season.
One sidenote: if you haven't travelled over to see the Senator's historical analysis of Stafford versus recent Dawg signal callers, grab hold that mouse and get to clicking. It's one helluva read.
Hunker'd Down by Bernie at 2:30 PM

Oh God, that might be the worst looking bedroom set I've ever seen (perhaps only second to the gay looking Miami logo with the smiling dolphin with a football helmet).

It's such a tough call whether I want Matt to have the honor of being picked first (which looks good for UGA...I guess?) or perhaps have a decent future with a team he can actually do something with (I had high hopes for the Kansas City Chefs...wait, who are the Chefs?)

btw the Honda came from Ed Voyles on Cobb Pkwy in Marietta. There is a sales guy there named Bob Newsome who came outright and showed me the invoice, offered $1,500 buyers incentive + the $500 dealer holdback (money they receive after moving a product from Honda). He also doesn't come across as a vulture which says a lot about him as a car salesman.