It's Easy to Get Yourself in Quite a Pickle... 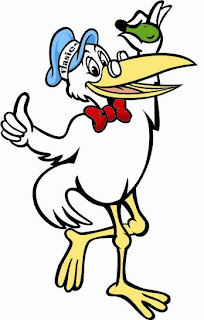 ...when it's your surname.
Before I go spoutin' off big time phrases like civil disobedience and wrong-headed, I tend to use resources like the dictionary or thesaurus on my desk. If those don't work I just ask Jenn.
Honey, what's a synogomy for bark? I think you mean synonym (sweetheart). Try woof!
You may remember last week when the AJCs Carvellurged CMR to attend signee Chris Burnette's graduation speech. One development this week is that Burnette fell just short of being named his class' valedictorian. Another development was that an NCAA jackhole decided to open his orifice.
David Pickle is the NCAA's managing director of publishing. Which is to say he's about as important in NCAA land as the guy who bagged my groceries today is to my supermarket. Mr. Vlasic didn't like a writer urging a head coach to violate NCAA rules. To be fair though, it's hard to realize the governing body you work for has rules as dumb as doughnuts when your last name is Pickle.
And seriously...civil disobedience? Wrong-headed?
Paging Mr. Pickle. We need all baggers to the front. All baggers to the front please!
Friday Feedbag
Lastly and most importantly, congrats to Burnette for the classroom achievements. Fess up Reader, the closest you an I came to Valedictorian was the near fender bender in the parking lot before the ceremony.
And I'm glad Richt has applied for the waiver. I mean why forego breathing through your nose just because you're surrounded by a bunch of knuckle-dragging compliance freaks? While folks at the NCAA like Pickle are busy wiping the drool from their chins, Richt can be making a young man's special day even more...specialer.
Is that right honey? Specialer?
Bernie
Hunker'd Down by Bernie at 1:00 AM

Could you please introduce me to Mr. Pickle. Then we can marry, and I will hypenate my last name.