...and others that made the cut.
Weekends bring opportunities to do yard work, grill out, reacquaint yourself with the sofa and watch some pig-tails take another step towards Mia Hamm status. But it's also a time to tackle some real doosies; questions that you don't have time for during the hustle and bustle of weekday madness, present themselves in all their ambiguity, perplexity and malevolence. 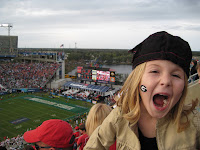 This weekend, Conner stood unafraid:
Daddy, why do gators eat boogers?
Well Sweetheart, do you have the full afternoon?
I entered into a diatribe full of sinister deeds and malignant mischievousness, but luckily her 7 year old mind took her downstairs to iCarly before I had to lay down the real disturbing facts. But as I told her, it's good to always remind ourselves of how lucky we are not to be simple-minded cretins.
Daddy, what's a cretin?
Honey, ask your teacher.
Mix together well, cook for one hour at 400, then let sit for five full minutes:
Big shout-out to Mr. California HamDog himself for scoring Bernie a dinner ticket to next month's meet and greet with Mark Richt. In case you're new to this area, he's Georgia's football coach (Richt that is, not HamDog) and is pretty much the state's rock star.

I've submitted my questions to Cord for approval and only one was scratched. So I plan to either lead with Would you and Kathryn like to join our supper club? or Can we simulate the endzone celebration dance together after dessert?
I figure I'd save the one about how awesome it is for him to talk to fans like me for the ride to Stillwater. Shotgun!
Always working the angles for ya reader. Please use a paper plate today. The Bernie family dishwasher is on the fritz and the new one doesn't get delivered 'til Tuesday.
My dishpan hands are soaking in it.
Bernie
Hunker'd Down by Bernie at 7:00 AM

Yeh, that's not the kind that look good on the scorecard.