WhaddaYa Have on Draft? Part II 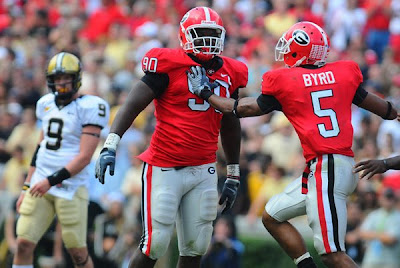 Stafford is getting lots of ESPN face time this week; I watched him sit down with Erin Andrews and play coy. A few minutes later it was confirmed that he had become richer than cheesecake. And while I'm glad he didn't pull a Brady and slideslideslide...I'm much more intrigued by some other Dawgs looking for a pro bone.
Earlier this week we looked at CJ Byrd heading into the draft. Today look is at Corvey Irvin who helped hold a depleted D-line together last season, starting 11 of 13 games. Irvin is ready to "seize the moment and embrace everything that comes (his) way". Some of the teams who've expressed interest in Irvin: Bills, Lions, Cowboys, Cardinals and Panthers. Hale had a sit-down with the big guy.
When his name is called, Irvin will be in Augusta with family and friends, not too far from his former teammate Byrd. Irvin's lack of significant D-1 playing time may hurt him some, but this great leader will be a welcome addition to an NFL team, as high as third, but likely no later than the 6th or 7th round.
Hunker'd Down by Bernie at 1:03 AM