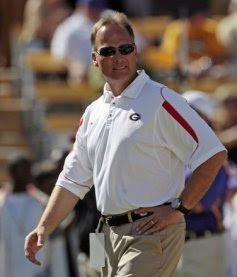 Last week, the Senator posed the question of What is CMRs end game? Having been troubled lately with all the turn tail and run from J'ville nonsense and bring on the cupcakes talk, the read did me a lot of good.

I figure by the time he reaches downtown ATL with the Bulldog Club tours, the focus will be squarely on T. Boone Pickens' little toy. Where it should be.
Whaddya think? Let's open the phone lines. Mike from Valdosta...you're on the BDB PowerHour, is CMR baitin' the hook or is he three steps ahead of Bernie...as usual?
Hunker'd Down by Bernie at 6:13 PM

LOL, he is just being the sly man that he is. It is all about bargaining power. The more he talks the higher the bid from the Gator bowl people will be.

As for the lil' oilers, I believe they will understand what tilting at windmills (a la the picken's plan) means by halftime.

And Bernie, if he is only three steps ahead of you, then you are certainly a Damn Fine Dawg!

BTW, was going to go with the dry-well pun, but I decided to be retro-contemporary.

One more thing Bernard. Rex Robinson reponded to a recent post of mine on Hale's blog and has redubbed my Mike in Winnersville. Winnersville is what they called my little hamlet prior to ESPN annointing us Titletown. Anyway, I know Rex is from Marietta, but do you think it would be rude of me to call him the Cold Kentucky Killer?

I guess we're agreed that Richt is much more savvy than whiney, as some enemy pundits have penned. (I liked the windmill tilting much better...fwiw.)

Rex is a wise man...and knows that any town that contains your mailbox is a winner. I like your moniker for the iced-blooded wildcat slayer. I give it my full endorsement...which in Rex's world is worth about a half a bean hill. However, he does owe me a favor since he made me do a little "work" while on vacation. I can weigh in if needed...

And thanks for the tip on the gators last week. This was the first trip to HHI in years that hasn't had at least one gator encounter.

Coach Richt knows what he's doing. He is trying to keep all media focus off our game and keep it on our "drama".

To play conspiracy theorist, I think he did the same thing with G-Day (which was the most boring thing I've ever watched). Think about it, you have your playbook displayed on nationwide television...are you going to use your offensive firepower to let rival teams know what to look for? Supporting evidence? When was the last time our offense called that many trick plays in a game?

Long story short, don't look for the flea-flicker-lateral-back-to-Joe-Cox play in the regular season.

We're hiding something, I just hope it's something worth hiding...otherwise we might be in trouble.