Good morning from beautiful Nags Head, NC. The weather's here...wish you were beautiful. 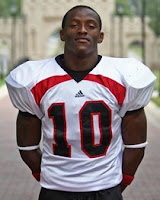 Big commitment over the weekend in Jakar "Hitman" Hamilton. Hamilton is a JUCO All-American from Georgia Military College and chose the Dawgs over the Sabanites, as expected. He should graduate in December and enroll at UGA in January. That could give him a jump start on another couple safeties expected to sign with CMR, Deas out of Florida and GAs own Alec Ogletree.
With the departure of Knox this off-season, the depth at safety has evidently rebounded well.
Here are some links for those who still need to read up on the Dawg's 14th commit:
After a slow start, it's looking like CMR and staff are gathering some steam towards NSD '10. I can almost smell the doughnuts!
Mix em up and CHILL!!
Many thanks to cousin Wes and his soon to be bride Allison for picking the beach as their location to wed this coming Saturday. It's gonna make throwing dried rice in your eyes so much more fantastic! 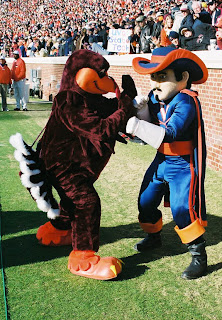 But this week's biggest shout-out goes to the inventor of earphones for car DVD players. I used to be mistaken that car DVD players were the jackest of all crap. How my parents put up with us for hours in the car with nothing else to do but touch each other provokingly, I'll never effin' know.
Then some Japanese teenager constructs a magic box that plugs into your car's cigarette lighter and boom!, instant civility....with never ending Disney audio to drown out your KISS and Scorpions.
But now the Bernie progeny is splendidly silent for almost 65% of the time we're locked in together. All I have to do is make sure all of Jenn's Motley Crue is loaded and iPod ready. Otherwise the little lady gets really cranky.
So I'll be spending the week with a bunch of Wahoos from Charlottesville, as well as a handful of Hokies from Blacksburg. Despite their ACC affiliations, they're hardly the wine and cheese type; good people that I've spent the last 12+ years indoctrinating into the SEC culture.
They live for the Chick-Fil-A Bowl...we live to aim higher. Yin...yang. Ebb...Flow. Donnan...Welsh. We share bourbon, bloody marys and plenty of laughs. I guess somewhere in there we'll mix in a wedding this time.
When it comes to these in-laws, there's always safety in their numbers. Sure am glad their JP came south for her edumacation. And glad you bellied up to the bar for this Margarita Monday Reader. Enjoy your week. You can keep the little umbrella.
Bernie
Hunker'd Down by Bernie at 1:00 AM

If it were not for the ultimate disappointment placed upon Hines and my Dawg's by those liberal as Wahoos, I would say this was your best post ever. Rotunda be damned, Thomas Jefferson would have been a Dawg! And what the hell is a wahoo?

I got a week with them...try and get an answer for ya. As for that PEACH bowl...believe me, they realize how lucky they were. The wife and I were dating at the time and I refused to meet up with the future in-laws after that frickin' kickoff return.

They now understand why. It's just how we roll. College football IS our livelihood.

If you were any kind of man you'd demand your kids listen to Scorpions and like it!

Thanks for the reality check Mack. Sometimes here in Estrogenville I forget where I've put my emergency vials of man juice.

Mackie knows not of which he speaks on this one, trust me...as the father of three girls (all of them either in their teen years or rapidly approaching them), I'm right there with ya, Bernie. There are battles worth fighting, and portable DVD players and iPods just made surrender so much easier.

How did we (your parents)cope on long trips with you, Jeff, the girls and Meme in those ole pre-tech days? In a word - "Ho! Ho!s" - every several hours!! (some may need an explanation for that) Love ya, Mom

Well...since Mom left it to me to explain, lemme open another can of creative license....

"Ho-Hos" were not roadside prostitutes, but fake Santas my parents hired to continually guilt us into sitting quietly. That way Dad could crank up his Rita Coolidge and drive in peace.

Thanks for the comment Mom. Your love is lifting he higher and higher.

Mike - you asked me to find out about the moniker "Wahoo". Here's what I got: it comes from sometime in the late 1800s when another school referred to the UVA baseball team as the fish wahoo. I guess it stuck. Although sometimes it is shortened to "Hoos".

Not to be confused with a sorority on the West Opelika campus...