Back on Top - a Look at the East 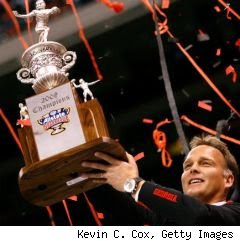 Now that we know who'll be playing the Dawgs in the Dome this December, let's take a looksee at who's gnaw'd bones will be scattered around the junkyard.
KenYucky - Keep in mind that the off-season extends into November for our friends up in horse country. Football is just an appetizer to whatever shenanigans new round ball coach John Calipari has in store. However, the Big Blue Faithful are purring over a couple of JUCOs that join Coach Brooks' squad in Lexington. I don't care if they're both blackbelts, it's Shreveport or bust. My money's on bust.
Oh Vandy - ...well you came and you gave without taking...Our friends in Nashville have a quarterback named, but are still about as consequential to the SEC landscape as Barry Manilow was to Rock and Roll. On their behalf, it's hard to be a plaYah when you share the locker room with the Fine Arts department. They'll steal their usual game from somebody...but Bobby Johnson isn't enough of a wild and crazy guy to make too much of a splash. 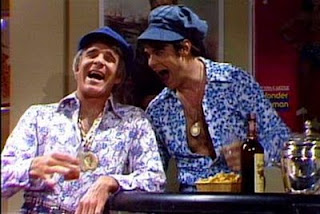 Rocky Flops - It seems like years ago that Philmer stepped down and was paraded (out) and serenaded (angrily). Hard to believe Kiffykins is heading into his first SEC start. He may not be nervous, but his tail's gonna be sore well before our beloved Dawgs' visit. The voWels may bowl, but it doesn't look like enough pins to score three digits.
Free Range, but Little Gamey - Turns out that the Dawgs aren't the only SEC team brushing up on chemistry this off-season. Sure, we can all agree that chicken tastes good, but the processed poultry coming from the armpit of the south historically, is gamey and not easy to digest. Another year, another plate of insignificant, plain ol' chicken.
Gradulations are in Order - It's hard to believe an incoherent congresswoman (oxymoronic, no?) could bring so much accountability to college football's favorite program. For years, gayturds have been running amuck, stealing dead people's credit and other tomfoolery only to be slapped on the hand. But now that gradulations are in order, Slurbie is cracking the whip. All Dustin Doe did was plead guilty to two misdemeanors and now he has to sit against Charleston Southern. OUCH!!
Back on the field, these reptiles will cruise into October still basking in the glow of all things Bristol. Should they survive a trip to Baton Rouge and Starkville, the loss to the Dawgs will be even mo better. Tebow may start in Jacksonville, but he won't finish.
Yeh...I said it! Enjoy sunny Orlando punks. Mess wit' us again and Orson'll break more than your crystal. 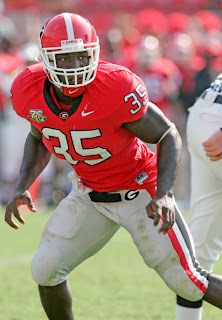 Kings of the Junkyard - One Team, One Goal. This team will be special. There may be a loss in there somewhere, but I'll be damned if I can point my finger at it. Yeh, it's a far cry from the days when you could highlight the Saturdays on the skedYule when you knew an extra fifth was gonna be needed. Now we just restock the depth chart and lace em up.
I truly believe this defense will rise to the occasion each and every Saturday. I've come a long way since Asher said he was leaving. Of the three to choose the draft, I thought his departure would hurt the most. While that still may be true, I have faith.
Join me. Maybe it's the anxiousness of College Football Season's eve talking. Maybe I'm just a big ol' Homer. But it's gonna be special.
GATA! Go Dawgs!
Hunker'd Down by Bernie at 5:00 AM