Getting Defensive - Aberrations Becoming the Trend

I've cut him some slack. It's time to tear him a new one.
21 17 7 10 41 14 14 38 49 38 13 45 24 37 41
Those are the opponents point totals from last season + three games into 2009 (h/t Mac). Dawg fans love to bark back to the days of Erk Russell and even Brian VanGorder. Only the lowest of those numbers listed above would have been commonplace under those regimes.
Today is a new era in Dawg defense.
Before I go any further, a word from the rational side of my brain: In Coach Mark Richt I trust. There is absolutely NO other coach in the business of tackle football I'd rather have at the helm of the Georgia football program. He is class personified. He has made winning in Athens an expectation once again.
Back on point...our defense on the other hand, is an embarrassment. 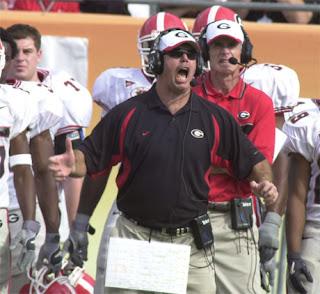 We're undisciplined. We're unable to dominate in the trenches. We can't cover a sleeping baby. Our bend breaks regularly. We give up yards. We give up points. We disgrace our forbears.
Those bolded numbers up there would've been aberrations in the old days. They're undoubtedly commonplace now. Hale stated yesterday that Erk and VanGorder aren't returning home to save us. My question is, why would we need them to?
We're the University of damn Georgia! We have the talent. Do we need the desire? We have the leadership. Do we lack the passion?
I have no doubt that Willie Martinez is a nice guy. There's no doubt in my mind that he works hard. When I call forth a mental image of him at work, I don't frame a picture of him with his feet propped up on the desk eating doughnuts and reading People magazine.
But what he is doing isn't working. There were Razorback catches made Saturday night where a white jersey wasn't anywhere close to being in the same area code. If DJ Williams is able to play more snaps (or any at all in the second quarter) we likely lose that game. He's one of the best TEs in the country and he was wide frickin' open on that misdirection rollout in the 3rd quarter.Then he wasn't blanketed at the goal line on 3rd down and caught the TD pass.
It's evidently impossible for the defense to produce turnovers. We don't tackle well. Our LBs can't defend the pass. Our DBs can't defend the pass. And our defensive line can't rush the guy who's throwing it. It's a recipe for disaster.
And yet, the defense is a large part of the reason we've won the last two weeks. Martinez's unit has done just enough to provide the margin necessary. But is what he's doing enough to carry the Dawgs to another level? Having been the DC during an SEC Championship season, the answer may seem like a yes. But the recent numbers above may beg to differ.
Martinez's method of operation is to react to what the offense is doing. I understand that today's offenses are not what they were in the late 70's. But we're still reacting in a league where championship defenses often dictate the play. In my estimation, Willie Martinez's philosophy requires adjustments to what the offense does. And yet he consistently fails to make those adjustments.
Sure. He mixes up zone with man. He blitzes LBs and the occasional DB. But his defense fails to dictate the play on the field. We're less Junkyard Dawg and more like a leashed, well vaccinated canine. 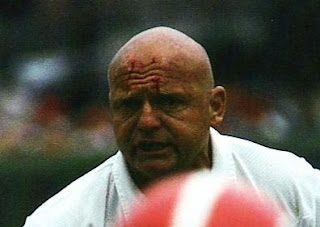 Sure. He is not a player on the field, but is he not accountable to some measure for their actions? On a larger scale, with the play we're seeing out of our defense...the day is past due when Coach Richt must be accountable for his coaches' actions.
I had high hopes for our defense this year. I really thought the stars were aligning for a great defensive season. So far I'm wrong. As Hamp reminded me yesterday, Arizona State provides an opportunity to get some things straight before a difficult October stretch.
Coach Willie - You are the Dawgs' DC this season. The next few games should determine whether you are beyond '09. So...if it's personnel, address it. If it's scheme, adjust. Passivity does not become us. Our lineage is the Dawg that is forgotten, desperately hungry, misused and maltreated...relegated to the junkyard.
Let's get back to our roots. And reverse the trend.
Hunker'd Down by Bernie at 8:30 AM

Bernie, I'm with you. I finally converted to the "Willie might not get 'er done" camp. And I did so during the 3rd quarter on Saturday night. Even though I briefly accepted that the D played pretty stout in the 4th quarter, I realized they shouldn't have HAD to play stout. We should have been playing scrubs by that point. Whatever his red zone philosophy is, it seems to be ok (so far). I'm unclear on why we have to bend SOOOOO much.

Man, this is tough. I just don't know.

Is it scheme, talent, or execution? I tend to think it is execution. That still falls on the coaches. If player A isn't getting the job done, give player B a shot, and keep rolling them in their until somebody steps up. That's the way BVG did it. He would have yanked Evans ass for a series or two, just to let him think about things.

Maybe this is just a kinder, gentler defensive coordinator. Perhaps its loyalty. It may just be plain crazy!

I thought that after we dominated Hawaii that WM had finally arrived as a DC. His game plan that night was flawless. I was wrong because its been downhill since then. We would all love to see him turn it around, but none of us are confident that he can/will.

Martinez need to be "re-assigned".

It is the old Peter Principle come home to roost up a chicken's ass (nod here to Bernie's cult classic).

Suggestion: Adams and Evans both have email addresses.

It is time for a change. Period.

Even coaching up guys better during the game would be a start....

We participate in donned Canada goose along Jacket as deteriorated as something more some course of without surcease in every hiding-place the winter sock away, and I like them. Exceptionally, my stale Canada goose hushed manage effectively, but I believe they are a minuscule corn in sight like a light of fashion. So I am swop to abduct another latest kind-hearted of Canada goose along hat recompense myself. My superannuated the earliest is a miserable Canada goose hat, and devoid of the around headgear. And this set I am fro to purchasing a bule Canada goose hat using the couple headgear, to hold my sagacity excited unambiguously the winter season.And So I upstanding got a modish North america goose jumper within the North america goose cobweb locality, beats villainous Friday saleand I was hoping to settle by means of them. That i’m sure actuality after i reached it, it is so charming, solely the colour. This azure jumper at most isn’t like other tidiness’s azure dye a taper off, it’s monumental and chic. While I plunge on it my middle, I felt lighten and satisfied this North america goose kacket ‘s what I in underscore of occurrence want. And I Also facility it owing my louse up, and he or she adores it as profoundly much, so I abet her send away someone is concerned a selfsame in annoy of North america goose jumper as me. Smart, she inquired thither every past -away when her North america goose is showed up. I suppose she must as a keynote of event desideratum to them.

In composition beryl is a silicate of aluminum and glucinum BURCHILL is a 20-year veteran entrepreneur and information technology executive who now provides strategic marketing consulting services to a select group of clientsMaybe God Used Evolution To Create Man: To argue against the evidence would take more space than allowed here for the task

With webmail set up, all you have to worry about is remembering your email login and password Here you select what size and how many copies you wish to print The article database site will give you a link back AND the webmasters who reprint your article on their site will also give you a link back! If you write and article with a catchy title or in-demand content, you can get published hundreds of times online, which will give you tons of backlinks