Happy Labor Day! ....OK! Now that the pleasantries are out of the way, let's get to work. 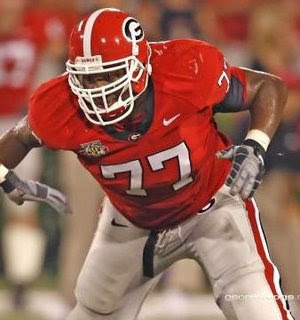 Raise your mouse pad if you were offended by our offensive play calling? There were more than a few things that irritated me about the loss, but this by far leads the field.

This offense was supposed to be Katie bar the door, no holds barred, punch ya in the mouth then run right by you. Come on Reader, you heard the same quotes and read the same articles I did. Like this one, where Bobo is basically drooling through his words over Wooten: "He's got a little bit more quick twitch than some of our other guys...he's got some change of direction. Not that the other guys don't, but he's got some quickness."

Heard a lot of rumblings about Cox as I left the stadium. Let's keep in mind the guy's not the type of QB to win games on his own. He needs a supporting cast. He needs to be put in a position where he can manage a game, not be forced to win it with his arm.

Ching says the entire offense is to blame in this crappy piece. We all pretty much knew that the offense wasn't a corvette. But Bobo has the keys the last I checked. There's enough talent to make it a dependable yard gaining machine.

Today's Ingredients
With every loss come suspensions: Fabris and Bobo...time to run some stairs. On second thought, Fabris...you can just run from the 30 to the opposite endzone about 5 yards deep. If you start to drift towards the sideline, I'm shipping you to Poland.

Great big Shout-Out to Nama for all the video footage this weekend. Glad you understand being the BDB technical director is currently a non-contract position.

Have a great Monday Reader. Don't Labor over the loss too much.

Bernie
Hunker'd Down by Bernie at 6:00 AM

Email ThisBlogThis!Share to TwitterShare to FacebookShare to Pinterest
Dawg Tags: Awards, Bernie's House of Estrogen, bourbon and the * key, Dawgs on the Road, GATArchives, Georgia Bulldogs Football, idiots not named Terence, neither red nor black

Don't you mean a T. Boone-sized paycheck for the zebras?

I was actually stealing one from Hale. T. Boone = T-Bone

So yeh, I'm sure those refs are each enjoying their own private windmill after Saturday's crapfest.

To finish off the Hale h/t, here's the link: gotta love that tee-bone!!

Nama came through. I loved the vlogging. Now, if I could only figure out how to put 8mm on digital...