Let's do this thang!

Trivial Update
Tailgate Predictions - take these to the bank, you'll thank me later
Studio Analysis
If you're a southern college football fan who's stepped into a stadium on a Saturday, you know that no other sport contains the passion and fervent desire that NCAA football does.

We whupp'd the cowgirls once. Two years ago they pranced in from a town we'd never even heard of with their glorified sissy-boy offense designed to finesse points outta the scoreboard. From what I remember the visitors left by the time the clock struck 10:00 in the second quarter. They were doing the hokey-pokey in the mid-west by the time we all got back to the tailgate. 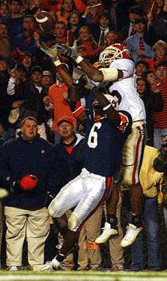 Now it's our turn to travel. The place is Stillwater. A town that wasn't even on the map until a YouTubeesque tirade two years ago placed it there. There's evidently a university there too that supports their team. And by university I mean megalo-millionaire with his own locker. Jim Dandy!

A singular Fat Bankroll is nice when you compete with other nancyboys, but this is the SEC by God! Our Dawgs have the undying support of an entire nation. It's a nation that follows every move, lives and dies with every play, cries for joy everytime Michael Johnson swiftly gathers in that carefully lofted pass, twists momentarily before gingerly getting each cleat down twice in a Jordan-Hare endzone.

This isn't about some big-headed mascot sporting a pistol and an orange hat. It's about the greatest mascot ever hiking his hindleg o'er the spur in your "cowboy's" boot. We've all had from January 2nd until now to take care of us. I've got me straightened out. We've looked inward long enough, we've been self-centered because that's what the off-season is for.

That was then this is NOW. When the Volunteers left us just mere seconds to win in Knoxville, we came together and broke their nose, we just crushed their face. When 60 minutes wasn't enough time in Tuscaloosa, we joined hands for a one and done. And the last time we were supposed to be skeer'd of some Big XII offense we punched that cowpoke in the mouth.

They think some 60K seat stadium is gonna strike fear in our hearts? PuhLEEZE!! If you're in Stillwater Reader, I better hear ya BARK!! If you're cheering from afar, I can't wait to see you next weekend, 'tween the hedges.

It's Go Time! Hunker Down Dawgs!

and all the people said "Amen"