Yes...I said it. If you don't believe it, please schedule your Dawg heart transplant...STAT! 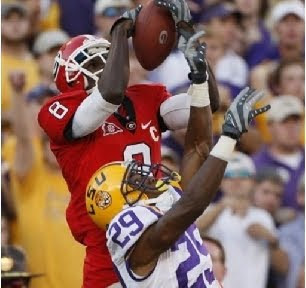 Bye weeks before the WLOCP mean extra preparation, for fans and for the team. So while some fans may be taking a little extra time for their Jax excursion, I'm sure the team is taking the starch outta the playbooks.

This team could use a wrinkle. Not necessarily a trick play. Just an offensive adjustment, something to add yards to the drives and move the chains.

Three and outs aren't gonna cut it against the mutha's team. Failing to cross midfield just won't work against the SECs darling. Getting the ball to AJ Green only a handful of times is to admit defeat.

AJs on pace for a standout season, career. This game doesn't hinge solely on his shoulders, but he's proven they're broad enough to carry more than his share. Greg Childs of Arkansas had 4 catches for 135 yards and a TD against this gator secondary. Childs is a good receiver...but he's no #8.

Want a clear front-runner for the Heisman? Read the papers next Sunday morning about how Coach Bobo unleashed Adriel Jeremiah Green on the vaunted reptilian defense. The stats will amaze you.

But it'll be the end result, the numbers on the scoreboard when the clock ticks dead that makes you smile.

Today's Ingredients
There's a lot of ways I could close this post. But none of the ways I considered are better than this...

Now Reader...go treat this Monday as if you were Vincent Dooley and it were Charley Pell.