I've always found cupcakes to be quite comforting...

Joe Cox is starting. Some sharp dressed undergrads will be named King and Queen. Mike Bobo will carry his chart along the sideline. Caleb King is starting. Bryan Evans will surely start. Willie Martinez will put both thumbs in the air. So all across the Bulldog Nation fans are coming to grips with the decisions they have no control over.

Perhaps more importantly, I'm preparing myself for all the empty seats at kickoff. Then again, like I said yesterday...some of these jackholes will be asking for their seats back soon.

On the field however, this should be a yawner. I say should because under different circumstances this would be no more than a walk thru at least, an exhibition game at most. But our Dawgs are a flawed team that must do work Saturday. 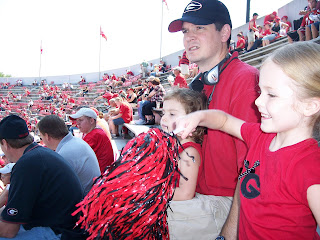 As Groo mentioned the other day, a heated contest looms. A loss to AwwBarn at home, at night, on big-time TV...would weigh pretty heavy in the balance for a season that can't seem to lift out of a sharp descent.

Some fans are lashing out, some are already more interested in NFL Scores. As for me, I'm like you Reader. I'll be there to see what the intensity is like, how Wooten and Brown do withGreen in street clothes, what Logan Gray does when not thrown to the wolves, what the rotation is like in the secondary, some more sick kicks by Blair and Drew...and to show my little girls once again the awesomeness that is Sanford Stadium.

That's right...I've got two dates for Homecoming. It ain't all bad.

Trivial Update
Q - Who was last year's Homecoming King and Queen?
A - Beau Gilmore as King and Bailey Simpson as Queen.

I vaguely remembered giving these two a shout-out in last year's post-Homecoming write-up. So I thought this would be information that would prove challenging when trying to find. Once again I underestimated the @allyugadawg databanks. For answering so effortlessly and taking another two-point lead over Mackie, Ally takes home a used Can Willie Cuz He Can't float, complete with motorized can opener.

Enjoy the parade evrybotty! And make sure to wipe the frosting from your lip there....no other side.