As promised, some names I'm not so thrilled about. When I type that, understand that it is a mixture of ignorance, cold research and educated guesses. Also understand that this is not a comprehensive list, just the ones I've taken the time so far to look into. The names below have been gleaned from three different sources, two I trust and one I frequently ridicule. I think by the end you'll see which is the latter.

Feel free to disagree, agree or even add your own.

Koenning was the Clemson DC during the Tommy Bowden era. He was basically fired/let go when Dabo Swinney took over. So he's been at KSU just one season. His time at CU was much like Bowden's, littered with stellar highlights (holding Calvin Johnson to zero catches in a 31-7 2006 win) and epic fails (take your pick). I asked my IPTAY connection about the Koenning tenure and it sounds like overall the fanbase was pleased with him. But when Dabo took over Koenning's inability to inspire his troops the way the new HC was looking for led to his dismissal. Given what we've seen from the Dabo tenure so far, I take that to mean he's too laid back.

Overall, I guess the resume just doesn't impress me. His defense from what I have read and remember seeing are a mirror of 's. I recall going with my dad to see a game a couple of years ago. It was a off week, so I figured I'd scout a future opponent. The Tigers destroyed CMU as expected, but the defense really only tried to contain LeFevour and relied on some turnovers to hold them to 17 points (if I remember correctly). 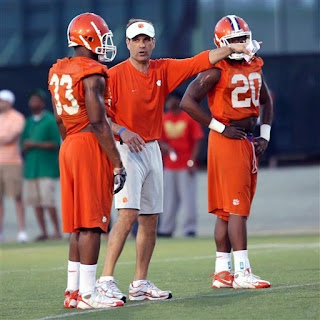 But..on Koenning's side is the fact that he has ties to CMR through the Bowden family.

Took over for Koenning in Clemson this season and was really the reason for their success this season. Steele you may remember, left Saban's sideline in the off-season to assume his role in . Again from the ...the feeling on Steele up there is that he's had his troops in the right place all season and that they've done very well all season except for about six quarters against the trade schoolers.

This is a name that at least intrigued me until Saturday night. Dad agrees that the Tigers failed miserably at stopping Dwyer and Nesbitt, as had the week before. During the drives when they did stop Dwyer, the pitch hurt them badly.

Maybe that's putting too much weight into just one game against a team we play on the last game of the season...maybe not. I mean, when you break your hand trying to fire up the troops before the game and then let them score 39 points...well, I think we've been there before.

Stoops name has surfaced thanks to the mutha up in . From what I can tell that is the only place it is being mentioned in connection with 's opening. However, one apparent source is a Gamecock site which states that there's a 80% chance that the new will either be Stoops or Sunseri.

So I give this little weight until I hear it from a different source. Right now it sounds like some nervous chickens anxious about the long shot of losing Ellis Johnson.

* just wanted to point out that this number is actually inflated by 5 INTs against Central Mich the first game of the season.

If not Smart, Travis Jones.

Bernie - I'm not sure how you feel about this list but me personally - I wouldn't be too excited with any of these three men (I know the three you have listed are only listed because of what you have heard).

Vic - never did anything impressive at Clemson and that is the ACC.

Steele - Apparently can't handle the ACC, yes he did well UNDER Saban but...GT went for 646 yards of rushing against his D in two games this year - I frown upon that.

Stoops - Good genes, that's all I have to say. I think he has done well at Arizona but he has never done anything in the SEC and knows nothing about recruiting this area.

The 'silence' of the next DC at Georgia is killing me. Hope we land someone a little bigger and IMO better than these guys. The 'do whatever it takes' statement shouldn't include these three men IMO.

Thanks for Episode II...are you going to have an Episode III tomorrow??

I really like Jones. It'd be awesome to get him back in Athens. Luring from the NFL can be shallow waters, but if CMR is sold on Jones' potential as a DC then it might be enough. Unfortunately, there's no experience to go on there.

I would think/hope these are bottom of the barrel options. All three of these would be difficult pressers for CMR. In other words, we'd have to have been turned down by everyone including my next door neighbor to get here.

Like I said yesterday, after Smart I think names could come from anywhere.

Unfortunately Jones does not have DC experience at a major college program (the one thing missing from his resume). However, it seems that the potential is there. He has continuously been a part of winning programs, has solid tutelage under Saban w/ a natl. title under his belt, etc. I think what attracts me the most is his recruiting ability. he was recruiting coordinator at LSU and did a smash-up job. He knows the South and the fact that he is African-American doesn't hurt either.

We are close with people in Youngstown, OH that know of Mark Stoops and that have talked with him in recent days.

This Georgia rumor should be taken with a MAJOR grain of salt because we believe it has NO validity too it. We believe someone is throwing his name out there as wishful thinking.

What we have learned is the following. He interviewed for the Florida State job this past weekend, and if he does not get that job, he will become head coach at Youngstown.