A Silent Night? Not So Much...

I don't know about you, but...THE SILENCE IS DEAFENING!!!
As I type and you read, either details are being ironed out on a contract for the new DC or...not. I'm sure Coach Richt has enjoyed not having to face the media this week, but it hasn't made the paint dry any faster. 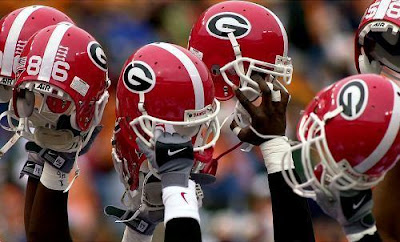 It's anything but quiet in the blawgosphere however. Rex has called it like he saw it, which led to this by the AJCs Bill King and Rex clarifying his point here and here. The criticism has been sharp...and to a large degree a little out of focus in my opinion. From anonymous bold comments not even made on his blog to blowhards on talk radio who can't even seem to remember the name of his blog. (By my count, John Kincade mentioned the Junkyard Blawg 7 times, while we still wait for the phrase Roughing the Kicker to escape his fat mouth.)
As magnificent as the internets are, they tend to create much bravado where there is only cowardice. They tend to make others sound foolish when they get too lazy with their mouse. And they also allow (crap)weasels a place for their (refuse). Case in point...the nerd who spat all over Georgia Sports Blog a couple days ago.
I don't know Paul Westerdawg at all, but I do know what a pain in the ass it is to have to clean up after someone else at your own place. I don't know Rex Robinson real well, but I know enough that his heart is in the same place as ours Reader. He loves the enough to call a spade as such when he sees it.
You know, there's no harm in disagreeing. We all have differing opinions and they should all be welcomed at the table. But every opinion should be an informed one. If we jump to conclusions and let our red and black spirit devolve into a cess pool of raw emotion and name calling...well, we are then no better than the reptiles to the south.
I rarely read the AJC anymore, and when I do I certainly don't waste time in their unmoderated comments section. And to listen to the talk radio guys, I'm not completely convinced that they even read Rex's blog...instead just took the cliff notes version. For those that can't don't read, maybe they'll at least take the time to tune in at 12:15 today when 680theFan's Chuck and Chernoff finally let Rex speak to his point.
I know I will.

Trivial Update
As mentioned, Drew Butler won the Ray Guy last night. So I thought it fitting to tweet a question for ThursdaysRTrivial related to the award's namesake. It was rare for a Ray Guy punt to be blocked. In fact, when his NFL career came to a close he left behind a streak of how many unblocked punts?
For the second consecutive week, @allyugadawg came in second place. But this week it was@Stuff_of_Legend who beat her to the correct tweet of 619. @phr34k also entered the mix to add that Guy only had 3 of his 1049 career punts blocked.
Well done. Enjoy the signature single bar Raiders' facemask Scott, while Ally and Tim attend a free Pilates class in an attempt to gain Drew Butler type flexibility. The rest of you can check out Scott's blog Stuff of Legend with one simple click.
the Friday Feedbag

Hope all the recruits in this weekend have a great time and the team enjoys the annual Gala. Especially the seniors. Our Supper Club is concluding another successful year of supping with a kidless night out at something called a restaurant. Evidently they have people there who bring you your food and refill your drink. Sounds fabulous.
Just hope my Tech buddy Miranda and I can get along enough to share a beer long without him getting jealous at the Dawgs’ de facto ACC Championship…ahem!
You have a great weekend too Reader. Only 13 shopping days left. No socks this year...please!
Bernie
Hunker'd Down by Bernie at 10:30 AM

Wow...I finally win Thursdays-R-Trivial (the game that is sweeping the porch), and not even a mention.

Story of my life.

My sincerest apologies Scott. This head cold has my brain befuddled.

Aw, hell...you linked to my blog. Now I have to actually update it!!

Thanks for the shout out, and a HUGE thank you for your continuing blogging excellence as so many of us have at least temporarily abandoned our posts!

Here is the scoop on the new DC