This comes courtesy of a buddy who, when he's not brewing Miranda's Climate Friendly Ale is obviously scouring YouTube for golf courses that can challenge his game. (As a side note - I once saw him win a fight with a driver....bent it right across his knee and threw it to the bottom of a pond to chase his Pinnacle 3.)
Epic. Just like this hole...sheeeeesh! At least yelling FORE! isn't really necessary.
Hunker'd Down by Bernie at 7:51 AM 2 comments:

Email ThisBlogThis!Share to TwitterShare to FacebookShare to Pinterest
Dawg Tags: as seen on YouTube, phone lines are open, WLOCP

This news could cost this gator millions.
Hope it was worth it Percy Harvey. Go gator... 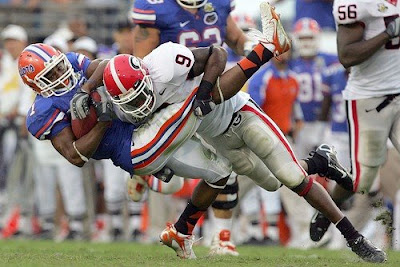 Optimism Meets Reality, Both Can Be Wiley

At 11am this morning Damon Evans will introduce the biggest hire of his tenure as UGAs Athletic Director. The second guessing... well, that began long before he made his decision.

Mark Fox may one day be recognized as good a coach as Pearl, Donovan, Calipari...but on April 3rd, 2009 in name recognition only, he couldn't be any more a polar opposite. Fans are left wondering how we went from Anderson to Fox.

And for that I believe Evans must take some blame; his words set the fanbase up for a BIG hire. He set his sights high and the media and the fans took off running. From the sublime (Capel) to the ridiculous (Knight). While the mutha and the AllJackCrap pimped their supremely vetted candidates, fans ran rampant with names from Anthony Grant to Tom Izzo. 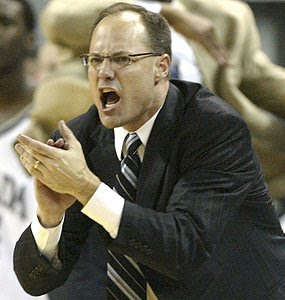 But give credit to Evans for putting the faith and the resources into a program that has lacked both for years. He aimed high and has given this alum reason to believe hoops is on the rise in the Classic City.

This hire will immediately and continually be compared to Bama's with Grant. There was a public "discussion" between Donovan and Adams re: Grant; both Grant and Fox have been successful at comparable programs; Bama went sans search firm, while Evans added the support of extra eyes and investigative resources; and there was the obvious "pass" on the interview as Bama zeroed in on Grant.

I am of the opinion that Grant would have made the better presser, but fall short of feeling he's all that with a side of chips. The one advantage Grant has over Fox at this point is that he is more familiar with the recruiting roads in GA.

But sometimes a fresh name/face/blood can do wonders in sparking an interest, developing and repairing relationships. My guess is Fox will be able to hold his own there. At least until Jacob Dominique Wilkins turns 18 and chooses UGA for his hoops scholly....in 2024.  : )

I think in the end this hire and the process as a whole fully represents where our program is: looking for the best, but forced to settle for potential. It was nice to dream about Capels and Izzos, but if we wake up with a hidden gem I think we're just as happy.

Some programming notes: if you are looking for this week's discussion on Athens' battle against trans fat, it's here. And BDBs official welcome to Coach Fox is here.

I'm on vacation as of Friday after lunch, but have a few things in the can that will keep you occupied while I'm away reader. Of course, if Jenn and I don't win our tennis match tonight, she may have me pack the car just to watch it leave without me.

I'll leave ya with this: a month ago tomorrow, I laid out the facts for ya reader. I posed the possibility that Evans could be at the table with pocket jacks or trying to draw into a flush. I think he has four clubs and as a fanbase we'll wait to see what the river card turns up.

And hopefully it doesn't come up Eustache. Happy weekend! 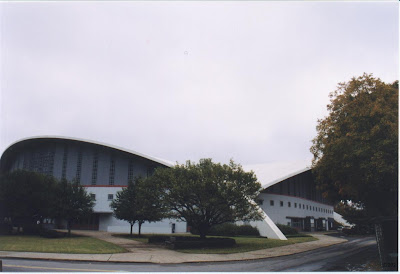 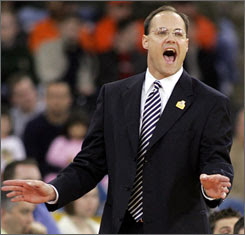 Reader, link yo'self!
Towers broke the story
Mark Fox Bio
PWDs rundown (plus a plethora of comments, most of which are coherent) 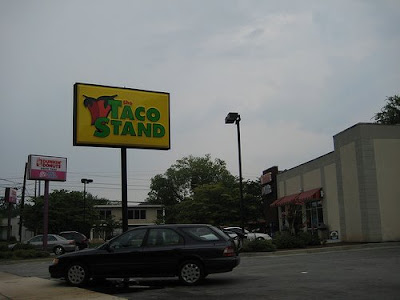 Recently the hardest working man on the Georgia Dawgs' beat told us of a new business opening in Athens: a place called Rita's Water Ice. As an Athens native and a UGA alum, it got me thinking (as dangerous as that has proven to be) about eateries around campus...
A hmmm....turned into an uhmmmm!.

An empty stomach after a hard day of frisbee on the quad and playing pool at Tate is a bad combination for a college student. Let's take a trip up Baxter and grab some Guthrie's!

My doctor likes to tell me that I'm still carrying some of that Guthrie's special sauce in my arteries and that all those hot wings from Steve's have taken their toll on my HdL, ....or is it LdL.What the hell! It's probably both.

But I just smile, grab that cold metal disc he's placed on my chest and holler into it, "What can I say Doc? Me likes me some Taco Stand!"

So far we've lent our ears to the southwest corner of Sanford and sobered up in some memories of big wins on campus. Today let's grab a handful of Herbie's Balls and talk about our favorite "meals" around campus. 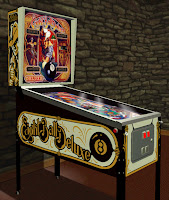 I don't want to restrict you reader to just food on campus. Afterall, I worked a decade one year inside Bolton. I know how they made that chocolate pudding. So imagine a large triangle from South Milledge all the way up to Prince (grab me an order of onion rings, a chili dog and a frosted orange on your way by the V) and then head over to the East Side and cop a squat at Mama Sid's for a slice.

Pass the bleu cheese and tell me what Athens eatery is clogging your vessels?

Issues, topics and otherwise random propositions for your mid-week ponderings:
And lastly, David Hale is reporting in his links today that Ron Jirsa is serving as an advisor to Evans at this point in the search. Let's all meet later at Burger King for a left-handed Whopper. I hear they don't come with pickles.
Don't look now but your shoelaces are untied. 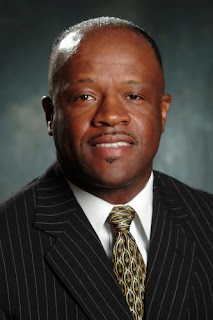 UPDATE: ESPN confirms that Anderson has re-upped with Missouri ending the Anderson to UGA saga.
______________________________
UPDATE: Towers of AJC fame has spoken to the supercilious Sexton (Anderson's agent) and he refuted Schlabach's report saying UGA has yet to make an offer to his client, which he implied is unfortunate.
Bernie asks: is it possible an agent is working more than one angle?
_____________________________
As expected (and hoped), Mike Anderson has been offered the Head Basketball Coach position at UGA. Multi-year, 2+ million per, according to Schlabach of ESPN.
Now we wait....
If Calipari goes to Kentucky, Anderson will likely have a decision to make and word is Evans has another offer to another candidate ready to go. If Calipari stays, then this may be a slam dunk.
Either way, the Felton chapter will officially close in a couple of days and a new era will begin.
Hunker'd Down by Bernie at 10:21 AM 5 comments:

The Coaching Search Just Went out for Recess

And it's kinda like a free-for-all.
The only thing that is relatively certain is that Damon Evans is not set to hire any of these guys -
Another relative certainty is that Calipari is headed to Lexington. PWD at Georgia Sports Blog has a rundown of the rumor mill including what is fact, speculation and just plain fun to read. And David Hale has two shiny pennies that easily add up to his two cents.
What do I think will happen? I think we're about to sit down at the high rollers table and hopefully will walk away with our new hoops coach. If someone has a better hand we may know by the weekend what our Plan B is.
And I'd rather never find out.
UPDATE: Calipari decided to "lemme sleep on it" before he travels to that paradise by the dashboard light, AHEM!. Lexington. And PWD has his eyes on travel logs.

Sometimes the answers to life's puzzling questions are right under our nose.
I noticed this weekend that our computer was not connecting to the world wide web. After tapping the monitor with my finger a few times, rebooting and then lightly kicking the CPU with my left foot I refused to panic.
I went to bed.
The next morning it didn't take long to realize that the internets fairies had not visited my home office. So I tapped the monitor a few more times, shook the keyboard a little and then prepared to call Ma Bell. 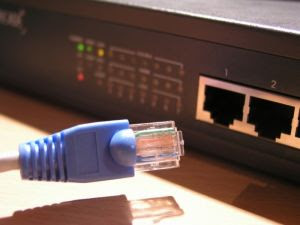 Ma and I go way back, but we don't always communicate well over the telephone; she has a tendency to transfer me to someone else who can help, then repeats every five minutes.
So before resorting to that drastic measure, I decided to check things over one more time. It wasn't long before I saw that the cable the world wide web comes through and into my home was unplugged. For those of you less knowledgeable than I am about technical thingiemabobs, this would be the equivalent of someone unplugging the picture box in your living room and turning the screen black.
So I plugged the cable back in and immediately found out that while I was away from the internets there was a wealthy businessman in Zimbabwe that needed my help and banking account to hide his money.
Whew! Disaster averted.
In other recent news, Georgia signed another kicker - Brandon Bogatay of San Diego. This is being hailed as another opportunity to cure what ails our dreadful kicking game. But like an unplugged cable, the answer to that problem could be as simple as a quick fix.
The Senator has some statistical analysis that is worth some digestion. As bad as our rankings were in kickoffs last season, it may not mean a hill of beans. Then he follows that up with the path that led us to recognizing the name of Bogatay.
Personally I didn't see a whole lot wrong with Walsh's technique, other than some freshman jitters at times. I always welcome competition and maybe this new kid can bury the ball deep into the endzone more routinely and is more consistent in placing the pigskin between the uprights.
Then again, maybe he's just another kicker that we teach to kick to the left hash on the 20 yard line. Plug that thought into your circuit and see if you think it's wired correctly.
Today's Ingredients
Should be an exciting week with spring drills nearing their apex, Evans poised to make the signature hire of his tenure as AD and Bernie making final preparations for a little vacation next week. Yup! Hitting the ESC key on the keyboard did little to repair my internet connection Saturday, but loading up the Tahoe Saturday will help the Bernie family escape the perils of civilized life.
In the mean time, stick a fork in it reader and call it lunch.
Bernie
Hunker'd Down by Bernie at 3:16 PM 1 comment:

If I were to start my own professional baseball team...the first player I draft is this guy.... 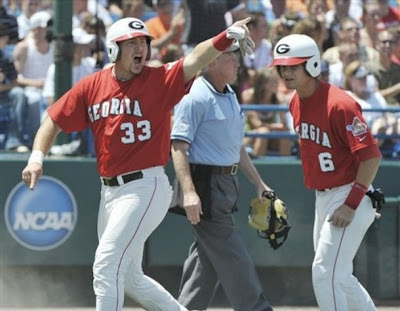 Rich Poythress is a man among boys in collegiate baseball. He wore his cape again Saturday in Knoxville and helped the Dawgs to an 11-9 win, ensuring their first series win there since 2001.
Hunker'd Down by Bernie at 10:42 AM 1 comment: