Empty Solo Cups Are a Drain on the Economy

Top Ten Signs Your Vacation is About Over 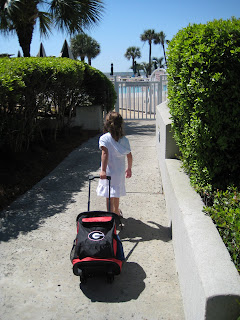 10. G-day has arrived.
9. If you eat another cheeseburger by the pool you might burst.
8. The wife has threatened that if you play golf one more time, the trip to Stillwater is off.
7. Your wallet is about as thin as the lone dollar bill than occupies it.
6. It's moving day at the Masters.
5. You're developing a rep as the grumpy old man by the pool who insists ALL children display a modicum of civility.
4. The transplants from Michigan are really starting to get on your nerves.
3. Your kids are sick of your sense of humor when you tell them the ice cream shop ran out of ice...then ran out of cream....then is closed on Wednesdays....then only serves to grown-ups....
2. Filling up a cooler every morning and lugging it to the pool is just too much work. 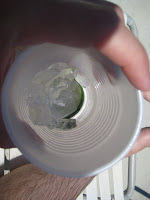 1. Your margarita solo cup looks like this
Friday's Feedbag
* OkayOkayOkay! Here are the rosters....
* Mark Fox has wasted little time in rounding out his staff.
* Kris Durham will not be dressed out for Saturday's G-Day game...or any game the '09 season.
* Meanwhile it looks like Charlie Weis has met his match on the recruiting trail.
* Orson Charles is ready for the Dawgs to beat floriDuh and is putting his money where his mouth is...in Athens, not Daytona Beach.
* KiffyBaby not only kicks a brand new father off the team, he does so before letting his teammates in on the news.
* A great look at the details that CMR is focused on this spring.
* Jeff Schultz has a look at one amatuer's rise to the hallowed fairways of Augusta National.
* And if you're like me and love some nice statistics to grapple with, the Senator has your hook up.
Boys and girls, it's been real. But real life beckons and Bernie can only turn his back for so long. Plus I know my lone reader is pissed at the lack of meterial this week.
And I thought my life was dull.
Don't forget your cans tomorrow. Then tip your cap for lots of points, lots of turnovers and NO INJURIES!!
Bernie
Hunker'd Down by Bernie at 12:01 AM 2 comments:

Classroom Achievements - Raising the Bar, or at least Lifting it Momentarily

Discussion Wednesday, as popular now as spearmint flavored dental floss. (Come to think of it, that may be an exaggeration.)

So far we've looked at big-time campus wins, campus traditions and favorite Athens eateries. And by the way, there's a Rita's across the street from the condo here in Hilton Head. As Hale suggested, definitely worth the trip....no, not all the way to HHI for a water ice. I meant to a Rita's near you.

We had cousin Matt over for dinner tonight and he reminded me of a (notice - singular) time I rose above the bar in the classroom while on campus. Matt definitely gots the more smarts in the family. After all, Bernie was not invited to apply to become a Rhodes Scholar.

But there was this one time I was the only (again - singular), the ONLY student to show up for class.

It was spring of my third year and I was well on my way to becoming a sophomore. I was taking Spanish and had about 25 other classmates. The class was a MWF 2:20 appointment and I was doing pretty well, or as they say in MehHeeKo - b w a y - N o h.

I had stayed late at Tate to wrap up a pool game, but was still ahead of schedule getting up the hill. And when I walked into our classroom - it was empty. I stood in the doorway for a moment and racked my brain for a reason, then cursed myself as I walked away for forgetting a major detail like the professor (or as they say in Spain, p r o -F e s - s o r e) canceling class on a Friday.

I got halfway down the stairs and for some reason decided to go back - perhaps feeling as if I had entered the wrong classroom. This time as I stood bewildered in the doorway, our professor walked in moments behind me.

Crapnockers! Now I had no way out. The entire class was at some park playing frisbee and sunbathing, no doubt laughing their arses off at me - the only sucker dumb enough to show up on nearly a sophomore skip day, stuck here with Profesor Jaime.

Then it happened. He asked me if I had any questions in kind of an impromptu while we're here and today's lesson is shot I might as well help the one dumbass that showed up way. I paused and suddenly saw my only chance at scoring an A in the class.

Of course I said. Then I made my best attempt at coming up with a question, left him with a very passable look of appreciation and was starting my weekend by 3:02pm. 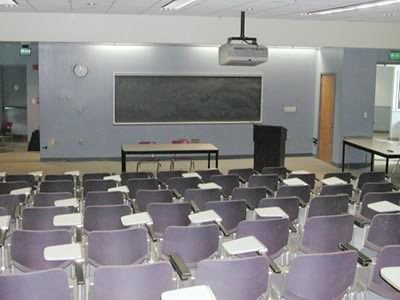 A dramatic representation of Bernie's Spanish class one Friday

So what's your classroom highlight reader? What class presentation did you ace, what group project did you dazzle and amaze with, ...or were you one of my espanol classmates who played frisbee that day?

Email ThisBlogThis!Share to TwitterShare to FacebookShare to Pinterest
Dawg Tags: A Confederacy of Dunces, Bernie Bleeds, Dawgs on the Road, Hog...the other white meat, KiffyBaby, neither red nor black, Prez Adams

What can I say?....while on vacay, a margarita goes down so much more smoothly than...meatloaf.

Sixteen years ago I wrote a letter. I was nearing the end of my years at UGA and had a bug in my britches over an article I'd read. It seems one Mark Bradley had it in for a man I held in high esteem - Dean Smith.
In the spring of 1993, Dean Smith was one of college basketball's greatest coaches...but had managed just one national title. Bradley thought Cincinnati the better team and threw the Heels to the curb and Deano under the bus.
My letter scolded Bradley and ensured him that he would be eating a slice of "humble pie" by the end of the tournament. No doubt drawing from my over confident collegiate cognizance, the Tarheels beat Huggins' Bearcats on their way to an impressive national title run. To help you gain the visual - it was aided in part by a Chris Webber TO....problem was Meechigan didn't have one to spare at the time.
I've searched my "archives" (aka - the deepest depths of my closet) for the actual letter. No luck. But trust me - it was quite the masterpiece. Nothing like those AJC forums that devolve into a crap load of claptrap. It was well written, to the point, succinctly versed...and undoubtedly had a lasting impact on whoever was Mr. Bradley's intern at the time.
I mention this only because later today UNC goes for another nat'l title tonight; possibly their second under Roy Williams. UNC is my pseudo collegiate basketball dance partner...you know since as a native Athenian the Dawgs rarely provided the exposure a pre-pubsecent mind could really grasp hold of for longer than a season.
That and Mr. Bradley is now following me in the "tweetosphere". No, he never responded to my letter back in 1993. Not even when the Tarheels proved up to the challenge against a difficult regional. Not even when one of the greatest coaches in the history of the game cut down the nets in New Orleans after defeating Meechigan's Fab Five.
Not even when my humble pie was fresh from the oven. A dallop of Cool-Whip Mr. Bradley?
There's a small chance Bradley may read this. Maybe he'll respond below. Maybe he'll hit me up in a "tweet".
Maybe not. Regardless....Go Heels! Spartans mothers have too high of expectations...
Add these to a cool pitcher and stir well:
If there's a site more beautiful than your little girls enjoying a heated pool beside the beach you just left, begging you to take a dip as you finish your (very) cold beer...brother, I don't know what it is. I'll take five more days of this before I meet you in Athens reader. Don't forget your canned goods.
As a matter of fact waiter...I would like a refill.
Gotta go! Salted or unsalted?
Bernie
Hunker'd Down by Bernie at 12:01 AM 6 comments:

You know how when you were taking a multiple choice test and the answers just started jumping out at you? Suddenly you're screaming along towards an easy A, selecting answers as if they were classes listed in the OPSTAR (punch card and a prayer, h/t Mike in Valdosta).

Then all of a sudden you go right by a question without even taking the time to focus on the true answer. The teacher slipped one in that completely caught you off guard. You smiled confidently right up until the time you got the test back and realized you had fallen for the oldest teacher's trick in the book. Sucker punched by that attractive answer choice A. 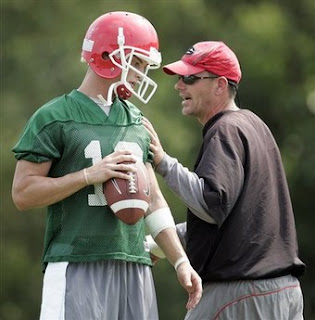 A similar test is being passed out in spring drills over outside of Butts-Mehre. Logan Gray is that elusive answer choice D that is being over shadowed by the 5th year senior who hasn't lost a game since before he could drive to high school and the two young pups still being suckled by Bobo and overwhelmed by his playbook.

Marc Weiszer has a piece on the dual threat QB from Missouri that looks at his chances at cracking the lineup, or just simply getting onto the field for a spell (see - DJ during Greene's reign supreme).

I've said before that I'm not a big fan of signal callers anywhere in between the hash marks during their freshman campaigns. The last time we tried that it was certainly out of necessity, but it also led to losses to Kentucky...and Vandy during Homecoming. The decision rebounded in time to see Tra Battle beat the War Tigers nearly single-handedly, but overall it was just building blocks to the following season.

I'd prefer to ease 'em into the SEC den of thieves.

Weiszer's not the only person to recognize this trend in appointing Murray and Mett the lead Dawgs to press Cox for playing time this fall a little too soon. Hale gratefully showed his deadhead side as he broke down the redshirt sophomore QB using a touch of Gray a couple weeks ago. And Belue adds his weight to the QB issue as well; although he's more concerned that people are overlooking Cox.

Do yourselves a favor at G-Day Saturday: when #6 trots onto the field, pay some attention. He might be an answer choice this fall....and beyond.