Heading out to coach my last soccer game....maybe ever. While the little lady's upstairs making sure all the pigtails are straight, I'll give ya some Dawg flavored headlines.
Gotta go put a team of Mia Hamm wannabes back in their place. Then I'm thinking the grill may need to be fired up. Gotta love weekends!
Hunker'd Down by Bernie at 7:15 AM No comments:

The steamy affair between KiffyBaby and Pahokee may have reached its apex this week. It truly is a love-hate relationship: the voWel head coach loves the community's players, and the community hates that their sons are considering trading in their jorts for overalls.

Bernie reached an actual Pahokeean by phone to confirm that the Lake Okeechobee denizens actually do NOT know how to operate a fax machine. Unfortunately, we were disconnected before I could finish Hello, my name is Bernie and I am a bloggerrr... 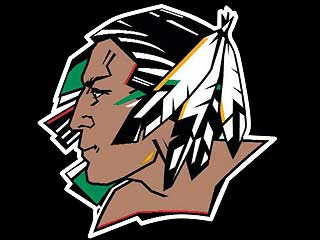 Lil' Kiff has issued an apology from the bottom of his seat pants, but it's as if it is being met with deaf ears. Or maybe it's just that the average IQ in Pahokee rises into triple digits, unlike Knutsville where it fails to sniff 70.

Maybe they should all take a page from the North Dakota Board of Higher Ed, which yesterday decided to remove the hostility from the University of North Dakota's nickname and logo. No longer will the school be known as the Fightin' Sioux. Instead, the North Dakota Southern Canadians will invade Lubbock September 5th.

Awesome. It's so nice when we can all get along.

Friday Feedbag
Went to my five year old's "graduation" from pre-K last night. With all the video cameras and flashes and cell phones in use...I wish I had been a battery salesman.
As the kids walked across the stage to receive their props, the announcer would give their name, where they will be continuing their education next year and what they wanted to be when they grew up. Amidst all the future doctors, superheroes and armymen was one little girl who aspires to be a teenager when she grows up.
It was funny last night Ainsley. I don't know that I'll be laughing when the day arrives however....
I was also shocked to hear that not one of the little boogers wants to be a blogger. What will our future generations do for accurate and unbiased commentary on life's most critical ingredients? Rest assured though Reader. I'll be here until the keyboard withers away from underneath my callused fingertips.
Whether it's good or not...Have a weekend!


Bernie
Hunker'd Down by Bernie at 6:18 AM No comments: 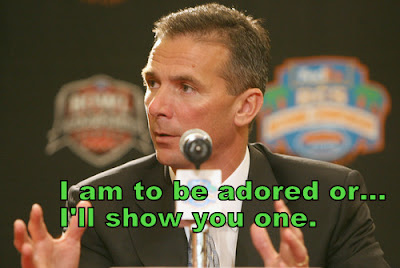 ...but there's a lot of MEyer.
Slurban sits atop the mountain many active coaches have yet to crest. He's won two MNCs since travelling from Utah to sunny Florida. He has a Heisman Trophy winning QB returning for his senior year under...er....behind center. He has yet to buy his own meal in gatorsville.
So why the scowl? Somebody keeps using his cheerio bowl as a urinal and Corch Meyer don't like the taste.
I say keep pissin'. He'll get over it or get outta town.
The ego of this guy. He never played a down in the swamp. Or smiled at seeing a crap-faced, mullet-headed, jort-wearin' "alum" scream himself out of the wife beater he was wearing.

Shane Matthews did play in the swamp. He was a rock star quarterback for the Visor's Fun N Gun. And he once sported a hair-do that was a little bidness in the front and a little party in the back. He's a gator through and through.
More importantly he's a radio jock. He's paid to give opinions whether they meet with Captain Crotchedy's approval or not.
Meyer...not necessarily a gator at heart.
Perhaps Senator Blutarsky found the best analogy for the ego that is Corch Meyer. This blawgger thinks it is all part of a master plan:
Slurban sits behind his desk with his bright orange kicks resting atop his desk and his fingers placed delicately together, tip to tip. He's got all the pieces of the evil puzzle strewn about the swampland. Easy skedYule. Senior signal caller. Local cops on the payroll. GatorNation dichotomized into those who love him like an 18 foot reptile...and those who were not successfully peabrain-washed.
In his mind all he has to do is place the pieces together, show up to New York and watch TeeeBOW collect another trophy, run away with another MNC over runner-up Ohio State and then cry foul!
Shame on you morons for not worshipping me! I've done nothing but givegivegive. I'm outta here!
Lastly, secure plane ticket to South Bend.
Posts and Pieces on topic:
Hunker'd Down by Bernie at 7:45 AM No comments: 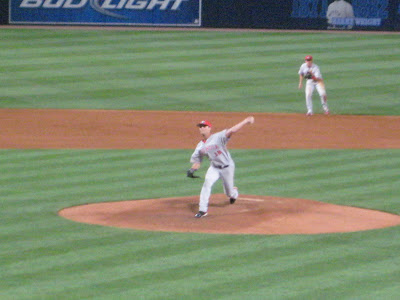 While it wasn't the blowout Bernie predicted, the Diamond Dawgs continued to gather some momentum heading into their SEC regular season finale this weekend in Chickumbia with a 7-5 victory over the nerd herd in the Spring Baseball Classic for Kids.
Hank Aaron left the keys under the mat, so the teams played this one at Turner Field. It gave a few Dawg players a glimpse of a stadium they may play in professionally someday soon, as a Brave or a visitor. And it gave some yeller jackets a chance to play in front of more people than their parents.
In unrelated news, I left Bob Horner some cheez wiz and a couple of empty beer cans in case he's thinking about a comeback. In even more shocking news, the jackets' fans may have actually included a handful of alumni.
The event was spectacular as usual and went off without a hitch...except that the crew who set the scene for the kid (sorry, missed his name but got the picture) to throw out the first pitch. As they're clamoring for him to throw the ball he looks at them and shows his empty right hand... and emptier glove. 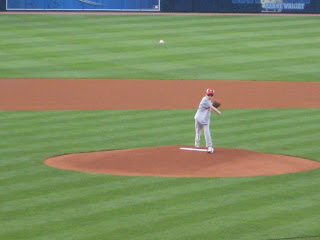 A wonderful reminder that you can learn more from kids than you think. To throw a pitch, you need a ball.
Shout-outs!
Suspensions - just one, for the beer guy that never came back with a cold Bud in the fifth.
Diamond Dawgs resume action this weekend against the Gamecocks, however it's a Thursday - Saturday series. So adjust your calendar accordingly. 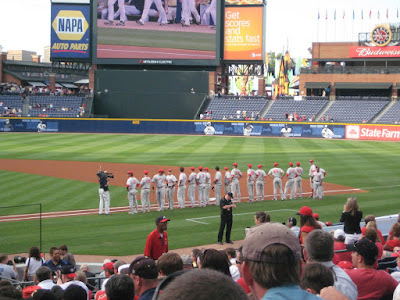 We'll bring our Easton bats. They'll bring a slide rule. Dawgs. Bug. Athens. N. Avenue. Perno. Hall. Chipper's outta town. Computational Physics exams have been graded.
Must be time for the Spring Baseball Classic!
Throw out the first pitch at 7:06pm, but throw out the recent skid by the Diamond Dawgs before you hit the Grady Curve. That's not gonna be a factor.
Poythress totes an Easton bat and swings it with fearless abandon. Records crumble in his wake. Nerds' knees shake like maracas when he approaches the on-deck circle. Women cry, but they're tears of joy. RBIs come so easily for 33, Rich isn't just a name for him...it's a lifestyle.
Cerione has a knack for the dramatic. Ice water flows freely through his veins. He lays out GW hits like he's swatting insects with a rolled up Red and Black in his house. Less print stained guts, but just as lethal.
Wanna talk fearless? Zach Cone's home is full of bug paraphenalia. Dad lettered in tackle football. Mom's a helluva engineer. Brother and his teammates beat us 'tween the hedges back on November 28th. It's an abode ripe with intellectual capabilities, but little color of consequence.
Despite the family's handicaps...Zach's a Dawg. He wears red well. Proudly.
I feel ya bro'. Let's do this thing. Too lazy to support a good cause Reader? The Ted too far to travel in the middle of a work week? Allergic to short sleeve dress shirts with too many functional buttons?
Then I guess FS South has your hook up. But don't wait up for me. I'll be home late, cuz... 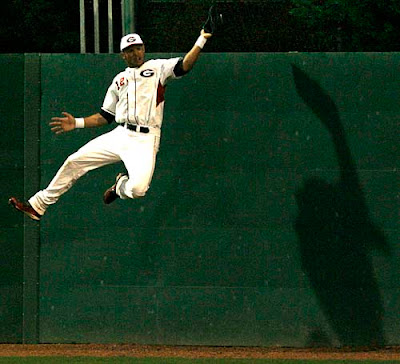 Monday's Meatloaf - Second Fiddle and Proud of it

After cooking, cleaning, pampering and shopping to make the little lady's weekend more special than the average one, I'm convinced they should have one of these Day's for Dads. You know, as long as Hallmark approves.
And it never fails...Dads can go to all the trouble of fixing the perfect meals, providing breakfast in bed, dropping a few dimes on some nice earrings...only to get upstaged by the kids, his own flesh and blood.
Raise your hand if something similar happened to you.
Saturday morning, Ainsley took the opening kick on the pitch, touched it twice and buried the ball in the back of the net. By the time she turned her eager smile towards Jenn and shook those pigtails while providing her trademark thumbs-up, I knew everything I could add to the weekend's fare was equivalent to second fiddle. 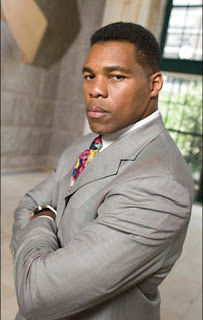 Then Sunday morning, Conner takes her flower pot full of tulips (made entirely out of construction paper and Elmers), each with a chore scribbled on it that the seven year old pledges to perform at a moment's notice. You'd think after seven years the kid would've realized that her momma doesn't cook, clean or feed the dog.
Ignorance is bliss. But despite it all, I wouldn't trade any of it in for a minute's worth of labor. It's good to be the dad.
Mama's Ingredients 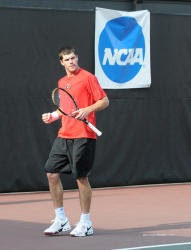 Most bloggers might be shaken by the fact that their moms comment on their posts. Personally, I welcomed it. If nothing else it provided an opportunity to clear up some broken lamp issues both in Athens and in Illinois. And for those who were concerned, Bernie's mom had a great Mother's Day full of Dad's grilling, Hailey and non-collect phone calls.
Congrats to the mens and womens tennis teams for advancing to the round of 16 in the NCAAs. The women defeated Boise St (I know right?....I didn't know there was tennis in Idaho either) and the men defeated VA Tech. Play resumes Thursday and Friday respectively.
Speaking of play resuming, see everyone out at Turner Field Tuesday night for the Georgia/yech baseball game. All proceeds go to Children's Healthcare of Atlanta. If the Diamond Dawgs don't bring some pitching, hitting and fielding...Bernie will be the one being escorted out around the seventh inning stretch.
Plummet from 1st to 5th in the SEC standings in a matter of weeks - bad. Lose to NATS again - worse!
Here's a napkin Reader. Happy Monday and all that.
Bernie
Hunker'd Down by Bernie at 6:34 AM 4 comments: