My humble blawg was trampled earlier this week and I've spent the last few days cleaning up the dung. When you're averaging one (singular) reader a day and suddenly are averaging nearly 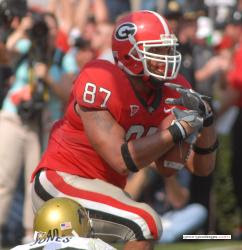 50 an hour...well, I eventually figured sumpin' wuz up. Turns out some Colorado football fans caught wind of a post a couple of weeks ago relating to our Dawgs possibly moving an away game to the GA Dome and link'd it to a message board thread.

So I learned that buffaloes are a paranoid breed. They not only remember being 27 point underdogs in '06 and only losing by one, but it is a brightly colored feather they have stuck in their cap. The thought of not getting a crack at Joe Cox and Jeff Owens' successors in their own stadium is filling 'em full of false bravado.

And as much as I welcome visits and clicks, getting link'd at a site entitled netbuffs.com isn't a feather for my cap. Watch your step. I think I missed a pile.
Saddle up...it's a three day weekend-sized...

Don't forget that free t-shirts are being given away tomorrow at the 3rd Annual Skin Cancer Awareness 5K Run/Walk to any participants who finish ahead of Bernie. Those that finish behind him can hand over their self-respect at the finish line. So wake up, drive down, lace 'em up...and you're all but guaranteed to be rewarded. 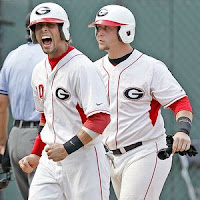 After that there's a full weekend of family fun, relaxation and some char-grilled goodness planned. In between, I'll be keeping an eye on Hoover and doing some vehicle shopping
evidently. Sure hope the Diamond Dawgs transmission isn't slipping like the one in my Dodge Ram. So it sounds like a good weekend to give the oven some time off. Afterall, who eats meatloaf on Memorial Day?

God bless those who have paid the ultimate price for our freedom. Bend a knee, say a prayer, raise a glass - or do all three.

Have a weekend Reader.

Just another plug for a great event for a great cause. I mean let's face it, you're not gonna fire up the grill or ice down the beer until later Saturday afternoon. So why not come out and get a little excercise and a free screening.

Here's a link to the SCAN Foundation website for more information - CLICK HERE
Here's my first shameless promotion w/ actual pictures of Dooley - CLICK HERE
And here's a summary of last year's event - CLICK HERE
Hunker'd Down by Bernie at 2:00 PM No comments:

An Evening with Coach

I've never man-dated, but when a friend invites you to tag along to ESPN Zone to a Meet and Greet with Coach Richt...well, I'll give it a go. 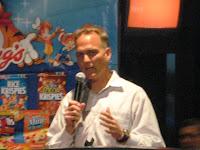 On the way down Peachtree I decided to take the opportunity to pretend I was the great David Hale, or a member of JensenSports, or even a beat writer for the AJC. When moderator Randy Waters asked for questions from the audience I had at least 20 lined up.
CMR was gracious enough to answer one.
It is through countless tears that I type to you that he indeed does NOT read BDB, or any blog for that matter. Guess that comes as even more of a shock to respectable bloggers like Senator, Exhile, PWD, newcomer Rex...maybe even Mackie. But to be honest...how could he not read Hale. Even my wife reads Hale.
Ouch...maybe I shoulda led with the Will you and Kathryn join our Supper Club? Or perhaps a mundane How do the guys look in shells Coach?
But the excitement heated up when my date revealed to all within earshot his true Oregon State colors. After I thanked Coach for his time, Cord pressed him for a time and day when the Dawgs would play the beavers, head to head, mano eee mano.
Get this...Coach asked if that was the University of Oregon. (Oh no he dih-ent!?!)

I thought Cord (a former Beaver FB) might bulldoze our fearless leader. Luckily the smell of more chicken tenders and warm tater-skins distracted Mr. California HamDog long enough for a housewife from Marietta to move in for her face time.
Disaster averted. Some other thoughts and surmisings:
You're welcome Reader. While other prima donna media types are covering high profile stud recruits, high school baseball or at home eating Haagen Das...your faithful blawgger is on top of the comings and goings of the state's biggest rock star.
And even though he and Kathryn won't be hosting our next supper club, I'm pretty sure Coach Richt comes by this area of the cybersphere every once in a while. So...thanks Coach!...and kick Urban's ass on Halloween. There's some extra Rice Krispie treats in it for ya!
Bernie
Hunker'd Down by Bernie at 9:23 PM 8 comments:

Some pics from last night. I'll have a more thorough synopsis up later today, including a video where CMR admonishes me for having no accountability. Well, that might be overstating it some, but you get the point. 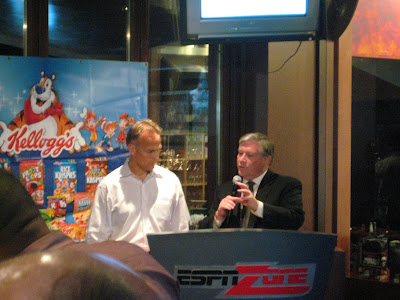 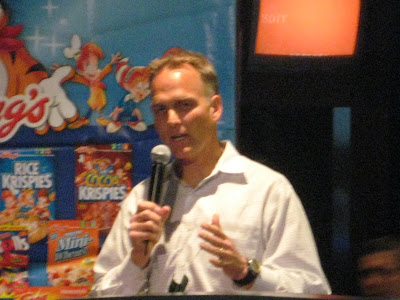 Explaining how he manages recruiting 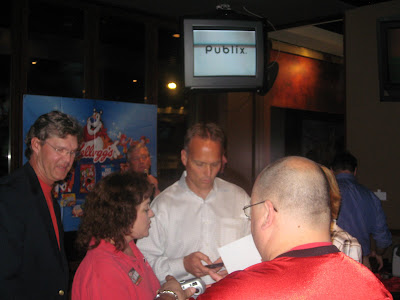 Hunker'd Down by Bernie at 9:11 AM No comments:

Let's clean off the desk... 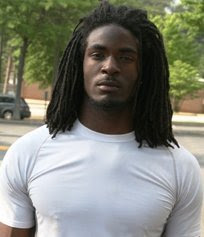 Hunker'd Down by Bernie at 8:49 AM No comments:

The gatorNation's reigning dictator captured with the Prez on their way to an arm wrestling competition... 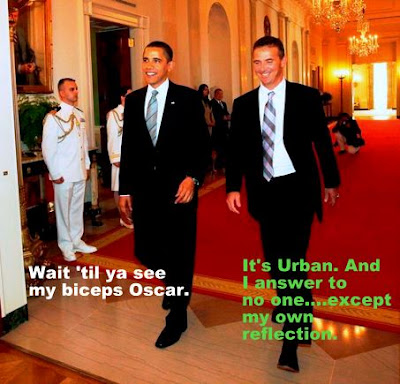 The results are a matter of nat'l security, but as they emerged from the Oval Office the Prez was overheard muttering under his breath:

Consider yourself lucky Meyer...I had to turn
Pelosi loose on Tomlin.

Hunker'd Down by Bernie at 6:53 AM No comments:

Slurban says I'm full of it. Well, more specifically he calls the Visor out.

Turns out he's happy in the swampland and my theory about his exit was completely idiotic, slanderous and full of crap. Probably why I wrote it.
The fact is that this rumor is gonna be out there until Weis is fired, replaced by another coach and the Meyers still reside in gatorsville. I admit it's illogical. He's already turned them down. floriDuh is a better program. And with the success he's had, those jorters will feed his monstrous ego until he's done with coaching or his vanity mirror surrenders, whichever comes first.
And now that I think about it, Touchdown Jesus might frown on the overly liberal use of timeouts that Meyer likes to employ.
Stay classy Urban Crier. Divided or not, the gator nation needs your leadership. Not to mention your ties to the local law and order. 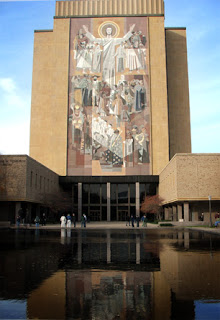 Back in the shadow of Touchdown Jesus, Obama actually had the stones to address issues like abortion during his commencement address over the weekend. Catholic crowd, largely pro-life...seems to add up to good timing.


On the plus side though, word from South Bend is the rock star Prez then actually laid hands on Coach Weis and implored him to set aside his own stimulus package - a wagon load of twinkies and Mountain Dew.

For real. Ease off the fried chicken and bon-bons big guy. Now that Corch Meyer is fully committed to his Go Gator! (wink wink...), the Golden-domers need you now more than ever.


And you Reader...you need a fork so you can stick it. Enjoy your Monday.

Hunker'd Down by Bernie at 7:24 AM No comments: