Turns out, Ohio State brought a bag of softballs to Tallahassee. 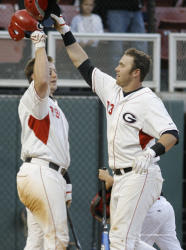 The Diamond Dawgs exploded for season highs in runs, hit and total bases on their way to 24-8 weather-delayed butt whoopin'. They'll take on the host Seminoles today at 4pm (tv ESPNU, radio 960theRef).

If you have a spare couple a hours and just love being outside in the yard...my lawn could use some attention. Preeesheeate it!

From Destin With Love...

SEC coaches were destin'd to make some headlines... 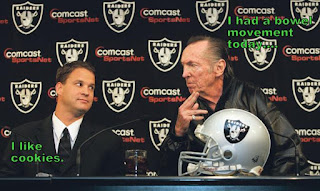 Master planner, Laney "Cookies" Kiffin showed up at the league meetings with bells on. Turns out making an ass of himself and a mockery of the program with the guts...er...idiocy to hire him was all part of a grand scheme.
I won't rehash the quotables for you, but it basically boiled down to: I make plan. Make Daddy happy.
So when the voWels are floundering in SEC East obscurity, our dear hillbillys can thank Al Davis for setting this scheme in motion. In related news, KiffyBaby also asked media members if they would like to buy some beachfront condos with indoor plumbing in Knox County.
What an oxymoron. The good news in all this is that Corch Meyer is as ornery as toddler slinging peas. Not in the cute YouTube way either. More like the I just cleaned the floor and this brat is painting it green kind of way.
If you're a parent...you get that.
Friday Feedbag 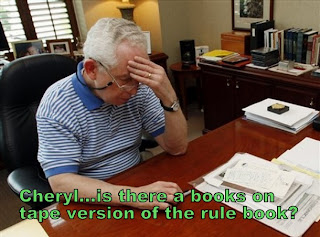 I made my usual $5 weekly donation to GA
Lottery funds last week. Since I am typing this still under the weight of a mortgage, you can surmise that I also made a donation this week.
But, as luck would have it I found a genie's lamp last weekend and my first wish was granted.
It was hard to focus through my fly eyes, but I was able to see Slive throw two empty tylenol bottles at the Mouth from tha Outhouse, yelling This is what you've done to me!!  The SEC head honcho then handed out some serious benjamins before I had to skedaddle. That reptilianTweebot lover was eyeing my perch on the wall while showing his tongue.
I sure do hope Charleston Southern School for the Blind Nuns scores a touchdown on those gators.
Oh well, better shut this down before I get pulled for another BUI. Enjoy your weekend Reader. Whether you earned it or not.
Bernie
Hunker'd Down by Bernie at 1:00 AM No comments: 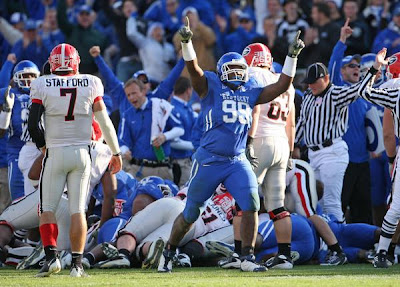 Roundtable Wednesday.
About three months ago I wrote this post recalling the round ball phenom that was Len Bias and his subsequent, premature passing. It was the height of the A-Rod saga, or at least I thought it had reached it's apex.
Since then, we've seen a couple of Dawgs suspended by Coach Richt. The reports seem to match the supposition - failed drug tests. And I was about over it, until a story broke late last week that is related...and should really have Dawg fans wondering.
Jeremy Jarmon failed a drug test. He's a stellar D-end for Kentucky; he's an even better man. Model citizen, holds one degree, working towards another, team leader, community volunteer.
Big news, right? It got even bigger when Jarmon called his own news conference to clear the air. Seems he had decided to drop some weight and visited a local GNC, purchased an OTC product and began taking it.


Jarmon said his goal in the offseason was to become leaner. He bought a dietary supplement while shopping for vitamins on the recommendation of a worker at a nutrition store, not knowing that it contained a banned substance.

Unfortunately, Jarmon skipped a crucial step: he didn't take the product to a trainer until the it was in his system. By the time he did...it was too late.
Then it got worse. Jarmon was entering his last year of eligibility. The mandatory penalty is one season.
Jarmon's collegiate career is now over.
All that to say, this guy buys something over the counter and loses what's remaining of his college career. Other players get caught with an illicit drug in their system and they lose a couple games. What Jarmon did was careless. What Figgins and Houston did was stupid. Jarmon will no longer wear Kentucky blue. Figgins and Houston will grace the field together by mid-season.
Crawford said it best in his editorial:


Yes, Jarmon made a careless mistake. It should not define him. Jarmon is one of those guys whose jersey you could be happy to let your kid wear. Still.

Something doesn't add up. There's not an ounce of me that would condone what Jarmon did. And on Saturday November 21st, I'll be real glad he's not 'tween the hedges. But the NCAA is basically saying to youngsters across the nation that it is one thing to roll a joint....but you best not visit your local GNC.
Ever.
Hunker'd Down by Bernie at 1:13 AM No comments:

Great weekend of grillin' and chillin'. If you unplugged even more than I did, here's what you may have missed.

Hunker'd Down by Bernie at 7:39 AM No comments:

Diamond Dawgs Drenched Out of Tourney 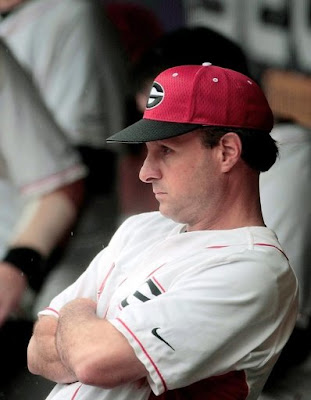 Coach David Perno's Diamond Dawgs faced LSUs murderers row of bats Saturday needing just one win to advance to the championship, but their greatest enemy was the weather. They dropped both rain shortened games and were eliminated from the tourney. Now we wait until Monday to find out our NCAA fate. My guess would be a visit to Clempson's regional.
TotalUGA write up
ABH write up
the SEC sports play by play
UPDATE: Dawgs headed to Tallahassee
to the FSU regional. Will face Ohio St.
Hunker'd Down by Bernie at 7:57 AM 2 comments: