...but I'm (officially) a man.
And at this point in my life, I can break things down into what I've seen and what I plan to.
Between what's in the rear view and what's on the road ahead, that looks like about forty things to me. I better get busy. But before I go, one more thing.
Like you Reader, I spent a lot of yesterday giving thanks for family, friends, our great country... But today I'd also like to thank everyone for reading. I've seen thousands of page views here in just over a year. Put simply, I'm humbled.
God Bless and Go Dawgs! 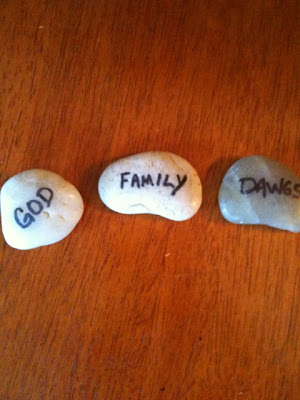 The Guys in Silver Britches

State of the BullDawg Nation
Between Thanksgiving, my birthday and the annual renewal of Clean Old-Fashioned Hate...this time of year is the ultimate trifecta for me. And for as long as I can recall, all I've ever really wished for on my birthday is to beat Georgia Tech. More years than not, that wish comes true. Last year, sadly it did not.
I'm not going to go into some YouTube temper tantrum here. But the annual clash between the Dawgs and the nerds does carry a lot of emotion for me. Jacksonville is our biggest game of the year, no question. Florida's the ugly bully on the playground you love the opportunity to smack around. But the Trade School is our brother. We work with him, share roadways with him, sometimes even the family dinner table. Beats the hell out of me why a Dawg would marry an insect, but it happens.

We've had a year to remember what it's like in this state when we lose this game. To add insult to humility, this season has been found on the map just north of shambles. We don't know which coaches will be on the road recruiting Monday no more than we know how close to the credit limit the cards in our wallet are gonna go at the shopping malls this afternoon. We've got players like Boling, questioning whether or not they can resist the urge to give up on the season.
Ahh, yes. Now I remember the feeling we all had back in late November 2000. This is ground zero. How are ya? It's been awhile. We're not too far removed from a time when the disgruntled dimwits were the upstream swimmers that stuck out like a sore thumb. Now it's the fans who scream about everything being okay, just take a deep breath who sound so out of tune.
But the truth is, I don't care. That's Monday. This is Georgia Tech. This is now. That is then.
So today I'm blowing out candles with full authority. There's no hesitation, no pause for contemplation. Beat Tech!! I'll scream in my head. Beat the ever lovin' (doggy doo) out of them.After that I'm leaving the new Dawg garb I purchased this summer in the closet and gonna go with what feels most comfortable: black wind pants and red Georgia t-shirt.
If that's what it takes to get Fabris to allow the deep kick then I may just never take them off. 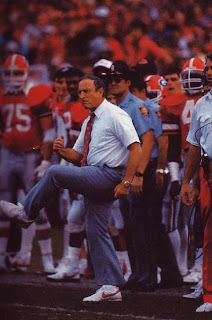 It's Georgia-Georgia Tech folks. If you've spent this season belly-aching about how horrible the team is, get over yourself. If you can't wait for the season to end, stop and smell the gridiron. Your team needs you. If you're just completely exasperated, spent, through, done, exhausted...lose the skirt Alice and man up.
There's no BCS bowl, no top 25 ranking and no New Year's Day tailgate to look forward to. It's just 60 minutes of football. Some clean old fashioned hate. A little gravy for the turkey.
Too often as fans we get caught up in worrying about the perceivable outcome of games. We're so invested in ourselves not getting surprised we'd rather just write the game off and go about our pity party. All I'm trying to say is that just won't do Reader.
Historic Mark Richt Field will be surrounded by nerds tomorrow night. Why? Because they're winning games. Otherwise, not so much.
We're Dawgs. We wear our colors and fly our flags in rain and sun, for better or for worse. Coach Richt has led his team to a 6-5 season thus far and I still gave thanks yesterday that he was our guy. We pull the upset tomorrow, we're cheering. We lose by 28, we're cheering.
We're Dawgs. And the guys in the silver britches deserve that much.
Hunker'd Down by Bernie at 7:44 AM 2 comments:

Words From the Wise

An irregular episode of ThursdaysRTrivial yesterday. With all the family, friends, turkey and dressing I figured it'd be a tall order to compete with. So I simply asked whoever had a free moment between the gobbling and the pumpkin pie to finish the sentence however they saw fit.
Tech sucks because ______________.
Two tweeters chimed in with equally awesome answers -
MikeInValdosta says Tech sucks because THEY CAN.
and
allyugadawg says Tech sucks because they lie cheat and breed terrorists of course. ; )
If you sunk into a tryptophan induced coma early and missed the fun, feel free to add your own. Ally and Mike, make sure you pick up your pin-striped short-sleeve button down and Chan Gailey autographed pocket protector.
Sorry, I wasn't able to score any photocopies of O'Leary's resume'.
Hunker'd Down by Bernie at 7:30 AM 1 comment:

From all of us here at Bernie's Dawg Blawg...

God Bless you and yours. And our heartfelt gratitude to those serving this great country.
Hunker'd Down by Bernie at 7:00 AM 4 comments:

As luck would have it, the nerds had the foresight to call ahead and ask YouTube to come down Saturday night to the flats and tape them doing that freakin' song where they jump up and down and hum along.

Should be all the more awesomer when Brandon Boykin returns the opening kick for 102. But for now I present to you...this week's locker notes: 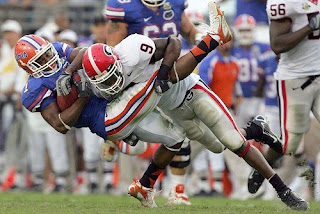 Now your turn. Just grab a Sharpie outta my pimped out stadium cup there and go to town. 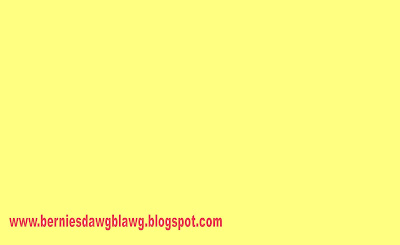 The Joke by Coke 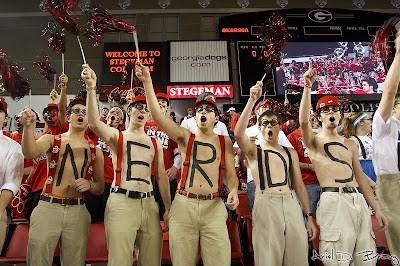 Largemouth Dawg (aka the N) rockin' some suspenders
This pic reminds me of my favorite anti-Yech joke:
Guy sees the helluva engineer billboard along the downtown connector and decides to call into the nerds' ticket office. "I was wondering if you still had four available for the game this Saturday."
Ticket attendant stammers, "Yes! Yes we do. Where would you like to sit?"
"Well, do you have four together on the 50?"
Again, "Yes! Yes we do."
"Great! So what time is the game?"
Long pause, then: "Well, sir...what time can you be here?"
Boom! Roasted!
Hunker'd Down by Bernie at 9:28 AM 4 comments: 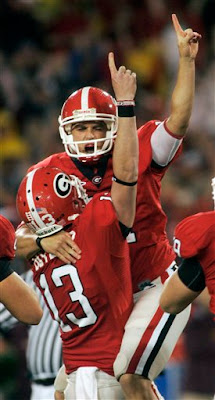 Congrats to Blair Walsh and Drew Butler! In a season of discontent, they have been the ships with anchors...the calm amidst the storm...just a coupla studs!

We have two national semi-finalists...neither of which have an actual position coach.

As that annoying song says....things that make you go hmmm...

Hunker'd Down by Bernie at 7:00 AM No comments:

Click HERE to get this week's Mumme Poll. Just remember that the results may not be released as of the time of this post.
This was the first week that I looked for an admin asst. to hand this over to. What a luxury to be able to do after a weekend that only left you in the doldrums. I didn't want to, but I balloted thru and here's what I came up with:
Top Five
Florida 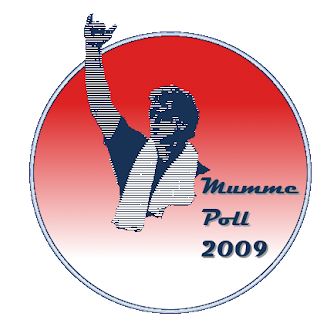 Texas
Alabama
TCU
Cincinnati
The Next Seven
Georgia Tech
Boise State
Pittsburgh
Oregon
Ohio State
Oregon State
Iowa
The Top Five is unchanged after four of those teams took an active bye week. And there weren't many changes in the Next Seven either. I was no longer compelled to argue the case for Okie State after a lackluster performance against Colorado, at home. So they fell. And LSU is too busy learning the hard way that thine clock is thine enemy to really notice that they no longer grace my ballot.
As for this week's newbies, the Beavers may be the biggest surprise. However, they arguably play in this season's toughest conference and their losses are as respectable as they can be. So the second best team in the Pac-10 is worthy.
Then there's Iowa. The Big 11 is a terrible conference this year. It consists of a couple welterweights that have feasted on several powder puffs (which is a step above cream puff). It's the Monday before Thanksgiving and you know what that means...this conference is done playing football for a month and a half.
I don't like moving a team down during an off week, but if a Clempson, VA Tech or LSU makes a statement...so be it.
Hunker'd Down by Bernie at 5:08 AM No comments:

...when the lifestyles vary so vastly. 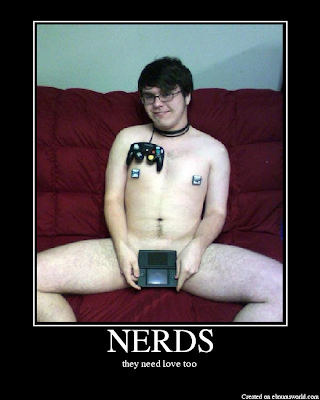 (h/t Ally)
So don't feel ashamed about a feeling that comes so natural. And no matter how much love they may need, whatever you do...resist any urge towards sympathy, clemancy, and (God forbid) compassion.
Afterall, while the Seilers grieved...they laughed.


Other readings to ready you:
Hunker'd Down by Bernie at 4:45 PM 2 comments:

Monday's Meatloaf - No Uga, No Bark

No joy in Dawgville. While I in no way feel these players are lollygagging or trying to breath through their eyelids, it is a miracle we're bowl eligible...
How'd we ever win 6?
Today's Ingredients

The best synopsis of Saturday's game comes from Get the Picture:

These coaches are so worried about preventing the worst case scenario from happening that it's affected their ability to get their players to perform up to the level of their talent.

That's just one of the Senator's thoughts from the 35. The rest are just as dead on, as usual.

There's a lot I have to say, but it's really no good. What those guys in the ingredients and in the Daily Dawg Clicks have done is much better than what I've tried to express, then deleted. I'll have my second annual State of the BullDawg Nation ready sometime this week. Should be an interesting call-in show tonight. Personally, I don't think I'll wait for Jim_from_Duluth's transcript...

Enjoy your Monday Reader. It could always be worse...we could have an insect as a mascot.

God Bless each and every player, but especially the seniors who gave their all last night. Sure, we saw some bad decisions and some costly mistakes. But I didn't see any player who wasn't giving their best effort.
As disappointed as I am in the outcome, I'm much more disappointed in the turnout. After an emotional victory against Auburn and a (very) tumultuous week, I expected a full house. It looked like a lot of students had left campus early, leaving behind their fellow student-athletes to fend off the wildcats on their own.

That hurts worse than anything. I guess it's been that kind of season.