Blogging live from Butts-Mehre! Check back throughout the day for updates on who's ink'd, videos, pics, doughnuts and who knows what else.

This is the day so many message "boreders" have fretted over, coaches have turned gray worrying about and I've used as another excuse to come to my favorite city in the whole world.

So prop your feet up, keep the F5 key within reach and let's GATA.

Some related readings while you wait on the fax machine to purr:
- Last year's journal
- Mackie weighs in on Da'Rick bashing
- Mike evaluates the muckraking at CMRs expense

5:14am Up a little earlier than usual, reading up on who's expected to sign.

5:15am quick note: if you have a question feel free to post it below. If I can't answer it, I'll either find someone who can or just fake it.

6:31 another stop at QuikTrip. They're gasoline may be guaranteed but the sanity of your stomach after one of those breakfast selections under the heat lamp, not so much. Trust me.

7:02 roll of UGA letterhead fax paper to the reader that can tell me where this pic was taken (Update: FireGuy708 is the official winner. Enjoy the paper. Guess I don't need to tell you it's flammable...) 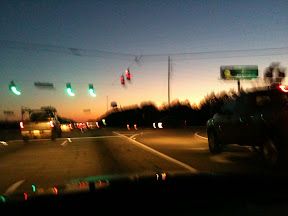 7:17 about this time last year Branden Smith was faxing in his fresh ink and fleet feet to Butts-Mehre.

7:21 maybe it's nerves...or breakfast, but stomach's singing. Thank you ZanTac.

7:24 well known NSD fact, 30 years ago Herschel was no where close to making a decision.

7:37 someone keeps stepping on the 960theRef feed. Annoying.

7:40 plenty of parking in the deck. Guess Da'Rick scared some fans off. In better news, not nearly as cold as last year.

7:45 they've got the student spaces blocked off this year. Maybe we can go w/o the threat of towing then. 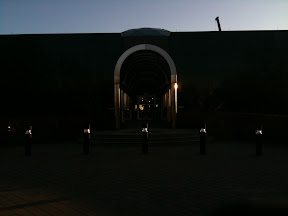 8:08 update on doughnuts: selection is better than last year...but I'm avoiding them. 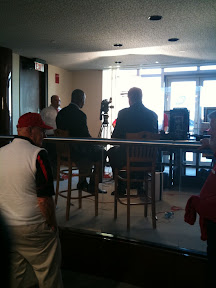 8:15 Mackie tells me to give Dowdle the rabbit ears. I treat the suggestion like the doughnut table.

8:24 Kenarious Gates gives us his signature. Word is his feet are as big as Dowdle's.

8:30 going to empty the bladder. You know, just in case Thornton does sign with us.

8:35 Chuck and Grantham talking Dawg. Then a clip of him leaving (mostly to test the video on this app). 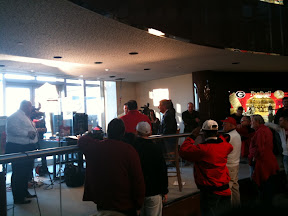 9:01 word is floriDuh's class is about done. Guess they're all on work release today.

9:02 Thorton to Penn frickin State!?! WTF? (just rumor on the BM floor) Ambles to USC. Has the hots for Layla. Boone to LSWho, big surprise.

9:03 Marc Deas is a Dawg. As is Hutson Mason. Welcome to our Nation!

9:16 Dowdle struggling with the Ogletree signings, may have committed a KiffyBaby.

9:17 Crowd cheers when director allows Chuck to say both Alec and Zander have signed. Dowdle thinks they're cheering for him.

10:03 judging from the page views some of you need to be careful the boss ain't around

10:05 Garner sitting down with Dowdle. Chances he gets asked about the departures....slim and none.

10:07 sorry about the spacing around the pics. This app definitely has some kinks. And if the videos aren't working, I'll fix that asap.

10:10 listening in on some jackhole preach about how good a job Felton was doing. R U effin' kidding me?

10:13 Jalen Fields is a Dawg with some sacks in him. Welcome aboard!

10:20 PSA: if you parked at the Kangaroo across the street, the slushee will be a lot cheaper than the towing bill.

10:25 when visiting Butts-Mehre it's really uncool to lean against the cases. Bring a chair next year lightweight.

10:36 just saw on AJC that Smith stuck with FSU. If we had been able to steal Smith and Green from Noles that woulda made my day.

10:39 ticks me off they don't have these interviews mic'd. Are Hartman donations down that much that we can't afford technology from the 50s?

10:53 I'd tell u what Coach Baker is saying about the soccer team but I can't (really) hear what he's saying. 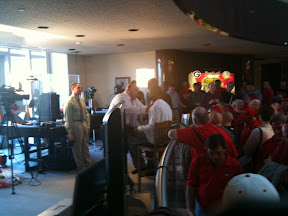 11:25 still waiting on Bobo and Richt. Crowds a little more than half capacity I would guess.


11:27 Coach Richt takes the mic (that's only there for tv) and introduces his new hires. Says Water Girl should be back to full time since Jon is getting married. Won't comment on Da'Rick for obvious reasons ( but nice try dude). Searels says Sturdivant will be ready. Bobo says QB race is in good hands and that he's excited to have Mason. CMR also says Samuel is working out as a LB.

11:35 Big Dawg makes best comment when he pleads with Grantham to bring the junkyard back. CTG says if he does he expects a bark. Crowd obliges.

CMR talking about off season and positions


4:49 After attending parent/teacher conferences for my girls I emerge to surprising details. Champ Bailey asks me how our class is shaping up (via twitter).

4:50 check some updates and looks like Christian Green (FSU) did indeed slip through our grasp as did Adrian Coxson (floriDuh). Neither were big surprises, but Green really wanted to come to Athens. Sounds like it came down to location and friends.

4:51 BUT...looks like a very lanky, athletic WR did officially sign ($$) his Georgia LOI, Lonnie Outlaw (yes, you read that right). Downside is that he will attend GMC this fall. Not Athens. He'll actually need two years there to become eligible for UGA. But when he does officially become a Dawg, Outlaw not only enters the competition for the WR rotation, but also coolest name on the team with Baccari.

4:55 I guess WR becomes the position in question with this class. I'll have a more thorough evaluation up (probably Friday) later. But I think we addressed all of our needs.

I should have a wrap-up post by Friday. Good night Reader.


- Posted using BlogPress from Bernie's iPhone
Hunker'd Down by Bernie at 6:14 AM

Is the Thornton thing confirmed, or just a rumor? Thought he wasn't announcing till around 10...

Thornton is a Dawg:

No. Thx Anon. That was a rumor that proved very untrue. I shoulda known better after last years Willie rumors on this very floor.

Not sure if you caught this or not, but Hale reported that Samuels is officially switching to LB, per Richt...

Oh I soaked up every word CMR said. I added the Samuel nugget towards the tail end.

I'd be surprised if he redshifted. He seems a natural fit. Can't wait to see him at GDay.

Bernie, you are the man!

Any other rumors on the floor about any other possible late pickups?

MT appreciate your updates and comments today. We end up with 19 LOIs, at least one of which will be bound for Milledgeville. Hopefully the others earn their eligibility.

This may be a good class instead of a great class. But they're all DAWG. And that makes them first-class with me.