A Lethal Cocktail - Michael Adams and the NCAA 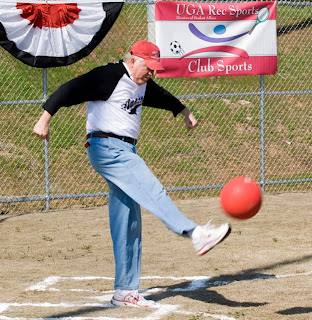 There's suddenly a great big spotlight on the large elephant in UGAs room. It's not that UGA alumni and fans have always refused to discuss the topic of Is Michael Adams the actual devil? It's more like we just prefer to pretend he's not really there. He'll come out of his North Campus hole every so often to make an ass out of someone and then he slithers away.
Unfortunately, having seen him in person I can attest to the fact that he does indeed exist.
But will he exist much longer in Athens? We've known for awhile that he's a leading candidate to replace Myles Brand as NCAA Chief Dictator. Brand left a modest legacy of academic improvements that evidently Adams would like to ruin.
That's just how he rolls....
Back in my day we had Charles Knapp as UGA President. I never saw him play kickball, but I bet he didn't kick like a girl getting ready to promote from kindergarten. No, the main criticism against Knapp was that he didn't do enough. Boy, we didn't know how good we had it back then. Adams wakes up each day to crush souls and find new and more malevolent ways to wield his massive ego. He's hated by a majority of the faculty, the only alumni that don't despise him are the ones he's wined and dined on the private jet he used to use like a Winnebago, he doesn't like cocktail parties and let's see...what else...
Oh yeh! He stabbed Coach Dooley in the back...several times...publicly.
At this point if I were to pull back the curtain the Board of Regents hides behind, I wouldn't be surprised if I found Adams there holding a gun in one hand and an unfiltered Camel in the other. The man spends cash extravagantly like there's no tomorrow then raves about the influx of donations to the University, most of which he has nothing to do with. If I were to hunker down at the foot of the arch and miraculously find a cure for cancer, this jackhole would not only take all the credit but would be sure to do so within earshot of the Action News van. 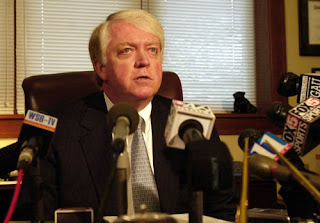 The truth is, I don't know if Prez Adams will be anointed NCAA King. It's entirely possible he's lined the right pockets and slapped the right backs. We all know that the NCAA isn't a perfect organization and that it likely never will be. Those of us in and around Athens also know Michael Adams isn't the right choice to succeed Brand. Mixing that amount of power with his stature of indignity is a lethal cocktail, pardon the pun.
But it'd be nice if all this sudden national attention would also awaken the powers that be. Maybe someone would find it within themselves to backstab the backstabber...
Some other related readings of interest: