A Mound of Problems at the Plate

The Plainsmen had 43 (FORTY-three) runners cross homeplate over the weekend at Foley Field. That's nearly two runs an inning over the span of a 27 inning SEC opener. In stark contrast, the Dawgs only managed 9 runs.
In the pre-season, no one really expected Perno's lineup to blaze any trails. The overwhelming feeling was that Perno would have to manufacture runs and the pitching staff would need to hold their own, at least until the offense found their bats. 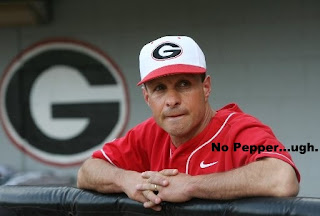 In short, it hasn't happened.

Taking a look at the schedule, there's even less reason to be optimistic. The remaining opponents read like a laundry list of perennial powerhouses. Here's Brian Foley's Sunday Thoughts:


What has happened with the Georgia Bulldogs? They were absolutely blitzed by the Auburn Tigers over this weekend by a combined score of 43-9 over the three games. The Bulldogs pitching staff now has a team ERA of 8.22. Their three weekend starters in Matt Grimm (1-2, 5.16 ERA), Michael Palazzone (3-2, 9.15 ERA) and Jeff Walters (0-2, 9.58 ERA) have all struggled mightily during the early portion of the schedule. If the Bulldogs do not get the pitching together, they will not be in the postseason at all.


We're not a good baseball team on any front...we don't defend, we don't pitch and we can't hit.

But perhaps Quinton put it best:


To reinforce the point, Auburn is #29 in this week's Collegiate Baseball poll. They aren't in nor are they receiving votes in any of the other polls. We just got destroyed by them. Left on the schedule: #4 LSU in Baton Rouge, #6 Clemson, #8 Florida in Gainesville, #17 Ole Miss, #18 South Carolina, #20 Arkansas in Fayetteville, and #23 Vanderbilt in Nashville. Plus #5 Tech a couple more times. If Auburn got 43 in Athens, what could a really good team do?

We're young and we're hurt, but I doubt the team would make it to Hoover with everybody healthy. Take your lumps, learn from it, recruit, and evaluate the assistants at the end of the year. This season is done, folks.

Ouch. Yet very, very true. At this rate Perno's team is steering well south of .500 and heading right towards some tough decisions.

Email ThisBlogThis!Share to TwitterShare to FacebookShare to Pinterest
Dawg Tags: DiamondDawgs, this rotgut moonshine is making me sick