Quarterback controversies are sometimes viewed like the plague in football. Avoid them at all coasts. They can bring a team to its knees. Render it rudderless in a tumultuous sea.


On the other hand they can be welcomed with open arms. Competition can breed success. Let the players push each other to new and higher plateaus. And let the best man win the snaps. 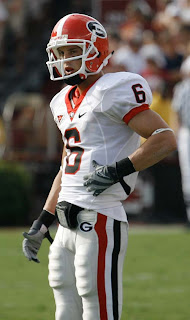 By August's two-a-days some (maybe all) of this will certainly be behind us, but right now...there are three QBs in Athens who are all at a crossroads. (I omit newcomer Hutson Mason because 1. he's not in Athens yet and 2. the impact of the recent south GA arrest has yet to register in his zip code) The performances on the practice field, weight room, film room, class room, downtown, on their mopeds, in the dining hall, at the movie theater, on the phone with their mom...you get the point. Their actions 24/7 for the next couple weeks especially could shape their career as Dawgs like no other.


Logan Gray
Often the forgotten man in the backfield, most fans (including myself at times) have relegated him to eternal backup duty and/or a position change. While you have to admire the kid's stickttoittiveness, when the head coach sticks you out on the field to wave your hand to the point that it becomes a bad joke before a bad dream...well, it's not a good sign.


Still the Mettenberger arrest leaves Coach Bobo with one less signal caller for at least one game. Gray is needed in that huddle. He is wanted in that huddle. If he is ever to prove he's ready mentally and physically to take the reins...that time is now. Aaron Murray
Nice piece today from Hale on Murray's boring spring break. It's been widely believed, even before Mett's arrest that the starting QB job at the University of Georgia was Murray's to lose. Personally, I've been looking forward to this kid under center 'tween the hedges ever since he came back from a devastating leg injury to lead his team to a state championship.


I won't try and speak for you, but as I've read the recent stories from Butts-Mehre I can't help but think that Murray is now being interviewed for the starting job through the media. Richt and Bobo know what he can do on the field. They've known that for some time. And sure, the kid's had a microphone in front of his nose before. But now there is at least the appearance that he's the guy. (I mean, we're already talking about the dude's glove.) He can put the team on his back with his helmet on, can he keep the team balanced and in order while being quoted for tomorrow's print?


Murray's a winner. And I know for a fact he wants the job. And we're all pretty sure he has the skills to win in the SEC. The only thing to keep him from proving it, might just be a feeling of complacency after his supposed main competition was forced to hand over his unfactual IDs in Remerton. 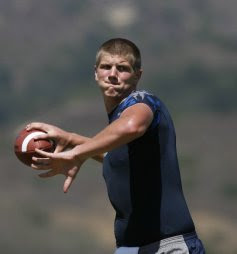 Zach Mettenberger
The man of the hour...Athens' own McLovin...the personality under the red and black microscope. I had no sooner read that the redshirt freshman from Watkinsville was closer to the starting job than people believed, than I was also reading he had a brain fart in south Georgia.


Mett's crossroads off the field couldn't have any clearer road signs: stay sober (and/or out from under the streetlights). On the field though, not as clear. Sure, he can use the experience to channel his inner David Greene and prove to be a redshirt wonder. But even if he wrestles away the all important August snaps from Gray and Murray, he has at least one game to watch from the sideline.


Can you imagine the feeling of winning the porsche, handing over the keys to your buddy just for a joy ride around the block...only to never hold the keys again? That scenario might not play out with Mett sitting during the home opener against UL-L. But if he earns the position as starter and the suspension goes to two games only to see a backup QB grab a dramatic win in Columbia...well, then we have ourselves a full bore QB controversy.


And regardless, it's always better to have one of those in the spring than the fall.

Keep spinning about your favorite great for QB and you screw us out of a great QB. Several of you writers appear to be trying to make a bet come true.

Zach made a mistake and he has to pay for it, not you or any of the rest of us fans will pay for it. 10% of 12 games is 1.2 therefore the automatic NCAA # is 1 game suspension. Let's say that Mett is the best QB as determined by the coaches and let's say that Richt waits until deciding the QB before meting out the punisment. Richt can select any game (although I think that I read that he had mentioned the first game)and what's to stop him from letting him play and he beats the heck out of everyone only to have to sit on the bench for the Tech game. What kind of ignominy would that be? No one thinks of an unkind use of the suspension rules, but if it were me and Zach wins in Spring Practice, I'd sit his butt for that game. It would haunt him and scare the heck out of any other player who thinks that getting lax enables them to forget the team as a whole concerning individual actions. But if you think that his faux pas means he shouldn't assume he is to be the chosen one, then that thought does a disservice to the team. Why should he compete and stop pushing the other QBs to be the best that they can be. That is what should happen-he should continue in good stead to win the QB spot-WITH ALLL THE FAN'S BLESSINGS.

Why don't you writers research the entire incident about Zach and find out the particulars before you knee-jerk and push his head in the sand? You could do the team and fans a great service. And another thing-Logan shouldn't be treated as an afterthought in your words. What if he wins this competition? You may try to convince us that you have an "in",but I'll believe what Richt states to the press and that is that this competition is ON! Leave it alone and write all you want when he and our staff decides who is to be our QB. You should tout them all because they have already ALL been deemed capable of running this team. Spraying a few words around to qualify your comments for your candidate as THE one won't do. Write separate columns of each one as to experience and what advantage each gives to the position, then get back to us with information that we can digest. Your efforts to inform us are welcome. Your efforts to guide us aren't.

I realize this won't get past your Second Amendment rights, but what the heck, you will have read it anyway.

Either I'm misreading your comment or you've misread my post. In the event that it's the latter...the intent of this post (and most all of my posts) is to express thoughts, generate discussion. I have no ulterior motive. If you read here often you'll see that I endorse practically every decision CMR makes. If he announces that Trinton Sturdivant will start at QB I will be second in line behind the decision.

Well, that's pretty silly, but you get my point.

Like I typed right after the arrest, Zach did something most all of us have done. Regardless, I can't get any further into Mett's corner. He's a Dawg. Just so happens I am too.

I don't know anyone that reads more about UGA Athletics than I do. As I read up on the QB situation this week, it dawned on me how important this point in time is for all three. The post was designed to point that out. Nothing more.

But what really befuddles me Cojones is that you would think I would use the Second Amendment to deny your valued comment it's deserving space. That qualification is reserved for comments that are unreasonably profane. I don't mind disagreement whatsoever. And I always welcome your comment.