Deion Sanders has a new orifice to BlahBlahBlah from...

I'm sure most Dawg fans will find the following quote from former voWel Eric Berry petty and childish. I on the other hand, found it hysterical.


Another message Berry finds dear to his heart is making sure he treats the fans well. He acknowledged still feeling upset when Deion Sanders declined to give him an autograph when he was in high school (and wasn’t interested in speaking to Deion at the Play 60 event), and said he wants to be as accommodating as possible to fans.

"I just try to make sure that if someone comes up to me, whether it’s for an autograph or a handshake — because I’ve been shot down before like I told you — I don’t want nobody to feel like that.”

Let me add, I can't stand Deion. The only thing worthwhile he's ever done for society in my eyes is to dump ice water on Tim McCarver. 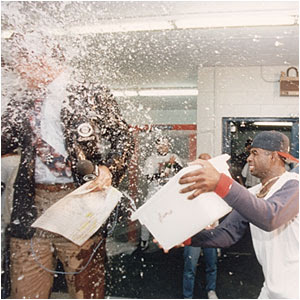 Now we can all agree, THAT was funny!
But the bottomline is that Sanders epitomizes a part of pro sports that makes me ill. The prancing, the showboating, the ego crammed inside a helmet that will never be big enough. To me, all that just takes away from the actual game. (I know...I'm old. I get your point...so get off my lawn!!!)
I've read where Sanders was like that in college too, but I come from an era where only relevant college football teams made the television screen. And the Criminoles were hardly relevant back then. Boom Roasted!!
Anyway, my disgust for PrimeTime only strengthened as he continued to get credit for being flashy through his years in the NFL. To my knowledge, Champ Bailey hasn't ever landed in a helicopter in centerfield of Atlanta Fulton Co. Stadium, but he also doesn't pull out a red cape when a ball carrier comes to his side of the field.
He takes the mutha to the turf, Dawg!
So while I detest the fact that Berry shunned Georgia back when he was a senior at Creekside HS in Fairburn, I applaud him for giving Neion Deion a small taste of his backhand.
Hunker'd Down by Bernie at 1:44 PM

I'm a UGA homer, but your crack on FSU was silly. FSU went 32-4 during Deion's reign in Tallahassee. They won three New Year's Day Bowls to boot.

Sure, it was silly. And probably just a careless cheap shot because I don't like FSU. But I stand by my comment that they weren't really relevant...as most independents weren't relevant. Their record during Sanders time there was much better than Georgia. But hell, that's what you get when you play a schedule full of nobodys with a Miami, Nebraska and floriDuh thrown in for good measure.

Dawgs lost more in late 80s, but registered higher on the relevance meter.

Ok...I decided to go check. FSU finished in the top five Deion's last two seasons. So they were obviously relevant. I was led astray by my lack of exposure to independent televised football during that time.

We can all agree the McCarver ice-bath was great.

I certainly prefer the Champ Bailey persona to "Prime-Time." I also don't like kids playing on my lawn, unless invited.