UPDATE: As Mike (Twitter) and Furban8 (comments) mentioned, Polee will visit Oregon before deciding. The Ducks have evidently settled on Dana Altman as their coach and he's hot for Polee too. If you're on Scout, Fletcher Page has been right about a lot with this kid (including the likelihood that he would delay his decision), which isn't an easy task. Especially since this kid's recruitment changes as quickly as his first step off the hardwood. So stay tuned. We may be labeled a longshot, but we're a longshot that has recruited him extremely hard, well.

_________________________
Dwayne Polee is set to make his decision tonight. This is the guy that Coach Mark Fox has recruited the hardest, racking up frequent flyer miles by the thousands between ATL and LAX. 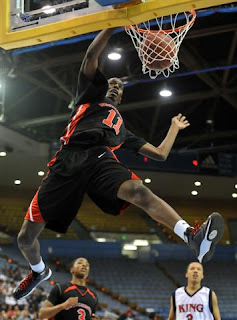 The number of schools still in contention is still a little vague. Polee dropped UTEP, which is the program I once considered Fox's greatest challenge. Floyd began recruiting Polee when he was still writing checks at USC. Now it is down to UGA, St. John's, UNLV and Oregon.
Unless...you believe this post at ZagsBlog.

Steve Lavin is a hell of a recruiter and was out visiting Polee as recently as Wednesday I believe. But he's also the last guy to the table and Fox has made no mistakes with the Polee family, who have gone on record effusing praise upon Fox, Athens and the UGA basketball program overall.
Can Mark Fox grab a high profile recruit such as Polee from the left coast in just his second season?
Regardless, it seems as though Polee is heading east. It's just a matter of where. The game tonight starts at 6:30pm out west. So I'm thinking we'll know something around the time I'm on my fourth bourbon.
Go Dawgs!
Hunker'd Down by Bernie at 2:02 PM

I hope you are using a small glass. I can't wait to find out where Polee plays!

MMM bourbon. I don't keep up with basketball recruiting that much but does seem like this would be a major sign that Fox is going to be able to compete in recruiting for the guys we need to bring the program to the top. With what he has shown in his ability to coach guys up if he can bring in talent then the future looks very bright. Let's hope that Fox doesn't have his eyes set on moving to a "basketball school".

Looks like you are going to abstain from Bourbon for quite some time.

Per the LA Times, Polee is delaying his commitment after speaking with the new Oregon coach earlier in the day.

Would love to have him at UGA but its almost like he's searching for a reason, any reason not to come here.

I'm just imagining us making the tourney next year and becoming a fun-to-watch fan favorite with Polee and Leslie making high flying dunks. I really believe it could change the dynamic of UGA roundball under coach Fox. But he's got to come HERE please!

Thanks for the updates guys. Just got in from dinner with friends. I guess the news could be worse.

But regardless of who this kid chooses, Dawgfan17 is right. Fox has righted the ship. It'd be HUGE if we could land Thornton from our on backyard. It'd be monumental if we could get this kid from LA in Fox's second year.

I'll keep my fingers crossed. But as with any type of recruitment news, I'm not holding my breath.