I used to absorb everything Tony Barnhart spewed forth. And I still feel like he's one of the best writers of college football in the Southeast. But perhaps he should stick to books. 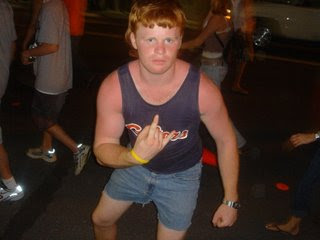 Mistuh College Football has released his projections for the upcoming season (Georgia predicted to finish 2nd, fwiw). And evidently it's not too early to predict the gayturds numero uno...and that Slurban slithers to the finish line.
Go read it yourself. But here's what struck me as funny:

Okay. Was the gator offense good last season? In a word, yes. Most definitely. But it amazes me how quickly pundits forget how much the unit struggled. After devouring their usual cupcakes in '09, floriDuh's offense did little to claim victories over Tennessee, LSU, Arkansas and Missy State.
Perhaps Barnhart is predicting that with Tebow gone new offensive coordinator Addazio will be settled in more. At times last season, the offense had zero rhythm and even less bite.
But for Corch's team to repeat as SEC East champs, that offense is gonna have to hit the ground running and do its part to account for all of the off season losses, which were mostly on the defensive side of the ball. John Brantley might have an NFL arm...but something tells me it's not going to be the one charged with eye-gouging the SEC ball carriers this fall.

Florida is the safe pick (and therefore TB's) until they play their first SEC game. After that the prognosticators will either jump off the bandwagon or further up Urban Meyer's behind.

Similarly, UGA will remain beatable until we beat someone of note.

The sport reporting folks rarely go out on a limb...

I'll simply add that largely, media today just throw crap out there to get clicks. I guess the older I get the more frustrated I get with that.