Somewhat inspired by this post by PWD as well as Hale's update on the Georgia Theater rebuilding, here's a beer review. A very amateur beer review. 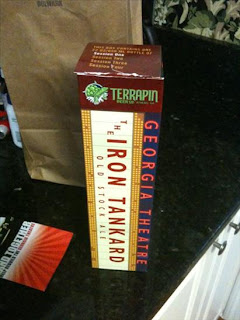 I've always been known as the cheap beer guy, aka beer whore. But lately I've been making an effort to enjoy some higher quality brews. My hands down favorite so far is Sweetwater's Dank Tank. But the last time I was at my alcohol dealer, he was out. Perhaps seeing the look of desperation on my face, he quickly suggested a new beer by Terrapin.

So far they've only released the first session The Iron Tankard with Session Two scheduled to be on shelves soon. The Iron Tankard was a very flavorful brew with more malt than hops. I thought it was just good at first, but it definitely got better the more it sat in my glass. Although it didn't sit there long. I expect I will like Session Two, a belgian dubbel entitled Double Feature even more.


All brews are 22oz bottles in a decorative and historical box. The first session was over 9% ABV, so your enjoyment should be greatly enhanced. And one box in each production contains a golden ticket that allows the beer drinker a lifetime pass to the renovated Georgia Theater. So tell Willy Wonka to shove his chocolate, and grab a Terrapin Georgia Theater Session.
Hunker'd Down by Bernie at 5:22 AM

Is this sold all over the state?

If you like a real "hoppy" beer I would highly recommend Dale's Pale Ale. Great stuff and it is sold only in cans so it is great for tailgating! I think it tastes even better when poured into a glass though.

I'm sure it is a limited availability type thing with most of the production spreading over Athens Area. So if your local watering shed doesn't carry it but does carry Terrapin, just mentioning it may get it on the truck.

I haven't had Dale's, but I'll try it since you've given it a rec. I had Dogfish Head 90 Minute IPA a couple weeks ago based on Hamp's recommendation and it (like the Dank Tank) deserves a post all on it's own.

Thanks for the inspiration Bernie.
http://fourboysbrewpub.blogspot.com/2010/05/rye-pale-ale-terrapin-beer-co.html

Hey...if you need inspiration to drink beer...I'm there for ya.