Yesterday we looked at the idea that this is now Coach Richt's football program. Today let's look at recruiting.
The Class of 2011 in the state of Georgia is gonna be a ripe peach. And Coach Richt's staff is doing what they can to make sure that peach comes off the limb red and black. 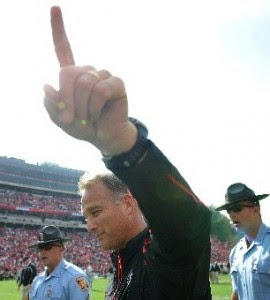 I remember when Richt was being introduced as the newest head coach at UGA and the emphasis he placed on recruiting. Afterall, he was coming from a school that consistently kicked our tails in recruiting the top kids from the state of Georgia. Richt said we could win championships with the talent within the borders. And that's the renewed emphasis being added this recruiting season.
Talent like Damian Swann, Nic Marshall, Jay Rome, James Vaughters...just to name a few...exactly the type of talent the head guy was referring to back in '01. To grab a few more of these home grown players would make the '11 class a truly special one.

And that seems to be what CMR and staff are targeting. As many as seven coaches in red and black have been reported to make visits to the state's top players recently. At least until the practice was outlawed.

Sending coaches out in large teams to blue-chippers' schools sends a definitive statement...We want you in Athens. And the results are already positive for kids in the state of Georgia that can play some football at the level of the SEC.


Of Georgia's seven 2011 commitments, only North Carolina quarterback Christian LeMay is not from Georgia.

The most immediate impact to this renewed vigor on the trails could obviously be on the defensive side of the ball. Grantham's NFL experience coupled with the chance to compete early will hopefully reverse an ugly trend, a serious drought; a drought that has had Georgia fans thirsty since David Pollack and Thomas Davis left in 2005. 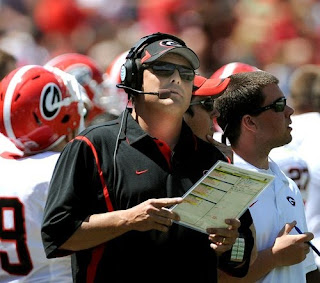 There were 15 players, including three first-round NFL draft picks, from Georgia high schools who were picked in the NFL draft last month, according to Maxpreps.com, but only Rennie Curran (third round) and Reshad Jones (fifth round) played for Georgia.

I won't pretend to know what has happened to recruiting overall the last few years. But on the defensive side the results on National Signing Day were much like those on Saturdays in the fall - some highlights mixed in with a lot of questions. Perhaps after a run of SEC Championship games the staff became too complacent. Maybe their approach was like my golf game...off the green.

Regardless, these days things seem different. Results should hopefully follow. And with any luck, Richt and staff will take Legge's advice...and start piecing together the top class in the nation by simply stating it as the ambition.


It is a bold goal, and one that is subjective anyway, but it would show players that Georgia isn’t scared to be the front runner – a program on the rise.

Indeed. A program on the rise at the start of a new era.
Hunker'd Down by Bernie at 5:13 AM