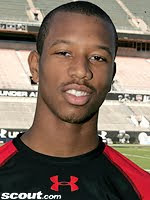 Chip Towers is reporting that UGA recruit Christian LeMay received a 30 day suspension for a violation of school rules at the end of the school year. The kid's father Stacy LeMay says they plan to appeal the ruling and insists the eventual outcome will not impact his son's ability to enroll at UGA and play for the Bulldogs.


If the suspension is upheld, it appears LeMay would enroll in a private school rather than spend the first 30 days of the school year (and subsequently miss the start of the football season) in a Charlotte-Mecklenburg alternative school.

Butler HS is preparing to defend their state title and must do so without their all-star QB as he is not allowed to practice with the team. I won't pretend to know all of the details or be privy to the ins and outs of CMS disciplinary policy. But the facts are that LeMay received the maximum possible discipline for his infraction and he has never (ever) been in trouble before.

Like a plot twist taken straight from a Friday Night Lights' script...the pressure on the disciplinary committee will be (and likely has been) intense to show leniency on a star that is burning bright for the community. Or else, lose him to another school.
Hunker'd Down by Bernie at 10:00 AM

So instead of taking responsibility (we already know he admitted wrongdoing) & accepting his punishment his parents agree to move him to another school so he can play ball?

I hear he was getting a shot of leg on school property. No boy his age can turn that down. I think the nature of the wrong doing has to be considered, whatever that might be. Yes fair and consistent punishment is important. However, the impact on that young mans (or any young persons)life and opportunities thereof must be considered as well.

School committees feel pressure, but it isn't to cut an athlete some slack. To the contrary, it is to show how even handed and tough they are. Zero tolerance sounds tough, but it also requires zero thinking. More likely he got hit like anyone else who had a similar charge. I have little respect for the way public schools handle this because politics - as opposed to common sense - too often rules the day. I have represented too many kids in school hearings to think this is any different. Imo, he would be better off in a private school, and I wouldn't be at all concerned about it as a fan.

Charlotte-Mecklenburg County School System has ruled that Christian LeMay cannot attend any Summer Workouts with his team. He also must miss 8 regular season games through Mid-October, more than half the season, Suspended. Any appeal cannot be heard until late August, and he has no hope of his suspension being removed. No, preacher, he didn’t beat anyone up, nor have a weapon or drugs – he had sex on school grounds in front of the Principal of said school, Butler. As for how you determine that does not affect his commitment to UGA, there are 2 fronts, 1st and foremost, Christian said if nothing changes – which is not a commitment and 2nd his offense is exactly the same as Michael Grant’s offense, and UGA Admissions wouldn’t allow Michael Grant in. How can they now allow Christian LeMay in ? Because he is the # 1 QB in the nation according to Sporting News ? Michael Grant, was and is a very good football player, too.

We also learned over night that besides our Athletics Director being run out of town on a rail for disgracing The University of Georgia, the Athletics Department, his entire family, but not the football recruits - that the Magistrate Judge has moved forward with the charges against Jordan Lawrence Love, DOB 12/31/1990, whom the Judge said yesterday would not provide his full name, nor his Date of Birth. This is not a Police State, but those are the 2 items everyone MUST provide. His sister and mom can say all they want, he was obstructing the officer in his performance of his duties. Let’s also be very clear about this, it was the day AFTER the 4th of July, he did have fireworks on his person, he did have a lighter on his person, and he was the 1 shooting off the fireworks. But, he is either too stupid to know his own damn birthday and middle name, or taught by his mom to ignore his middle name because it is in fact his father’s name and she does not want to associate with the child’s father, and taught to be uncooperative in an investigation which would have been dropped onsite by providing his middle name you and I both know he knows and his birthday, you and I both know he knows.

Anonymous: Question-if Jordan Love intended to obstruct the law, then why did he stick around to speak to the officer? The other guys around him fled but he stuck around to take responsibility. Curious about your thoughts.

he had sex on school grounds in front of the Principal of said school, Butler.

I'm curious to know how you're privy to such information. Who has come forward and admitted this to be the case? Did the Principal video it? All I've heard is speculation.

@Ollllddude I'm all for zero tolerance when it comes to what it was designed for - weapons on school grounds. But you're right, too many times the gray areas in cases get passed over. Overall though, I cut most school districts some slack as they are overrun with classrooms that are being required to raise (read: provide moral stature, ethics, define right and wrong) and educate the kids. Tall order.

But corrupt school boards and principal's eye witness (WTF??) aside, LeMay did something wrong on school grounds. If other students have been given the same discipline for the same infraction, he's got little ground to stand on. If he's being treated differently in any way, then I think his dad is showing as much composure as possible.