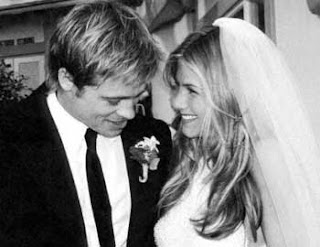 Back in the summer of 1997 if you had asked me the over/under on years a married man could go before finding out his wife could speak enough Japanese to at least introduce herself in a Tokyo sushi bar, I would've gone with 2...maybe 3.

Me...I went a weekend shy of 13 years. If only I would have taken my bachelor party on the road to Vegas and laid down a benjamin on the over...well, I'd probably have enough to buy the lady dinner tonight. Or a nice pair of CZ earrings. Maybe a screwtop bottle of wine.

But if that's the biggest skeleton to come out of Mrs. Bernie's spacious walk-in closet...well, I'm doing alright. After all, I've outlasted Brad Pitt (twice!!) and a dude named Jesse James. I've got two daughters that are beautiful despite my face for radio and intelligent despite...but I digress.

And perhaps most importantly, my Lucky Lady 13 not only accepts my fervent barking but often drowns me out. She can differentiate between zone and man coverages and understands why gators suck so awfully bad. A loss of yards is never acceptable and I love to hear her scream Hold onto the ball!!! whenever a Dawg crosses the line of scrimmage in search of more yards.

She's from Virginia, but she's both a lover and a fighter. I dig her and for some reason she digs me. 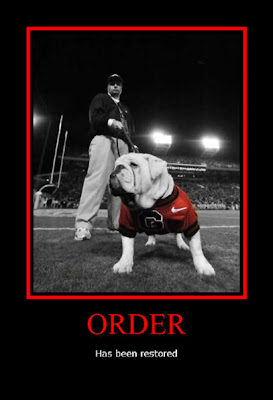 Since I take interviews very seriously, I don't want tomorrow's post to be watered down with a lot of drawn out goodbyes and unnecessary histrionics. So I'll use this end of the meatloaf to bid farewell to Hale the Rockstar. He's leaving Athens this week to go to PhilDELFya. My parents took me there when I was a youngster. I remember gathering around the Liberty Bell and some kid ralphed what looked to be cream corn all over and around the historic symbol.

I'd like to draw on that memory as a parallel to how I feel about his decision to leave. But no real ill feelings. In fact, it should be quite the contrary. Hale has set the bar high for his colleagues as well as his successor.

Yes, like a good comedian Hale has left his readers wanting more. He made blogging about UGA Athletics easier, just as he made being a UGA fan a truly knowledgeable endeavor. Despite the refinement (ahem!) that you experience here daily Reader, it hasn't always been easy. I'm only two years into this gig, but Hale's blog (and more specifically his coverage) has been a vital resource and an essential stop for all things inside Butts-Mehre.

To be honest, there are days when I just want the news from the sunny side of the hedges. But most days, the truth is what we really need. David Hale always provided the story first and foremost. But as a sports fan himself, he also recognized that Dawg fans wanted more than the daily report and occasional feature. And it is for that reason that I will miss that yankee doodle dandy.

Farewell Hale! You are at liberty to make a run for the border. But you're always welcome at my Festivus table.

You are too Reader. But please pass the mashed taters. I think I've worked up a shokuyoku.

You do realize you kinda raised the bar for the rest of us. My wife reads this blog and now I have to hear how "sweet" that was. ;-) I said honey "the guy is a journalist and I barely made it to that side of campus." But congrats on the special day! Good stuff.

Strength and Conditioning is a vital part of blogging. You have to get the bar off your chest everyday. And it also helps me catch up to the coverage I out-kicked 13 years ago. Yeh, it's a daily grind, but the alternative is scary.

Tell the wife I appreciate the clicks, then get out there and hit the stadium steps!

Kioko digs you too! And it doesn't hurt that you can cook:)