I was halfway towards writing a post about Smart Football's "6-3 deep post" yesterday when I realized it had already been done...and better. Reminded me that the first rule of Georgia football blogging is to always check with the Senator first. 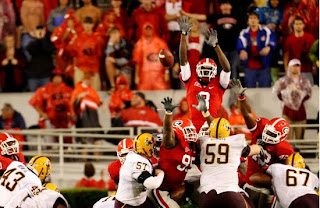 But I will add that the weapons that Coach Bobo (and more directly Aaron Murray) has at his disposal is exciting. AJ Green lining up wide on Orson Charles' side and letting them work their magic on the opposing safety will produce results. The same goes for Aron White when he's on the field. Figgins too. And Lynch had a TD in yesterday's scrimmage on top of a good spring.

Of course, Charles creates the matchups that make readers of Chris' piece on the 6-3 post drool. But the point is that AJ is the type of athlete that makes the entire team better. (I almost typed offense in place of team, but remember AJs favorite all time play is on special teams when he blocked that Sun Devils' kick) He's just that type of player who's gonna make it easier on whatever 10 other players are on the field.

Most notably, the quarterback.

Without a doubt, AJ Green is a phenomenal athlete, and makes the team better. As a freshman, redshirt or not, I know it must be easier knowing he is there.

CMR has been saying that for a while. In video of practice he said it and then added, you know it just doesn't seem fair (to the other team). AJ is great and we need to enjoy him this year since he will be going pro. Maybe the NFL will shoot itself in the foot and lock out the players next year and AJ will comeback to us for his senior year, well a guy can dream.

UGA69Dawg...I share your same thoughts on that. Although it would be a very bad day for football as a whole if the NFL has a lockout next season, that very well could play into UGA's hand. It very well could send our top player back for another season.

But that's a long way away and you're right...we need to soak up as much of AJ "The Real Deal" Green as we can this year.

So with that a toast! Here's to the 2010 edition of the Bulldog Nation! Work hard, walk tall with the knowledge you've put in all the necessary work and preparation...and then some, and then leave it ALL on the field! If you do that then we all will hold this years squad high on our shoulders come season's end! CHEERS! GO DAWGS!!!!