A wise man once told me that when it comes to flying a plane, you always want your number of landings to equal the number of takeoffs. Read this tweet from Weiszer last night and it reminded me of that sage advice.


So...I got to thinking...who would I rather have back there? First of all, I pulled their stats, if there were any. 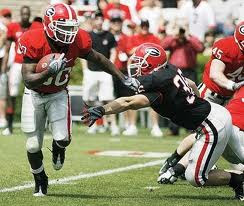 A punt returner reminds me of an airplane trying to soar in airspace that happens to have up to 11 heat seeking missiles directed towards it. I don't mind putting an expensive learjet back there as long as it's not also being counted on to fly the team on the next road trip.


So AJ may be the most intriguing option back there, but do I really trust some cock not to accidentally miss a fair catch signal and send the 2010 Heisman Trophy winner to Ron Courson's caring hands? For that matter, the same goes for Branden Smith who is (in my opinion) the most lethal option listed.


In my opinion, Thomas may be the best option, all things considered. He's shown that he has the moves and I like the idea of him in open space. As I picture him returning punts I picture a smaller version of Thomas Flowers. Despite his size he's strong enough to shed some tackles as well as make that one extra move that can be the difference in a 7 yard return and momentum shifting TD.


But in the end I'll be satisfied with whoever returns punts as long as they aren't just there to wave their hands like they just don't care.