Monday's Meatloaf - Not Just a Chance

Yesterday was Chance Veazey's birthday. I mention that because I've been thinking about him a lot this last week. Most of you will undoubtedly remember that nearly a year ago Chance was in an accident that left him paralyzed from the waist down. 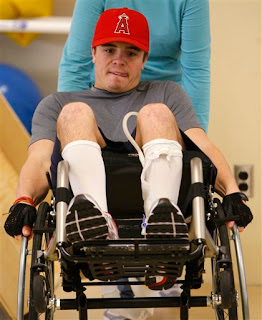 As a kid my dad had a friend named Danny. One day Danny dove into the local swimming hole (this was back before there were 3.2 pools every 5 square miles and if you wanted to cool off on a summer's day you found the nearest stream or pond). When all the water and the consequences settled, Danny was completely paralyzed.
As a kid my dad would take me back to his hometown in Blackville, SC a couple times a year. We'd take our sticks and he'd teach me about the game and life in general as we walked the 9 hole course twice. And afterwards we'd always stop by Danny's house to see how he was doing, visit a bit. His nurse would bring me something cold to drink and I would listen to my dad and his friend swap stories. Danny would catch dad up on their other friends from nearby and Dad would catch him up on what we were up to in Athens.
I'd met people with handicaps before. But meeting Danny for the first time was both terrifying and awe-inspiring. I was terrified that this could happen to someone; I was awestruck by how much my dad's friend was able to do without his body to help. Driving away my dad told me Danny's doctors never expected him to live much past his 25th birthday. This was back in the early 80s. Danny passed away last week.
Instead of giving in to a freak accident and accepting his doctors' prognosis, Danny had outlived most of them. That's why I'll never pity someone like Chance Veazey. I'll just stand back and ready myself to be inspired by them. I'll keep plodding along and one day be reminded that I take way too much for granted.
And I'll always have my dad's friend first and foremost to thank for that. RIP Danny.
Today's Ingredients 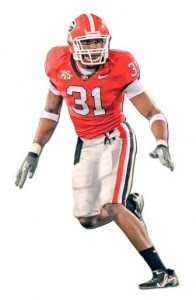 As the owner of this prestigious blogspot, I often climb up on my high horse and tell people they just need to take a long look in the mirror. It's just my way of saying they let things get out of perspective and the sonsabitches need to resize their britches. And a little self-actualization can go a long ways these days in Gayturdsville. So let me grab the reigns on this one and see what I can do.

First, Emmit Smith...you're upset that the ol' Ball Coach didn't invite you to sit on his lap back in 1989 (lemme emphasize that again NINETEEN EIGHTY-NINE!!!) and beg you to stay and play tackle football in the swamp another year, all while spoon feeding you bubblegum ice cream. You've let it grow into a hatred for all things gaytor by refusing an invite when FU had the audacity to put you into their Ring of disHonor.
Second, actual Gayturds...you're upset that Smith didn't do the Tebow Chomp at the Hall of Fame podium in Canton. You're feeling like that rejected 15 year old all over again who's stuck at home with six pairs of old jeans that are 3 sizes too small and a pair of scissors. You're wishing you could go and dance with Ms. Shy and Shameful Andrews herself. Yet there you are...playing pin the mullet on the redneck at your own pity party.
Third, Emmitt gives a Tweetapology. It was as empty as the space between Erin's ears. Wow, all of yous...self-loathe much? Then again, what do we expect from Mr. Smith and the Swamp Things?
Here's your fork Reader. Have some lunch and then go do the world a favor and smack a gator in the mouth.
Bernie
Hunker'd Down by Bernie at 5:15 AM

"Have some lunch and then go do the world a favor and smack a gator in the mouth."

A mantra we can all live with...