Trivial Update - Houston Has No Problem 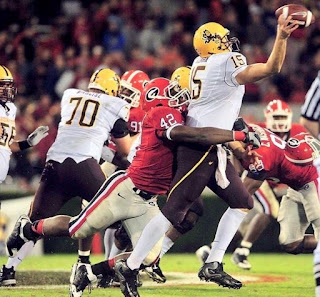 #ThursdaysRTrivial episode 54 is coming up right after this PSA: Les Miles is the smartest man under his own cap.


#ThursdaysRTrivial episode 54 "Sack'd Out" It's the weekly Twitter Twivia Show that both brings the pressure and lays the wood. Deal. With. That. REPLY back your answer for a chance at a fabulous prize. Who is the SECs returning sack leader and how many did he have last season?

One of the intriguing things I hope to learn early in the upcoming season is how this new defense will free up playmakers on that side of the ball. What was so frustrating under the previous management was that we always thought we had guys that could make the plays, but they rarely seemed to do it. Reshad Jones should have left Athens with hours of highlights in my mind, yet...no...

And that's why I liked this piece by Weiszer on the role of Justin Houston this season as compared to Demarcus Ware in Dallas. Maybe he's just one of many players that stands to gain from the new sheriff in town. A Dawg can hope right?

As for the trivia, it was like an order at Waffle House, scattered in different directions and covered in hopes and dreams. Here's how it played out:

So, by my count TNRLM was the first with the complete correct answer. Therefore he gets Stephen Garcia's first bloody mouthpiece delivered Monday September 13th by FedEx Ground. Blake is a big time Dawg, but also a former Gladiator under the legendary Coach Henderson. So he gets a free dinner with Damien Gary...at Waffle House. No one could scatter on a punt return like #18! While Ben...he gets an A for his effort(s) and a new bottle opener for all the beer he drinks.

Tune in next week when TrT gets diced and chunked!

Uh, please hand me my prize with tongs.

And Ben? I'll have what he's having!