Monday's Meatloaf - From Folsom With Hate 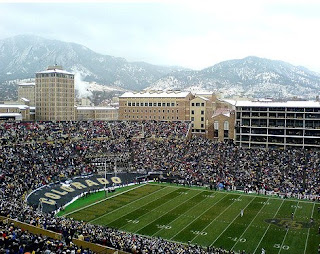 Wait....you hear that? That's a deep breath full of oxygen. It's nice to be back at or reasonably near sea level, where we use trees for paper, gasoline for fuel and bikes for garage sale fodder.


Although the trip out west would eventually end in anger and despair, on the way out to Boulder Friday I couldn't help but feel a little sad. These are trips I really look forward to taking with the Dawgs. I enjoy seeing other stadiums in other cities. I like meeting other fans, both ones who wear red and black as well as other opposing colors. Other than Louisville in 2012, this would stand as the final call for travel Dawgs to venture into out of conference territories.

Don't get me wrong, I am damn glad Georgia got Greg McGarity to come home. I trust him to do what he feels is best for UGA Athletics as a whole. It's hard to argue against his experience. But it's still gonna be hard to let go of boarding a plane and seeing those silver britches under someone else's lights.

And you better believe I'm not the only one. Everywhere I went this weekend we spoke with business owners who only saw two colors, red...and green. The buffalo student section may have treated us rudely, but the Boulder area hotels, restaurant and bar owners couldn't get over how vast the sea of red was and how much money it was willing to spill onto Pearl Street.


And given the 1-4 start here, right now it's hard to envision comforting bowl destinations. 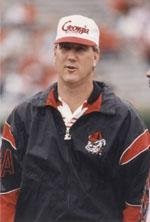 Oh Boulder, how I'll miss you. Some special shout-outs to Bop! Pizza for their organic pies. Yes, that's Bop, as in Boulder Organic Pizza. I laughed at the name too, until I had finished devouring a couple slices. Also to Juanitas for the worst margarita in North America (sidenote: Boulderians evidently refer to them affectionately as margs. Perhaps a better name would be lime flavored dishwater). Seriously, these people couldn't make an acceptable version of this Mexican cocktail if you spotted them a fifth of Patron, two limes and a senorita with a shaker. A straw poll of Georgians who were in the area over the weekend confirms this. 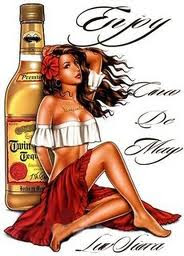 Looking back, I guess I shoulda known it was going to go downhill quickly Saturday after a rousing game of drunken H-O-R-S-E with Travis, who didn't let his lack of a mortgage payment get in the way of his strangely accurate jump shot. Maybe I'll start drinking my Natty Ice tall boys from a paper bag.


But perhaps BulldogJosh illustrates in one picture what a visit to Boulder is like. These folks take their tree hugging and recycling to levels that make Al Gore blush. Allow 20,000 students to say the F word to visitors wearing red is quite acceptable. But nudge a bike rider on Arapahoe Ave in your rented Suburban...or put your recyclable plate anywhere but in the compost pile and you're suddenly being read your Miranda Rights.


But it does have it's highlights, being in Boulder CO. For the first time I drank bourbon out of a biodegradable plastic cup (evidently made from corn). I also had several solicitations to contribute monetarily to marijuana research. I applaud college students who take science seriously. And I was taunted post-game by a denizen who sleeps in a cardboard flat adjacent to a creek bed.

No, it wasn't Travis. But it may have been Mork and Mindy's lovechild. Bastard.


Sorry the meatloaf was late for breakfast Reader. It just took a little longer to cook the hate off. Now go on and get outta here. Unless you wanna help unpack.

Good job representing what Boulder was like Bernie. Besides us getting kicked off the top deck of the parking deck because some ladies that carry wallets in their pockets thought we were gonna burn concrete by cooking up some mudbugs and the extremely rude and inappropriate CU fans, all in all we had a great time with fellow Dawgs and wish we were going to another soon. Oh yeah, we only hit 2 peddlers, but that was in Fort Collins, so that might not count.

You're always welcome to the house that Erk built, and the Prettiest Little Stadium in America. Plenty of space at our tailgate. We'll have a good crowd at the App State game. Think about it.

@BLowe Wish I'd have known about the parking deck fiasco. You coulda come tailgate'N with us. Glad you had a good time overall.

@Heath One of these days I'm going to take you up on that offer. You're a good man!

"Oh yeah, we only hit 2 peddlers, but that was in Fort Collins, so that might not count."

Hey I have a question!

Mark Richt was ripping one of the players a new one - either Boykin or Cuff after the offsetting personal foul penalties. Do you know what that was about? We didn't have a good angle. it looked like he was yelling at #2.

I think it was after a punt return if memory serves. My take was that there was some pushing or shoving, or the like. He was yelling at both initially, but Cuff caught the brunt of it. I don't know what TV showed, but he continuously went back to give him another earful.